‘A Quiet Passion’ surveys the evolution of an artist’s worldview

Geniuses are often misunderstood during their lifetimes. Their eccentricities and alternative viewpoints frequently draw criticisms – sometimes even ostracism – from contemporaries who fail (or refuse) to understand and appreciate them for what they are. In later times, their contributions to humanity often seem patently (and obviously) brilliant. But, in getting to that point, we must first examine how they arrived at their insights, assessing the influences that helped to make them who they were and what their accomplishments are, ideas explored in the engaging, fact-based biopic, “A Quiet Passion,” available on DVD, Blu-ray disc and video on demand.

Nineteenth Century American poet Emily Dickinson (1830-1886) (Cynthia Nixon) is widely regarded as one of the greatest wordsmiths of all time. Her thoughtful, emotive, enigmatic verse is seen as some of the best poetry ever composed. But where did it come from? How did those insightful stanzas arise? That’s what “A Quiet Passion” seeks to explore.

In bringing Dickinson’s story to life, director Terence Davies attempts to show viewers the many influences that inspired the poet’s work, much of it based in fact, some of it somewhat fictionalized for dramatic effect. Regardless of the authenticity of these inspirations, however, the filmmaker effectively presents them to depict how they can help to shape an artist’s thinking and finished works, using Dickinson as an example. 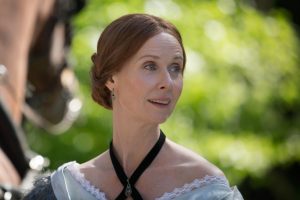 For instance, as presented in the film, Dickinson’s disdain for the control-based aspects of religion figures largely in her outlook and output. Believing that one can come to know the divine for oneself – without others having to dictate how to do so – plays a significant role in her worldview and writings, a development brought about in large part from her schooling at Mount Holyoke Female Seminary, a women’s college that, though officially nondenominational, nevertheless encouraged regular and rigorous religious participation. The aversion to such a dogmatically prescribed notion by a young, independently minded Emily (Emma Bell) undoubtedly helped frame her perspective, even if it was generally met with stern derision by university staff, like the stoic Miss Lyon (Sara Louise Vertongen).

In fact, such questioning of officialdom, authority and arbitrarily sanctioned institutions played a large role in much of Dickinson’s thinking. She abhorred the concept of slavery, as well as the second-class treatment accorded to women of the day. In turn, she wouldn’t hesitate to make her opinion known, especially to the men in her life, such as her father (Keith Carradine) and brother (Duncan Duff), as well as the newspaper owner who published her works (Trevor Cooper). What’s more, she often gravitated toward the company of those of like mind, such as her free-spirited friend Vryling Buffam (Catherine Bailey), and routinely came to the defense of those whom she believed were being treated wrongly, such as her sister-in-law, Susan (Jodhi May). She also sought to inspire those who might all too easily capitulate to the whims of others, such as her sister, Vinnie (Jennifer Ehle).

However, because Dickinson often saw the world so clearly, no matter what façades others may have tried to put up about it, she frequently fell into bouts of melancholy, a condition that grew more pronounced and prevalent over time. This disheartened outlook, combined with the sorrow that came with the loss of loved ones, the senseless horror of the American Civil War and her own failing physical health, led Emily to become increasingly secluded within the confines of the family home. She rarely left the house and even began speaking to others – including family members – from behind the closed door of her room. 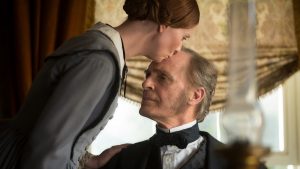 The complex relationship of American poet Emily Dickinson (Cynthia Nixon, left) and her often-stern father (Keith Carradine, right) is one of many complicated personal interactions explored in the fact-based biopic, “A Quiet Passion,” available on DVD, Blu-ray disc and video on demand. Photo © A Quiet Passion/Hurricane Films, courtesy of Music Box Films.

Yet, despite the troubled nature of her worldview, it wasn’t enough to deter Dickinson from writing, and the influences that went into the formation of this outlook became reflected in her verse. Samples of this work, presented through voiceover narrations by the protagonist, appear throughout the film, fittingly accentuating the events unfolding on screen, functioning like cinematic epigraphs to help set the tone for the action playing out at the time. The result is an enlightening portrait of an inspired, if burdened mind.

As should be apparent by now, Dickinson’s poetry is an eloquent metaphor for her worldview, one derived from her thoughts, beliefs and intents. This is significant, for such influences provide the basis of the conscious creation process, the means by which our reality comes into being. So it should come as no surprise, then, that Emily’s verse, like her existence overall, is a mirror of those underlying building blocks.

But why these particular influences? Only Emily herself can answer that, and she might not know herself. In fact, it’s unlikely that she ever heard of conscious creation philosophy. However, as practitioners of this process are well aware, energy tends to flow where consciousness goes, so, if we focus our attention on certain concepts, those are the ones most likely to materialize, be it in our surroundings, the individuals we associate with or even our poetry.

Given the nature of Emily’s beliefs, it would seem that she was functioning as a change agent of sorts, regardless of whether or not she was aware of it, helping to make others aware of ideas that may have received little, if any attention previously. Her views on such notions as feminism, abolitionism, personal spirituality and other progressive ideas were anything but mainstream at the time. But, if they were to ever catch on, someone would have to make others aware of them to get the ball rolling, and who better to achieve this than an accomplished wordsmith? 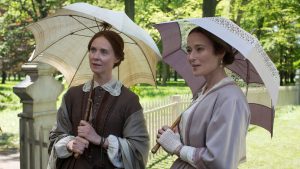 At the same time, though, Emily saw her world so clearly that she seemed to have some trouble separating herself from it. In a reality she saw as being in need of alteration, she unfortunately succumbed to some of the same weaknesses that afflicted the existence surrounding her, as if the elements that went into its creation bled through into her own personal space. This is something conscious creators – especially those who work in reform efforts or the healing arts – should be aware of. It’s one thing to observe and identify the shortcomings of one’s existence, but it’s something else to allow oneself to be consumed by them. That’s certainly a risk in anything we create, and experiencing the attendant pitfalls may even be part of the life lessons associated with such activities, but that need not be the case, as long as we build in beliefs making the appropriate accommodations. Emily’s experience in that regard thus provides us with a significant cautionary tale in what we create and how we create it.

Appropriately titled, “A Quiet Passion” aptly captures the essence of Dickinson’s world and mindset, showing viewers how she came to be who she was. Nixon delivers a superb performance as the conflicted soul, effectively depicting the many moods, from reflectiveness to desperation, of the troubled protagonist. The film also contains some of 2017’s best writing, with a screenplay that deftly combines wit, poignancy, sagacity and resolute indignance, revealing the many sides of a poetic enigma. Admittedly, the picture has some pacing issues, perhaps an unavoidable problem given the nature of the narrative (and one that may not even be resolvable with editing tweaks). However, despite this issue, the film is worthwhile viewing as long as you’re not in any hurry to get to the end. 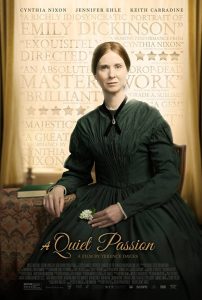 Appreciating geniuses usually takes some effort – getting to know the individuals, the thoughts that go into their thinking and the true meaning behind their work. Failing to do so may cause us to lose out on becoming acquainted with a truly inspired mind. Thankfully, films like “A Quiet Passion” help to show us what we can avail ourselves of when we make that effort – and the rewards that can come from doing so.