When opportunity knocks, it may be tempting to pursue it with all the gusto we can muster. The rewards awaiting us can be incalculable. But what if such a quest prompts us to engage in questionable, almost Machiavellian behavior? Is the prize still worth it if we must go to such extreme, unethical, immoral lengths? It probably depends on one’s mindset and ambition, qualities examined in detail in the dark new political satire, “The Death of Stalin.”

In 1953, longtime Soviet dictator Josef Stalin (Adrian McLoughlin) met his demise, opening up the door to a host of prospective new leaders. But, like the aggressive residents of a koi pond all jumping over one another to get to the fish food tossed their way, the coterie of would-be successors who once unabashedly sucked up to the old man eagerly began positioning themselves for a power grab, their true intentions and natures at last surfacing. However, given the complicated dynamics of this situation, who would come out on top? For each of the contenders, this represented a challenge that meant balancing a number of complex issues, some personal, some political – and all of them heavily invested in self-interest. 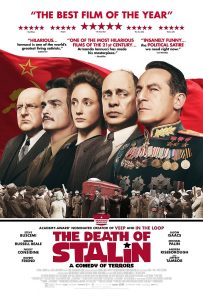 The leading candidate was Stalin’s deputy, Georgy Malenkov (Jeffrey Tambor). But, as a weak-willed, often-clueless apparatchik, he often didn’t know what to do now that he didn’t have his boss around to dictate his every move. Then there was rising politico Nikita Khrushchev (Steve Buscemi), a savvy operator who claimed to be a reformer but who always looked out after himself first, never hesitating to screw over others in the inner circle if it would work to his advantage. Of course, Malenkov and Khrushchev also had to deal with Lavrentiy Beria (Simon Russell Beale), the sinister, scheming head of the NKVD, Stalin’s secret police force, which was known for its efficiency in making enemies of the state – or the premier – disappear on a moment’s notice.

As the big three battled it out, several other ministers (Michael Palin, Dermot Crowley, Paul Whitehouse, Paul Chahidi) vied for their place in the thick of things, too. But they, like everyone else, also had to contend with the involvement and influence of others, such as Stalin’s children, Svetlana (Andrea Riseborough), a somewhat-sheltered but often-hysterical protector of her now-deceased doting father’s reputation, and Vasily (Rupert Friend), a manic, self-important ne’er-do-well with alcohol issues and a history of being shuttled off to projects to keep him occupied (and out of sight) but who now wanted to play an active role in glorifying his old man’s legacy. And then there was Field Marshal Zhukov (Jason Isaacs), head of the Soviet Red Army and a decorated World War II hero, who wanted to make sure his voice was heard, especially now that Beria and the NKVD were trying to marginalize the role of the military and his influence in affairs of state. Meanwhile, lurking in the background were dissidents like concert pianist Maria Veniaminovna Yudina (Olga Kurylenko), who quietly tried to undermine everything – and may have unwittingly had more influence in setting off this scenario than anyone knew.

Set against this backdrop, then, the games – and gamesmanship – began as the country’s leadership (if one could call it that) attempted to sort out its challenges and find direction for its future, a process that proved far easier said than done. With everyone trying to one-up one another, unlikely alliances began to form, arrangements that led to outcomes even more unpredictable than anyone might have imagined.

While this story is loosely (and I do mean loosely) based on the truth, it nevertheless illustrates the pitfalls inherent in these kinds of power struggles. What’s more, even though this story is superficially a dark comedy, it’s ostensibly a potent cautionary tale, one that might easily be viewed as no laughing matter, given the actions that take place and the stakes involved for the population of an entire nation, if not the whole world. 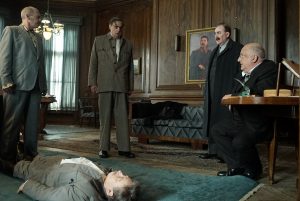 If things don’t always work out as planned for the principals, it’s largely due to the thoughts, beliefs and intents they each harbor, the cornerstones of the conscious creation process and, by extension, the building blocks of the respective realities they manifest for themselves. Given that this process faithfully materializes what we’re focused on, it naturally follows that the existences we experience will reflect their source material, right down to the finest of particulars, whether or not we’re fully cognizant of what they are. The would-be politicos depicted here are by no means immune from this, either, so, if they hope to get the results they want, they – like us – need to have a good grasp on the nature of their beliefs in every respect.

As often happens, however, we may have a handle on the basic thrust of our intents but lack an awareness or understanding of the nuances that further define them – and frequently have influence over how the resulting outcomes manifest. For instance, for the aspiring leaders who claim to be reformers of the brutality of the Stalinist system, they may genuinely believe in the nobility of their cause but lack mindfulness of some of the measures that may be required to achieve that end. The presumed “need” of eliminating enemies who get in the way, for example, might get overlooked or could be viewed as merely part of the process of attaining “a greater good.” In circumstances like that, the manifesting beliefs associated with such “pesky details” may easily be ignored or dispensed with, conveniently rationalized away in the name of “progress,” despite the actual nature of the acts required and the underlying intents involved. But, hey, if an adversary needs to be bumped off to achieve a laudable outcome, there’s nothing wrong in that, is there?

This is where the conscious creation process can get tricky. When our beliefs are qualified by other related intents, the outcomes are generally imbued with elements that embody those underlying qualifying aspects, whether we like it or not. But, because we’re unaware of those influences or willfully choose to ignore them, we may find ourselves disappointed when such results show up as part of the mix. This leaves us with new challenges to sort out, which could prompt new materializing beliefs that are, in their own way, just as compromised as those that led to the unexpected outcomes in the first place.

In many instances like this, such warped results arise from a fundamental intent of attaining success at any cost, regardless of the associated fallout, a practice sometimes called un-conscious creation or creation by default. In such scenarios, we often take an approach that essentially assumes a stance of “consequences be damned.” But that kind of willful shortsightedness nearly always carries unanticipated complications that can range from annoying to catastrophic.

In cases like this, we frequently engage in a practice known as pushing the Universe, our divine collaborator in the conscious creation process. As those well versed in this philosophy know, the energetic and metaphysical co-collaborative resources provided by the Universe are designed to work toward the faithful fulfillment of our underlying thoughts, beliefs and intents. To that end, as it’s often said, the Universe naturally “leans in our direction,” giving us exactly what we need when we need it. However, if we become too aggressive in our approach, we may end up trying to force matters by poking and prodding our collaborator to bring about the results we seek on our time and terms. This usually leads to compromises in the source materials behind our manifestations, which, in turn, frequently result in outcomes reflective of those concessions – as well as disillusionment and unwanted disappointments.

Is that what we really want? Probably not. But it’s what we’re often left to contend with when we don’t pay close attention to our beliefs, as the Keystone Cops of Communism find out for themselves in this film. Seeking power may not be a regrettable goal in itself, but, when its pursuit becomes unduly tainted by intents that cause such a quest to become perverted or compromised in unintended ways, that quickly becomes a problem, one that may carry implications far removed from what was originally envisioned. 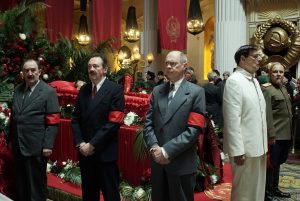 The cautions in this should be obvious. But, all seriousness aide, “The Death of Stalin” is nevertheless a devilishly funny romp that skewers the lunacy of bureaucracy and the buffoonish behavior of the power hungry (the fact that it’s based on a comic book of all things should say a lot about it!) The film’s stellar international cast, combined with a wickedly funny script and endless touches of high camp, make for uproariously funny viewing. Not all of the jokes work, and sometimes the film gets a little too political for its own good, but, these shortcomings aside, director Armando Iannucci serves up loads of big laughs, an effort that earned the picture BAFTA Award nominations for best adapted screenplay and best British feature film. Enjoy, comrade!

Getting what we want need not be a difficult process unless we make it so, and that’s where this picture gives us an excellent look at the pitfalls involved in such distorted game plans. And the message here is by no means limited to the comic madness of the now-defunct Soviet system as it entered into its long, slow, inevitable decline. Those of us who live under conditions afflicted with comparable problems should pay attention if we hope to avoid a similar outcome where we, too, find ourselves eventually coming apart at the seams.