Skip to content
Home/Comedy, Conscious Creation, Movie Reviews/‘Keep the Change’ looks at love in its own unique way

‘Keep the Change’ looks at love in its own unique way

It’s been said that love knows no bounds. But how widely are most of us willing to apply that notion? Does that include only the limited sorts of romantic circumstances with which we’re most familiar? Or are we capable of envisioning it on a broader scale, applying it to scenarios that aren’t neatly compartmentalized into tidy little boxes? For those who have special needs or who represent constituencies outside the mainstream, we may not readily consider their situations and requirements, even though the need is just as valid – and viable – as it is for the rest of us. Those are among the issues explored in the inventive new romantic comedy, “Keep the Change.” 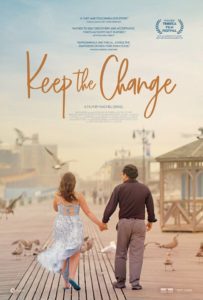 When David Cohen (Brandon Polansky) is assigned to attend sessions at a support group for adults with special needs, he’s not thrilled with the idea. Having committed some kind of minor, unspecified criminal infraction, the 30-year-old would-be filmmaker is ordered to spend some time at Connections, an organization aimed at assisting adults living with various forms of autism and learning disabilities. But David, who lives a comparative life of privilege with his affluent parents, Carrie (Jessica Walter) and Lenny (Tibor Feldman), strongly resents the idea, finding the group, its participants and its programs unduly limiting. And, after his first session, he rails at having to go back. However, Carrie convinces him to return in order to restore all of the rights and privileges to which he’s grown accustomed.

Not all is lost, however. During his time at Connections, David gradually becomes acquainted with another of the organization’s clients, Sarah Silverstein (Samantha Elisofon), a bubbly, enthusiastic, fully engaged participant in many of the program’s available activities. Although David initially finds Sarah somewhat annoying, a mutual attraction slowly simmers, especially when she unreservedly admits that she finds the newcomer “smokin’ hot.” Before long, David and Sarah become an item, with the warmth between them obvious for all to see.

But not everyone is thrilled about the new couple’s romance. Sarah’s onetime beau, Will (Will Deaver), for example, is more than a little jealous. Carrie and Lenny have their reservations, too, convinced that Sarah is a gold-digger, someone not worthy of their son’s affections (or assets). What’s more, the relationship itself is not without its challenges, given the condition (and attendant ramifications) that each of them must cope with. Considering their lack of “filters,” for instance, each of them unwittingly engage in what some might characterize as inappropriate behavior, creating potentially embarrassing or awkward circumstances for themselves, with each other and for those around them. 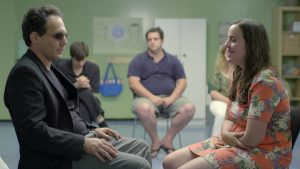 Nevertheless, David and Sarah show us what it means to really be in love, no matter what others may think, say or do. They thus demonstrate the undeniable power of this emotion and what it can do for us in transforming our lives – and in allowing us to truly be ourselves. In fact, in some ways, the couple may have an advantage over pairs with more traditional sensibilities because of their lack of the aforementioned filters. They don’t know how to be phony, letting their true selves, feelings and beliefs come flowing forth.

That can be a decided advantage when it comes to employing the conscious creation process, the means by which we manifest the reality we experience though the power of our thoughts, beliefs and intents. Those who tend to get the best results with this practice do so when these underlying metaphysical building blocks are expressed in their truest (i.e., least tainted) sense. The thoughts, beliefs and intents in those situations are honest, unfettered by the often-contrived (and less than genuine) considerations designed to accommodate what are often seen as perfectly acceptable social graces, taboos and personal façades. The absence of these forms of artifice thus allows David and Sarah to be themselves and to express themselves freely, without reservation.

Because of this, one gets the impression that those who operate from such a standpoint probably have the best chances of creating workable, harmonious relationships. They needn’t worry about pretense or the “what would people think” issues that frequently inhibit – and may even sabotage – the success of many other pairings.

The principles involved in this are applicable to more than just romance, too. Taking such a direct, integrity-laden approach to our beliefs makes it possible to achieve desired outcomes more easily in pursuing virtually any form of endeavor or in manifesting any other aspect of our existence. Indeed, those of us who are uncomfortable around such unencumbered individuals – or who may even feel “embarrassed” for the nature of their situations – could end up learning a lot from these unlikely role models, especially in terms of being honest with ourselves, our beliefs and what we intend to manifest with them. 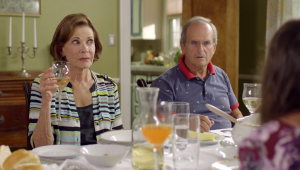 When an adult autism support group member announces his budding new romance to his affluent parents, Carrie (Jessica Walter, left) and Lenny Cohen (Tibor Feldman, right), he’s met with a less-than-enthusiastic response when they reveal their concerns, as seen in the new independent release, “Keep the Change.” Photo courtesy of Kino Lorber.

A large part of the success David and Sarah experience stems from their willingness to think outside the box, to sincerely ask themselves “why not?” when it comes to forging a relationship of their own. This requires an aptitude for envisioning alternatives that aren’t necessarily mainstream. It also calls for shedding the fears that can hold us back and keep us from attaining the true happiness that’s just a few unconventional beliefs away.

Through their experience, then, David and Sarah show us much about love and life. While it’s true they may have their share of challenges to contend with, they also have skills to teach us, abilities that we can adapt to produce fulfilling outcomes for ourselves, be it in love or otherwise.

Based on a short subject by the same name, “Keep the Change” represents an impressive feature film debut for director Rachel Israel, one that’s justifiably been drawing raves among both critics and audiences. This touching, sweet romantic comedy has a definite point of view, as well as a definite edge, one that takes chances other films in this genre probably could not get away with (don’t be surprised if you often find yourself snickering at things you think you shouldn’t be laughing about). The heartfelt romance between the developmentally challenged leads comes across as nothing but genuine while successfully maintaining a high degree of irreverence and ever-present unpredictability. And the filmmaker’s bold decisions to cast actors coping with autism and to employ innovative directorial techniques designed to encourage spontaneity among the cast members add ample degrees of authenticity that make the picture truly unique and wholly believable. This charming offering definitely pokes fun at a lot of sacred cows while simultaneously poking viewers in the ribs virtually nonstop from start to finish. It’s a flat-out winner for sure. 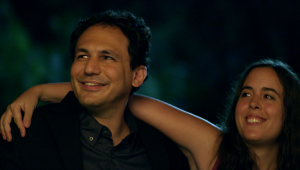 Some may find the notion that “love conquers all” a little naïve, perhaps even unrealistic. Yet, as many of us well know, it can prove to be a valuable ally in helping us deal with difficult circumstances, especially those that might otherwise sap all of the life and enthusiasm out of us. So, in circumstances like that, it’s comforting to know that it can help steer us through the rough patches and make them more tolerable – maybe even outright enjoyable – especially when we find the right companion to come along with us for the journey.