As the years pass by, it can be easy to let our lives (and ourselves) slide. Those of us who have attained a certain age may unwittingly fall into the trap of believing that the best years are behind us, that the joys of our youth and young adulthood are no longer available or take too much effort to recapture. This is especially true when it comes to our love lives. But is that really the case? It might take a little initiative to get back what’s been lost, but it is indeed possible – and worth it – as a quartet of seniors discover for themselves in the new romantic comedy, “Book Club.” 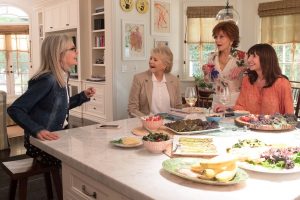 When four friends form a book club, who thought they’d still be meeting 40 years later? But so it is with Diane (Diane Keaton), Sharon (Candice Bergen), Carol (Mary Steenburgen) and Vivian (Jane Fonda). The vibrant, spry seniors are all going strong in their lives except in one very important area – the romance department. But, then, each of them has her own challenges: 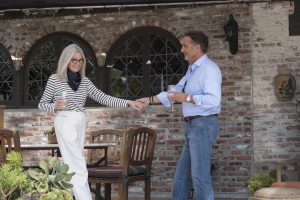 Realizing these predicaments, Vivian decides to do something about it. When it’s her turn to choose a book for the club to read, she decides to shake things up by selecting Fifty Shades of Grey by E.L. James. If that saucy tale of sexual escapades doesn’t get the girls stoked up once again, she reasons, nothing will.

When Vivian announces her selection at a club meeting, her cohorts resist the idea. Given the book’s tawdry reputation and the respectable menu of titles they’ve read over the years, the other club members can’t see themselves perusing the pages of something as pulpy as the steamy best-seller. But, after they begin reading, they become unexpectedly captivated. What’s more, they find themselves inspired, prompting them to begin acting on their impulses – and their hormones – to get funky once again:

So what accounts for this change? It comes down to a matter of beliefs, the stuff of which our reality is made, thanks to the conscious creation process, the means by which those metaphysical building blocks are transformed from intangible ideas into manifested conceptions. And, specifically, it’s the changes in the women’s beliefs that bring out their new realities. Several factors figure into this.

For starters, Diane, Sharon, Carol and Vivian all realize that they’re not stuck with their circumstances; they have the powers of choice and free will at their disposal, and, should they opt to make use of them, they can re-create their existences in any way they like. However, they have to take the first step to make that happen. This can come about in a variety of ways, but, as with most of us, they must first grow so dissatisfied with their realities that they desire something new to take their place. But, also like many of us, they need some kind of catalytic inspiration to get their visionary juices flowing, and that’s where E.L. James comes in.

To bring about the change they want, the women must address the specific beliefs that are keeping them locked in place. Essentially they need to move beyond whatever is inhibiting them. Some may seem them, kindly, as apprehensions; others may view them, somewhat less delicately, as excuses. But, no matter what anyone calls them, at their heart, the beliefs that are holding them back are fundamentally limitations, and it’s those limitations that must be overcome if they want something new in their lives. 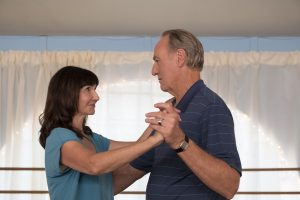 Each of the women has her own limitations to get past, and addressing the specific self-imposed roadblocks they’ve set up for themselves is crucial to moving beyond them:

Themes like these have become quite common in movies these days, but they seem especially pertinent for this band of characters (and the demographic to which this movie appeals). As we age, unfortunately, we tend to grow less flexible in out outlooks, a perspective that can significantly inhibit our enjoyment of life and our prospects for the future. That’s important to bear in mind for seniors. They must ask themselves, “With the clock running out, how long are we going to wait?” In that light, then, this film offers those who are a little on in years a potent cautionary tale, especially for those who’ve lost their ambition or expectations of anything better coming along. By simply asking “Why not?” rather than perpetually defaulting to “Why should I?”, they may find some exceedingly pleasant surprises in store.

In a world that worships youthfulness and all too readily shuttles the mature set out to pasture, it’s refreshing to see a story like this. It celebrates aging and demonstrates that it needn’t be looked upon as a time of life characterized by bland food, mahjong tournaments and lonely evenings in front of the TV with the volume turned up high. It truly can mean a fresh start, one full of vibrancy, engagement and maybe even a little naughty behavior. Indeed, this film shows that it’s never too late to have fun and enjoy life, no matter what ad agencies, social media and allegedly in-the-know trend influencers might say.

Put simply, “Book Club” is a real joy. What a treat it is to see a quartet of veteran performers doing what they do best and quite obviously enjoying themselves at it! This light, frothy, albeit somewhat predictable chick flick for the mature set clearly has its heart in the right place and hits the right notes most of the time. Granted, some of the jokes don’t land as solidly as they could, particularly in the first 30 minutes, and some of the humor is a little on the trite side. But, all things considered, this is still one fine diversion, full of fun, full of spirit and full of life, especially for those who can appreciate where its protagonists are coming from and are in need of a few good laughs. 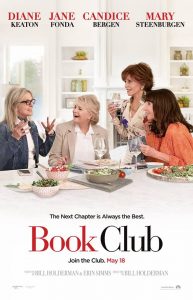 As the years pile up, it’s all too convenient – and perhaps even a little tempting – to grow complacent and settled, stuck in a rut of our own making. We can slip into it so casually that we might not even realize we’ve done so until we’re in the throes of it. But the examples in this film show what it means to come alive again, to rejoin those who enjoy life. And to think it can all start with something as simple as picking up a book – or watching a movie.