Skip to content
Home/Conscious Creation, Drama, Movie Reviews/‘Leave No Trace’ asks us to understand the nature of our creations

Given the state of the world today, many of us have probably contemplated the notion of getting away from the stress of daily life, living off the grid to achieve a simpler existence. Eschewing a routine fraught with economic, social and even interpersonal tensions in favor of a more idyllic existence no doubt holds much appeal to those who feel overwhelmed by the spiraling demands of living in an increasingly frustrating world. Those who have a particularly difficult time coping with such conditions may find the prospect especially attractive. But is this really the answer? Or are other arrangements more suitable? And are we going about exercises like this with a clear mind and for the right reasons? Those are the issues faced by a father and daughter seeking to find answers for themselves in director Debra Granik’s emotionally powerful new drama, “Leave No Trace.”

Will, a middle-aged single father and former Marine (Ben Foster), and his teenage daughter, Tom (Thomasin Harcourt McKenzie), live an unconventional life in the forests near Portland, Oregon. Their secluded base camp provides them the necessities of life, as well as a few modest comforts and the materials necessary for Tom’s education. They grow or hunt for much of their food, but they periodically venture into civilization to obtain what Mother Nature doesn’t provide for them. It’s a life that demands much, but they seem fairly content, unburdened by many of society’s frustrations. 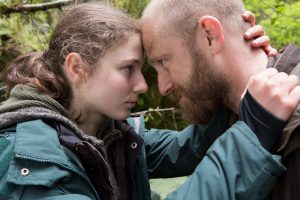 Living off the grid in the woods offers single father and former Marine Will (Ben Foster, right) and his teenage daughter, Tom (Thomasin Harcourt McKenzie, left), a chance to escape the frustrations of society in the powerful new drama, “Leave No Trace.” Photo by Scott Green, courtesy of Bleecker Street Media.

Perhaps the biggest challenge Will and Tom face is keeping themselves from being discovered. They periodically conduct drills where they practice hiding from authorities who might try to forcibly remove them from squatting on public lands. Otherwise, though, they appear to have their bases covered and their stress level relatively under control. And that’s important for Will, given that he suffers from PTSD.

Try though they might to remain inconspicuous, however, Will and Tom are eventually found out. They’re removed from the woods and placed under the auspices of social services. Father and daughter are assigned to two social workers, Jean (Dana Millican) and James (Mike Prosser), to assist them in their return to society. They arrange housing for Will and Tom in a small but comfy home located in a rural setting, placing them in conditions not identical but similar to what they previously had. They also secure work for Will as a farmhand at a Christmas tree nursery, an offer extended by the company’s kindly owner, Mr. Walters (Jeff Kober). Tom, meanwhile, gets an opportunity to meet other local teens, enabling her to form social connections with peers, probably for the first time in her life. She takes a particular liking to Isaiah (Isaiah Stone), an aspiring farmer with an affinity for raising rabbits. 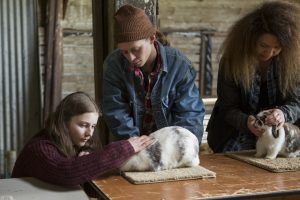 However, despite the comparatively inoffensive nature of these new arrangements, Will quickly grows restless. He feels trapped, that he’s being forced into “adapting” to a world of which he wants no part. Tom tries to convince him that their new circumstances aren’t so bad, that they can learn to adjust to them, and that they always have the freedom to think their own thoughts, no matter how conventional their housing or work arrangements might be. But, as assuaging as Tom tries to make her arguments, she’s unable to sway her dad’s feelings, and, early one morning, he wakes her so that they can hit the road to escape – and to launch into a journey with an uncertain future.

With no definitive sense of direction, the duo quickly becomes lost, both literally and figuratively. Over the course of their odyssey, they encounter a number of challenges, some of which they’re not prepared to handle, despite their years of experience living off the grid. Several Samaritans cross their path to offer help and insight, including a friendly truck driver (Art Hickman), the manager of a small woodland trailer park (Dale Dickey), a former military medic (David M. Pittman) and a thoughtful beekeeper (Susan Chernak McElroy). But, even with such assistance, their fate is unclear, partly because of the unexpected perils they face, as well as a growing distance that’s opening up between father and daughter. With the emergence of differing agendas, the closeness that has long characterized their relationship is being put to the test.

Can the bond between Will and Tom survive this latest ordeal? That obviously remains to be seen. Much depends on their respective abilities to see their situation for what it really is. The time has come for them to examine why they’re living as they are, whether it will suffice for the future and what, if any, changes need to be made to suit their individual needs. The biggest question, though, is “Are they up to it?” 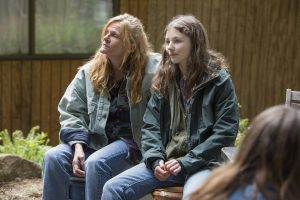 Whether Will and Tom can handle this ultimately depends on how they make use of the conscious creation process, the means by which we manifest the reality we experience through the power of our thoughts, beliefs and intents. But an assessment of their skills in this area may not be as clear cut as one might think.

For instance, considering how long (and apparently how well) Will and Tom managed to live off the land, one might be convinced that they are quite adept at using their beliefs to successfully create an alternate lifestyle. They were obviously able to envision such a result, handily having made a clear choice for themselves, overcoming any fears that might have stood in their way and pushing past limitations that could have blocked their path.

But is the creation of a successfully manifested material outcome all there is to this? While it’s true that Will and Tom are quite capable of working out the mechanics of achieving the result they want, can the same be said for them arriving at an understanding of why they did it? What were the beliefs that drove their reasons for why they did what they did?

Superficially speaking, one could say that their reason for creating a sustainable life in the woods was to enjoy the benefits of living off the grid, of getting away from the troubling trappings of modern society, an effort not unlike what Henry David Thoreau did when he moved to Walden Pond. However, as becomes apparent over the course of the film, Will, it seems, has also made this move to escape the pain of his past, including the loss of his wife and the trauma associated with his military service. 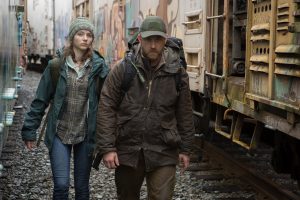 In light of the foregoing, one can’t help but ask, was Will invoking beliefs aimed at genuinely seeking solitude from his pain, or was he simply running away from his life? Based on how events unfold, one could make a good case for either contention. However, the further one gets into the story, it’s easy to see that Will’s anxious to hide at almost any cost, even going so far as to move forward without a plan for how to proceed, a circumstance that could lead to calamity. This is un-conscious creation at work, where attaining a desired outcome outstrips any associated considerations, most notably consequences, a potentially perilous prospect.

The ramifications behind this could be staggering, especially for Will. Even though he may be able to physically escape to the woods, can he really evade his personal demons? Unless he makes an attempt at implementing beliefs aimed at addressing this issue, it will continue to dog him, no matter how far he gets away from society.

What’s more, Will assumes that, because Tom is his daughter, she will automatically follow him, as her provider, wherever he goes, even if his actions (and the beliefs behind them) don’t make sense or fail to meet their respective needs. But is that indeed true? With Tom reaching the age where she’s able to assert her independence, who’s to say that she will just go along with what Will does simply because he’s her father?

These considerations thus illustrate the importance of clearly understanding the nature of our beliefs, for what we experience in our reality will flow forth from them. We must also be honest with ourselves about them, because, if we’re not, we run the risk of falling prey to wishful thinking, leading to results that are distorted or could culminate in disappointment and disillusionment. There are lessons in this for both father and daughter, but they’re especially critical for Will, not only in terms of his quality of life, but also for his relationship with Tom and, above all, his peace of mind. To put it metaphorically, the forest will always be there, even if we can’t see it for the trees; yet, if we hope to benefit from everything the woods have to offer, we had better make sure our vision is sharp, especially when it comes to the beliefs we employ for bringing them into being. 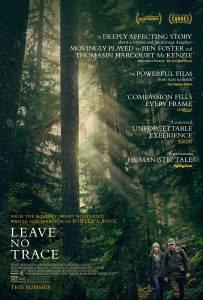 “Leave No Trace” offers viewers a powerful tale about living off the grid, dealing with adaptation to society’s expectations and reconciling our feelings about our past. The film’s superb performances and beautiful cinematography lend much to an engaging story that undoubtedly captures the kinds of smoldering sentiments many of us feel but don’t necessarily have the courage or wherewithal to act upon. Admittedly, he narrative meanders a bit much at times, but, considering the nature of the story, that’s probably not entirely unexpected. A little tightening in the editing, as well as a better fleshed-out back story, would have helped considerably, changes that could have made a good film a truly great one (though, as it stands now, it’s certainly one of 2018’s better offerings).

Living our lives with personal integrity is undoubtedly a noble pursuit, even if it just means creating a satisfying personal existence that suits our individual perspective and not necessarily fulfilling lofty accomplishments that benefit greater mankind. But, in pursuing such a path, we must be conscious of what we do, to live with awakened, informed intent and presence of mind. To do otherwise can lead to an exercise in self-delusion, one that could possibly leave us interminably lost in the woods of our being with no way out.