‘Sorry to Bother You’ wrestles with destiny, integrity

What does it mean to be in charge of your own destiny? Do you have a handle on what you want and what you’ve created for yourself? Or have you been swept up with the current, unwittingly fulfilling others’ agendas, bringing you material success but prompting you to compromise your values and integrity? And, if so, how do you proceed? Those are some of the thorny questions probed in the hilarious, biting, new satire, “Sorry to Bother You.” 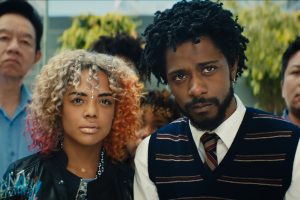 Cassius Green (Lakeith Stanfield) desperately needs a job. The long-unemployed African-American Oakland resident lives with his aspiring performance artist fiancé, Detroit (Tessa Thompson), in the garage of a home owned by his Uncle Sergio (Terry Crews). He drives a clunker car and is months behind in his rent payments, threatening his uncle’s ability to hold onto the house. He really needs to get back to work.

For what it’s worth, Cassius lands an entry-level position at a somewhat sleazy telemarketing company run by a team of oily managers and supervisors (Robert Longstreet, Michael X. Sommers, Kate Berlant). And, at least initially, the job proves to be a rather thankless slog where his calls constantly meet with abrupt ends and success is highly elusive. However, thanks to the advice of his seasoned co-worker, Langston (Danny Glover), Cassius manages to reverse his misfortunes by effectively employing his “White voice,” an attribute to which customers respond favorably. He’s such a whiz at employing it, in fact, that he gets promoted to the position of “power caller,” a high-paying job reserved for a few gifted telemarketers who’ve demonstrated their ability to sell just about anything to anyone.

High-powered telemarketer Cassius Green (Lakeith Stanfield, right) runs afoul of his friends and former co-workers, Salvatore (Jermaine Fowler, left) and Squeeze (Steven Yeun, center), when he sells them out in the outrageous new comedy, “Sorry to Bother You.” Photo courtesy of Annapurna Pictures.

However, unlike the books he had been selling in his original position, Cassius now finds himself being tasked with peddling more questionable commodities, including, among other things, the services of indentured workers whose labor is tantamount to modern-day slavery. Such prospects give him momentary pause, but that hesitation quickly evaporates when he sees the kind of money he can make by going along with the program. Within no time, Cassius sees himself earning fortunes far greater than he ever could have imagined. He’s able to trade his uncle’s garage for a luxury apartment and to obtain a snazzy new set of wheels. He’s living large, to be sure, but it comes at a cost, most notably in his relationships with Detroit and with his friends and former co-workers, Salvatore (Jermaine Fowler) and Squeeze (Steven Yeun).

If that weren’t enough, though, the stakes soon get raised even higher when Cassius is offered a lucrative but dubious new job from Steve Lift (Armie Hammer), owner of a conglomerate that’s his employer’s largest client. However, when Cassius learns what would be expected of him, he’s appalled at the prospect, one that would require some truly unnatural efforts on his part. He must now decide what his soul is worth to him – and whether or not that’s something he’s willing to sell.

These are questions many of us face from time to time, be it in our work lives or in other significant contexts. They often push us to come to terms with who we are and what we’re willing to do, essentially meeting our personal integrity head on. And “Sorry to Bother You” never hesitates to squarely confront these issues from a variety of angles. In doing so, the film offers biting social commentary on a variety of fronts, including the conditions of the lives of the working class, the disparity between haves and have-nots, and the shocking lengths that the greedy will pursue in the name of wealth acquisition. What we think about these issues can have staggering implications.

What one thinks, of course, is a central theme in the film, especially where Cassius is concerned. Given the circumstances that unfold in his life, his beliefs about who he is, what he wants and what he’s willing to do are constantly put on the spot. How he responds through those beliefs is crucial, too, for that will determine what materializes in his everyday existence, thanks to the conscious creation process, the means by which we manifest the reality we experience through the power of our thoughts, beliefs and intents.

Cassius’s responses vary from knee-jerk reactions to deliberate decisions. When his back is against the wall and survival is on the line, he needs to deal from a position of expediency, and his beliefs (and their resulting creations) assume forms that fulfill those requirements. But, once he attains a modicum of sustainability and comfort, his beliefs present him with choices – options unlike anything he’s had access to previously. And those choices place him in a position where he gets an opportunity to assess and act upon his values and integrity, qualities that are directly in line with the nature of his true self.

How will he respond? That depends on the circumstances and how he believes he can fit into them. Is he willing to turn a blind eye for a fat paycheck? Or is his concern for the society of which he’s a part a more important overriding consideration? In conscious creation terms, there are no right or wrong answers in this regard, only choices. But, in light of the consequences that can arise from our belief decisions, we’d be wise to evaluate our options carefully, for the fallout can have staggering implications – and they can materialize with surprising ease and speed, sometimes appearing before we ever realize what’s happened. 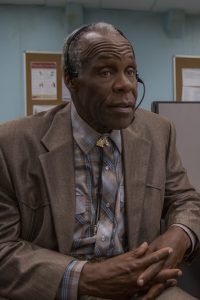 Seasoned telemarketer Langston (Danny Glover) offers a co-worker advice on how to succeed in his career by making use of his “White voice” in the biting new satire “Sorry to Bother You.” Photo by Peter Prato, courtesy of Annapurna Pictures.

These questions are largely addressed through career track considerations. That’s certainly significant, given that our very livelihood depends on what we do about them. But, as the film shows, there’s a carry-over effect that impacts other parts of our existence. Since our working life is based on the relationships we build with others – some of which are close, such as those we have with colleagues, and others that are more removed but nevertheless significant, such as those we forge with customers – there’s a personal aspect that comes into play as well, one that can have significant ramifications. If we take a cavalier attitude with our belief decisions, even with vocational concerns, there may be implications that leave lasting impressions, some of which can be hurtful in our interpersonal dealings. Are material gains worth the cost of potentially harming those we claim to care about? This is where paying attention to our integrity – and forming beliefs in line with it – become utterly critical.

However, in addressing all of these matters, the film is far from all seriousness and oppressive gloom and doom. Rather, it skewers these topics with biting satire that serves up big, outrageous laughs that also make viewers think. Without a doubt, director Boots Riley’s feature film debut is one of the weirdest, wildest movies I have ever seen – so strange, in fact, that I’m amazed (but thankful) that this project got the green light to go forward. This dark, poignant comedy weaves elements of satire, sci fi and social commentary along with a plot that keeps viewers guessing from start to finish, with unforeseen twists thrown in at seemingly every turn. Not all of the jokes land successfully, and even some that do work at times seem out of context, but the bulk of the humor is uproarious, over the top and tinged with thought-provoking observations. The picture also provides a superb showcase for Stanfield, who is clearly stepping up as an acting force to be reckoned with. To be sure, “Sorry to Bother You” won’t appeal to everyone, but those who have an off-the-wall sense of humor and enjoy unconventional offerings like “Get Out” (2017), “Brazil” (1985) and “Liquid Sky” (1982) will certainly appreciate this one. 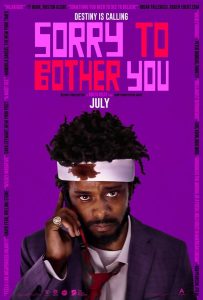 Most of us will likely agree that aiming for the stars is a laudable goal. But how far are we willing to go to reach them? That’s something many of us are having to ask ourselves these days, and that’s certainly something none of us should look at as being a bother.