Bringing hateful practices to light takes guts. Sometimes it also takes creativity, especially when those vile matters are carefully hidden or carried out by those who operate in the shadows. But, when courage and innovation successfully join forces, the ugly truth can be exposed for all to see, drawing attention to the detestable nature of these concerns, a notion explored in director Spike Lee’s new fact-based film biography, “BlacKkKlansman.”

When Ron Stallworth (John David Washington) joined the Colorado Springs Police Department in 1972 as its first African-American officer, he was initially assigned to the records department, a dead-end job in which he was routinely mistreated by co-workers. That soon changed, however, when the department’s top cop, Chief Bridges (Robert John Burke), tapped Stallworth for an undercover intelligence mission – to attend and gather information about the mood and attitudes of the Black community at a rally featuring Kwame Ture (formerly Stokely Carmichael) (Corey Hawkins), one of the founders of the Black Power movement. 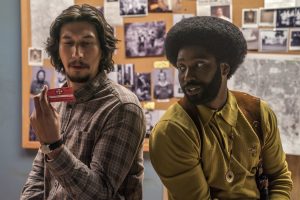 Based on the success of that mission, Stallworth was soon appointed to a full-time position in the intelligence department. While reading a newspaper one day, he came across an ad seeking recruits for the local chapter of the Ku Klux Klan. Acting on an impulse, he responded to the notice, seeking to infiltrate the White supremacist organization. There was just one problem: Given his ethnicity, there was no way he could have any face-to-face contact with any of the Klan’s members. And, because he couldn’t conduct an investigation entirely by phone, he needed to come up with a creative solution to proceed.

To compensate, Stallworth called upon his fellow detective, Flip Zimmerman (Adam Driver), to impersonate him. This was a risky proposition, not only for the potential slip-ups that could undermine their operation, but also because Zimmerman was Jewish, a community the Klan scorned almost as much as it did Blacks. Consequently, they had to get their stories straight, because, if either of them should act or speak inconsistently, their cover would be blown and the investigation compromised.

Nevertheless, despite these possible pitfalls, “the Stallworth brothers” proceeded with their plans. Zimmerman met with the leader of the local Klan chapter, Walter Breachway (Ryan Eggold), and his radical, hot-headed  lieutenant, Felix Kendrickson (Jasper Pääkkönen). While Walter appeared to trust the newcomer and his motivations, Felix – ever the skeptic – suspected that the new recruit might be either a cop or Jewish (or both). He actively sought to verify Flip’s “sincerity” by trying to force him to prove his intentions, such as coercing him into taking a lie detector test, an incident that seriously tested the viability of the investigation. 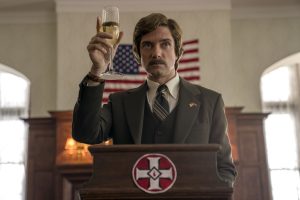 Considering the delicate nature of their operation, the detectives obviously needed to progress cautiously. At the same time, though, Stallworth wanted to move things forward aggressively. For instance, given the slow pace of getting “his” membership application approved, Stallworth sought to expedite matters by reaching out to the Klan’s national leader, Grand Wizard David Duke (Topher Grace), to see if he could intervene on his behalf. And, after a phone conversation in which he thoroughly charmed the big boss, Stallworth managed to get his request granted. Before long, Flip had his new membership card in hand.

As all this played out, Stallworth also wrestled with striking a balance between his personal feelings and his professional duties. While he naturally wanted to see his fellow African-Americans become empowered and respected, he needed to make sure that his work didn’t turn into a personal vendetta, a significant challenge to be sure.

Avoiding such potential conflicts of interest also became apparent in Stallworth’s budding romance with Patrice Dumas (Laura Harrier), president of the Black student union at Colorado College, which sponsored the Kwame Ture rally where the two first met. Again, Stallworth needed to balance his personal feelings with his professional duties, given that Dumas was a potential contact in an official capacity. What’s more, even though he appreciated Patrice’s passion for her cause, Stallworth also believed that the pursuit of personal empowerment and the need for law and order were not mutually exclusive issues. This is why he kept his profession a secret from Patrice, because he knew that, if he revealed this information to her, considering her disdain for the police, she would drop him in a heartbeat, both as a professional contact and as a would-be romantic partner. This was yet another tightrope to be navigated. 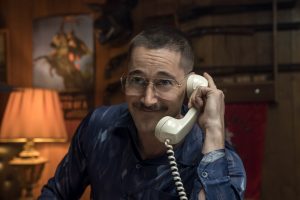 All of these elements came to a head when Duke announced that he personally planned to visit Colorado Springs to officiate at Flip’s initiation. To complicate matters, this ceremony was scheduled to coincide with a high-profile presentation to the Black student union by Jerome Turner (Harry Belafonte), a witness to the historic and horrific 1916 lynching of teenage farmhand Jesse Washington in Waco, Texas. Thus, with the two events running parallel to one another, the fuse was lit. This combination of events carried the potential for explosive consequences, circumstances that could easily plunge the community and its various constituents into peril.

When attempting to snare potential or alleged perpetrators who employ unconventional, underhanded tactics, it often takes comparably unconventional measures to catch them in the act, especially when such bad actors are practiced at skillfully using camouflaged methods to conceal themselves. This requires thinking outside the box, pushing the limits of tried and true methods to accomplish sought-after goals. It’s not always easy, yet it’s a cornerstone principle to achieving success with the conscious creation process, the philosophy that maintains we manifest the reality we experience through the power of our thoughts, beliefs and intents.

Even if he never heard of this practice, Ron Stallworth was a master at this. For instance, his hiring into the Colorado Springs Police Department as a Black applicant – the first person ever to have done so – illustrates his ability to envision outcomes that defied custom. However, this was just the beginning of his string of successes. When he pitched his superiors about transferring into investigative work as a rookie, he was taking on what most everyone saw as a Quixotic task – yet, despite such seemingly long odds, he managed to land an undercover assignment not long thereafter, one that led to the fulfillment of his objective of securing a job as a full-time detective. And then, of course, there was his proposed sting operation for taking on the Klan, something that peers initially scoffed at but that, with a little creativity, flourished and took on a life of its own.

Stallworth wasn’t the only one who succeeded at this. Zimmerman was equally adept at making things work. On numerous occasions in his dealings with Klan members, for example, he was faced with big challenges at passing himself off as one of them. He frequently had to represent himself as something he wasn’t. And, when confronted with circumstances where he had to respond on the fly, he had to act fast – and convincingly – to keep his cover. But, despite the seeming difficulty involved, on some level, he knew he could do this; when he had to think on his feet and come up with outlandish responses on the fly, he always managed to rise to the occasion – and made it look easy. 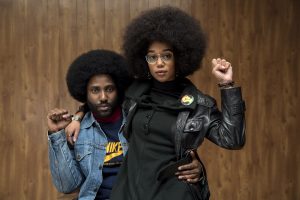 So why did these extraordinary plans work? It was their beliefs – specifically their beliefs in themselves and their abilities to accomplish their goals. Even if Stallworth and Zimmerman didn’t necessarily know how to achieve them when they first started out, they were each able to tap into a wellspring of self-confidence, tremendous faith in their capabilities and an unshakable knowledge that their plans would work.

The beliefs driving such attributes exude personal power. That’s because they’re backed by underlying core notions that they knew their divine collaborator – the Universe, All That Is or whatever you want to call it – would support them in their efforts. This belief foundation thus bolstered their faith in the process and in themselves in their search for success.

It’s also interesting to see how creativity gets put to use in this context. It shows that it can be employed for purposes other than what we typically associate it with. Using it in creating works of art is certainly a lofty pursuit, but infusing it into more practical, everyday matters shows how widely it can be applied. That’s a valuable point to bear in mind when it comes to any kind of problem-solving exercises. And, the more we engage in such practices, the more adept we become at it, improving our overall conscious creation skills. Who would have thought that such creative proficiency could come out of measures not directly related to what we think of as traditional applications?

Most importantly, though, Stallworth and company effectively put the process to use creatively in seeking justice, arguably one of the most noble pursuits to which it can be employed. This calls upon us to overcome our fears, to live courageously and heroically, one of the most significant endeavors we can undertake as conscious creators. Doing so not only helps us not only surmount our own personal challenges, but it also aids our fellow beings, especially those who are persecuted or subjected to discriminatory treatment. Succeeding on this front represents a prime example of living our value fulfillment, the conscious creation principle associated with us being our best, truest selves for betterment of ourselves and the world at large. Indeed, it’s hard to imagine it being put to use for a more important, more impactful application than this. 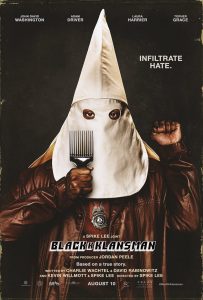 Director Spike Lee’s latest explores a variety of issues, all of which are just as relevant today as when this story was set. The film examines what it means to be true to one’s feelings, a challenge that can be made especially difficult when potentially conflicting beliefs are involved. This draws attention to the need for striking a balance, one that may not be easy to achieve and almost certainly calls for creative solutions to achieve resolution. Most importantly, though, the picture examines what it means to address the bald-faced prejudice and hate of those who would try to keep others down, making it clear where lines are to be drawn – and what simply won’t be tolerated.

“BlacKkKlansman” is easily one of the filmmaker’s best movies in years. Washington, Driver and Grace excel in their roles, bringing their characters to life with undeniable authenticity, and the period piece production values are top-notch across the board. As with most of Lee’s work, the film admittedly suffers from some occasional issues with choppy storytelling, awkward cinematography and message overkill (problems that always seem to intrude on the filmmaker’s work), yet this latest offering nevertheless serves up a deft mix of suspense, humor and social commentary in a generally well-crafted period piece. It’s good to see the director getting back into good form once again.

The film is already garnering some awards buzz, having taken home some notable trophies. Earlier this year the picture won the Grand Prize of the Jury and Prize of the Ecumenical Jury at the Cannes Film Festival. It was also nominated for the Palme d’Or, the Festival’s highest honor. Don’t be surprised if it picks up additional honors as awards season gears up.

The experiences of individuals like Ron Stallworth and his peers offer us an emboldening, inspired example for taking on those who seek to hold us down with intimidation and hate. Their tactics may frighten, but their numbers are often small, far from insurmountable. And, with an effective mix of bravery and inventiveness, these foes can be vanquished. After all, with a bright light squarely shining on them, there’s no place to hide – even under the sheets.