‘The Land of Steady Habits’ experiments with limits, change

For many of us, certainty and stability have a definite comforting appeal. We enjoy the predictability and reliability, a soothing reassurance that life will go on as we’ve known it. However, such an existence can also become a stifling trap, one that suffocates us, often without us becoming aware of it until it’s almost too late. This is where the value of change and pushing past established limits becomes desirable, if not essential, to our happiness, concepts explored in the new character study, “The Land of Steady Habits.”

Anders Hill (Ben Mendelsohn) feels lost. The recently divorced, recently retired former financial professional seeks the happiness that eluded him in his former life. But, no matter how hard this middle-aged suburbanite looks, he never seems to find it. Of course, it doesn’t help that he makes more than his share of bad decisions along the way (more on that later).

As Anders pursues a new life in earnest, he professes what appears to be a sincere desire to be a better person than he was in his old existence. For instance, he claims to have given up being a financial advisor because, in his view, the profession is built on principles of inherent greed with no moral compass, all designed to simply feather the nests of its practitioners, many of whom don’t realize or care what they may be doing to their clients. What’s more, he looks back on his old life – one not unlike that of many of his fellow Westport, Connecticut residents – as an endless exercise in mindless tedium, full of daily conscience-numbing ordeals designed to pursue illusions of happiness that never quite pan out and that do nothing to help shape or improve one’s personal character.

So, having come to these realizations, Anders decided to chuck it all. In addition to abandoning his profession, he divorced his wife, Helene (Edie Falco), an attempt to escape an empty marriage and an overstuffed house filled with materialist comforts that became more constraining than liberating. He also left behind many of his former friends, most of whom remain blindly stuck on the treadmill of their conventional conformist lifestyles, such as his onetime close companions Sophie and Mitchell Ashford (Elizabeth Marvel, Michael Gaston). In fact, about the only connection to his past that he has deliberately tried to maintain is his relationship with his son, Preston (Thomas Mann), a twenty-something college graduate recovering from substance abuse issues who’s now working dead-end jobs to stay clean and make ends meet. 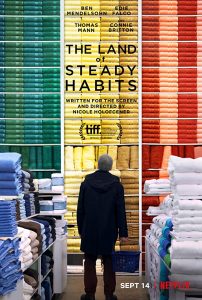 However, having purged himself of so much, Anders now has a lot of space to fill up in his life. He spends most of his time decorating his new townhouse, but, beyond that, there’s little to occupy his days. Consequently, he ends up becoming embroiled in those aforementioned bad decisions. For instance, he pursues a string of meaningless sexual encounters, most of which end up disappointing (for various reasons). But, more troubling than that, Anders has a knack for landing himself in the middle of some highly questionable situations, such as an unlikely (and some would say unhealthy and enabling) friendship with Charlie (Charlie Tahan), the Ashfords’ drug-abusing teenage son, who desperately looks for a way to escape an impending stint in rehab after an overdose incident. And then there’s his involvement with Barbara (Connie Britton), a woman whom Anders meets in a strip club men’s room after she binges on liquor, presumably to ditch the date who brought her there in the first place.

Given these situations, one might understandably question the protagonist’s judgment. But, in spite of these highly problematic circumstances, Anders genuinely seems to want to do the right thing; he just doesn’t know how. And, because of that, his handling of these incidents rarely turns out for the best. Are these matters that simply get out of hand? Or is Anders just ignorant?

What’s more, despite his contention of wanting to escape his old life, there are times when Anders seems drawn back to it, almost as if he regrets his previous decisions. But a desire to go back solves nothing, especially since the conditions of his former existence have now changed. For example, in a moment of weakness (some might say stupidity), he pays a drunken, impromptu visit to his old home in the middle of the night, a move that nearly gets the uninvited intruder’s head bashed in by Donny (Bill Camp), a former professional colleague who has now become Helene’s new live-in love interest. Indeed, it would seem there really is no going back.

So what is Anders to do? That’s what he needs to sort out, not only in terms of how to get these particular situations resolved, but also for what he wants to do with himself and his life going forward. Having courageously freed himself from the shackles of his former life, he has a clean slate at his disposal. And, with a potentially brave new future in front of him, he faces the prospect of brighter days ahead and becoming the better person he wants to be. The trick, though, is figuring out how to get there.

Starting over in life is often fraught with challenges. Breaking away from those “steady habits” can be liberating, but, when the pillars holding up our lives disappear from beneath us, we find ourselves grasping for whatever means of support we can find to keep us from going under. For many of us, we become so accustomed to our lives following set, predictable patterns that we don’t know what to do when all of the familiar, readily recognizable signposts are removed. As a consequence, we desperately search for solutions to build a new foundation.

But, as Anders’s experience illustrates, how do we proceed with that? In essence, it comes down to what we believe constitutes the basis of our existence. And it’s through those beliefs that we need to make our start, for they provide the cornerstones of what goes into manifesting our reality, the chief underlying principle of the conscious creation process. Through our thoughts, beliefs and intents, we shape the existence that materializes around us, providing us with the world we experience.

Where Anders is concerned, he’s basically starting from scratch. With virtually his entire reality wiped away, he’s creating anew from the ground up. And, since his canvas is blank, he’s free to manifest whatever he wants. But, as someone who’s used to life defined by a limited number of predictable parameters, he’s obviously having trouble envisioning – and subsequently materializing – something different, despite the open-ended creative freedom he’s now afforded himself.

With no practice at creating a life that diverges from what he has long known, Anders fumbles about trying to find his way. And, given his lack of experience at thinking outside the box, he has trouble getting things right. He doesn’t know what to manifest, because he’s not entirely sure what he believes. That muddled uncertainty is thus reflected in the chaotic outcomes he materializes.

To be sure, Anders knew enough that he needed to get out of his previous existence, a realization for which he should be heartily commended. However, with no clue what to implement as a replacement, it’s no wonder that his life is such a jumble. That, of course, requires some serious sorting out. But, again, with a lack of experience in this area, it’s a process that might not fall into place right away – at least until he figures out how to get a handle on recognizing and affirming his beliefs.

Some may look upon Anders’s actions, choices and beliefs with disapproval, disdain or even contempt. But such assessments are patently unfair. After all, how many of us get things right on the first try, especially when we lack experience in these areas? We all make “mistakes” as part of our learning curves (goodness knows I’ve made some beauties along the way). However, this is a process of trial and error, of testing out different lines of probability, helping us rid ourselves of what doesn’t work and moving us closer to what ultimately does.

This is a core life lesson that nearly all of us go through, largely because it’s a means of addressing (and, one hopes, solving) all of the subsequent life lessons that come along in various areas of our lives. Those who try to deny that they’re going through this are deluding themselves, especially when they judgmentally point fingers at others for their “missteps.” It’s a notion that calls to mind that familiar Biblical adage “Let he who is without sin cast the first stone.” None of us deserves to be subjected to such treatment – even Anders.

As noted above, Anders should be saluted for his decision to move on when he could see that his life was no longer serving him. Despite occasional pangs of wanting to retreat into the comfort of his past, he’s generally committed to forging a new existence, something that many of his peers – indeed many of us – may never muster the courage to tackle. And, even though he may not have been fully aware of the reasons why he needed to move on at the time he made his decisions, it becomes apparent as his story plays out that he had good cause to justify his beliefs and actions to make a change. This demonstrates that, on some level, he’s successfully tapped into his intuition, the essential but often-underused tool that contributes to the belief formation process. This in itself implies that he’s on the right path toward realizing a more fulfilling future through conscious creation. We should all wish him well.

Despite a slight tendency to meander at times, “The Land of Steady Habits” provides an atmospheric look at the illusory joy that necessarily comes from living a life of routine and conformity, damningly skewering many widely held misconceptions about what it takes to be and stay happy. This sometimes-humorous, sometimes-melancholic exploration features excellent performances (especially Mendelsohn) and characters who are more real than what audiences typically see on screen, something that some viewers may find distressing. But such affecting reactions are a telling tribute to the impact of the filmmaking. Indeed, director Nicole Holofcener again proves that she’s one of the most insightful auteurs in the business today, delivering yet another fine offering in her excellent repertoire.

Those interested in seeing this picture may have to do some searching to find it. As a Netflix release, the film’s current theatrical run is limited and likely to be short before the production transitions to the company’s streaming service, an approach employed in the distribution of such previous titles as “Beasts of No Nation” (2015) and “Mudbound” (2017). So, if you want to see this offering on the big screen, act fast!

Change can be a scary prospect, but it’s often one of the best and healthiest experiences we can have. It opens up new vistas and provides us with opportunities to explore aspects of life that would otherwise escape us. But, even more importantly, pushing past limitations reveals elements of ourselves that we never knew existed, giving us a shot at all manner of new adventures, a practice well worth making a habit.