How far should parents go in looking after their children? Some would say that there are no limits on this question, that mothers and fathers should be willing to do whatever it takes to attend to their kids. But is that really true? And what happens when those children are on the verge of becoming adults themselves – do the same rules apply as when they’re youngsters, especially if they become embroiled in challenges seemingly of their own making? However, no matter what happens, they’re still one’s kids, and there’s a natural tendency toward being protective that automatically kicks in. Those are among some of the tough questions addressed in the new, fact-based family drama, “Beautiful Boy.”

There’s virtually nothing that successful free-lance writer David Sheff (Steve Carell) won’t do for his kids, especially his first-born son, Nic (Timothée Chalamet). As the product of David’s first marriage to his ex-wife, Vicki (Amy Ryan), Nic has just turned 18 and is facing his future. He’s a rather creative sort and is contemplating following in his dad’s footsteps by becoming a writer. And, by all appearances, father and son have what seems to be a tight bond and healthy relationship, one that’s perhaps better than what most parents and children experience. But is that really the case?

As much as David loves Nic, he begins noticing that things may not be as good as he believes they are. Occasionally erratic behavior surfaces, including evidence of accidents and unexplained disappearances. David grows concerned that there may be problems lurking beneath the surface of a superficial veil of happiness and contentment, and he wants to do what he can to help. Nic pretends that everything is fine, but, as becomes apparent, that’s far from the truth.

David suspects that Nic may be involved with drugs. Having experimented with various substances himself in his youth and realizing that such experiences are a rite of passage for many during adolescence, he’s reluctant to come down heavily on his son for fear of being seen as a hypocrite, fully aware that such activities are part of growing up. But, when matters start getting out of hand, David realizes he needs to intervene, not only for his and Nic’s welfare, but also to protect the rest of his family, including his current wife, Karen (Maura Tierney), and their two children, Jasper (Christian Convery) and Daisy (Oakley Bull). 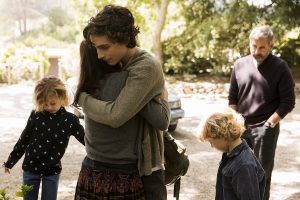 Drug-addicted teen Nic Sheff (Timothée Chalamet, center) struggles to overcome his demons, but, fortunately, he has the support of a loving family behind him, including his father David (Steve Carell, right), stepmother Karen (Maura Tierney, center, back to camera) and step-siblings Daisy (Oakley Bull, left) and Jasper (Christian Convery, second from right), in the new, fact-based family drama, “Beautiful Boy.” Photo by Francois Duhamel, courtesy of Amazon Studios.

In an attempt to nip matters in the bud, Nic enters rehab, a program that seems to bring promising results. However, as Nic’s counselor Julia (Stefanie Scott) acknowledges, success without backslides is not guaranteed, that relapse is frequently part of recovery. That’s further complicated by the fact that Nic’s drug of choice is crystal meth, a particularly difficult habit to kick given how it insidiously impacts brain function, an eye-opening discovery David makes when he meets with a medical expert (Timothy Hutton) well versed in the subject.

But David’s concerns don’t stop with understanding the mechanics of drug addiction. He wonders if there are things that he did – or didn’t do – in raising Nic that have prompted him to adopt his self-medicating ways. Did his divorce from Vicki have an impact? Was he too permissive or too controlling as a parent? Did his marriage to a new wife interfere with his relationship with his son? But, no matter how many questions David asks himself, there are no easy answers, and perhaps he needs to come to terms with the idea – painful though it may be – that the only one who is going to solve Nic’s problem is Nic.

Learning what it means to let go of something one can’t control is rarely an easy lesson, and it’s an issue that David must, unfortunately, address. Nic’s recurrent relapses and stints in and out of rehab wear heavily on the entire family, especially when it seems that the cycle of self-destruction is unending. David must learn when to be supportive and when to let his son work out challenges on his own, a difficult balance to strike for virtually any parent, no matter how old their kids may be.

At the same time, Nic needs to learn what it means to accept responsibility for his actions, even though the underlying cause may be something seemingly out of his control. He must discover what coping mechanisms are available to him and how to embrace them when the need arises, a definite challenge when the lure of drug-induced escape is always nearby and when the guilt associated with past hurts to oneself and to others hangs heavily in the air. Success in overcoming these issues is possible, but Nic must ask himself if he’s up to it.

However either of them fares in these pursuits, their success (or lack thereof) comes down to the underlying beliefs that are responsible for the manifestation of these circumstances. This is the cornerstone principle of the conscious creation process, the philosophy that maintains our thoughts, beliefs and intents serve to materialize the reality we experience. And coming to understand them is crucial to figuring out why our existence arises as it does. 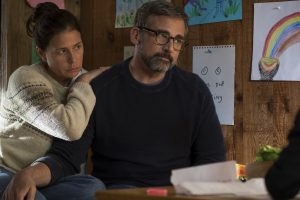 As conscious creation practitioners are well aware, our reality emerges from where we place our concentration, a principle that applies for better or worse and regardless of whether or not we’re aware of doing so. Where David and Nic are concerned, for instance, they may not be cognizant of what notions are driving their manifestations, but their beliefs are at work doing so nevertheless. Deciphering what’s going on is thus essential for coming to terms with what they experience, an especially critical concern if they wish to change what’s happening.

Such introspective analyses often require us to dig deep within our consciousness, to go below seemingly obvious considerations and examine what lies beneath the superficial. For instance, when David asks Nic why he does drugs, he answers that they make him feel better than anything else he’s ever experienced. That response may indeed be true, and it may very well provide the basis of the belief that creates his experience. But it also begs the question, why is it that he needs to do something like this to feel so good? Is there something about his reality without drugs that leaves him feeling bad or unfulfilled? If so, what is it, and what are the beliefs driving that particular manifestation? Can it be changed in a way that doesn’t call for the need to use drugs to overcome it? Indeed, can the beliefs responsible for an unsatisfactory existence be rewritten in such a way that Nic can attain happiness without having to use illicit substances to achieve it? Should he be able to do this, he might be able to find peace without the encumbrance of drugs getting in the way.

Admittedly, such deep personal analyses may not be easy, both for those who engage in them and those on the sidelines who are looking on. For the answers to come, Nic will have to do the work, and he’ll have to do most of it on his own. As for David, the difficulty might be just as great, given that he can’t really do much more than offer his support and watch. To be sure, that encouragement to succeed is vital, but the harder tasks ultimately fall to the one having to make the discoveries about – and alterations to – the beliefs responsible for manifesting the existence at hand. Still, being a helpless witness can’t be easy, either.

For both father and son, an experience such as this is undoubtedly an important life lesson, one that’s just as driven by beliefs as everything else involved in this scenario. At the heart of both of their life lesson experiences is a matter of faith. For Nic, it’s faith in himself that he can conquer his demons and turn his life around. And, for David, it’s faith in his son that he can succeed at this task without him becoming directly involved in the process. In each case, the faith that they employ is, in itself, a form of belief, and the degree to which they embrace and adhere to it will determine how circumstances eventually play out.

Those who are convinced of the strength and validity of their faith, and of the beliefs that constitute it, are likely to see their convictions materialize. However, should their commitment to these notions be undercut by such influences as fear or doubt, they’re more likely to see disappointing or incomplete results. This is true not only in situations like those faced by David and Nic, but also in any conscious creation undertaking that any of us might attempt. In that sense, then, the experience of the elder and younger Sheffs provides an example – and a cautionary tale – to all of us in any of our manifestation pursuits, regardless of whether or not drugs are involved. However, if someone is able to overcome circumstances as challenging as these, then what excuse is there for any of us who claim we’re unable to surmount ventures of a less volatile, less intense nature? The lesson in this for us as viewers is just as important in any of the endeavors we attempt as those depicted herein on the screen.

Of course, much of the success we attain – no matter what we undertake – stems from the power of love, both that which we give to ourselves and that which comes from others. And, to be sure, it’s hard to discount the love that comes from a parent. There are indeed situations where parents could do more to show the necessary love that their children require, but, in many cases, it’s undeniable and should be cherished for what it’s worth. After all, without it, many of us would surely stumble and fall more often than we do—and under less trying circumstances than those depicted here. 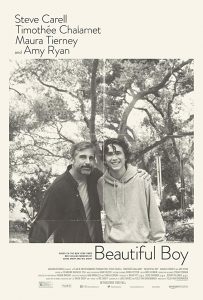 Based on the books Beautiful Boy by David Sheff and Tweak by Nic Sheff, director Felix Van Groeningen’s latest offering provides an up-close look at the perils of drug addiction and the pain of parents learning to let go of their adult children. While the film is somewhat formulaic with a penchant for repetitiveness, this searing drama nevertheless makes its points abundantly clear and offers helpful suggestions about what the afflicted and their familiars can do under such conditions. What shines the most here, though, are the heartfelt performance of Carell and the riveting, revelatory turn by Chalamet, a portrayal far better than his previous (and much overrated) work. “Beautiful Boy” doesn’t break especially new ground cinematically or in its narrative, but it conveys its heartfelt message quite capably and effectively addresses an epidemic problem sorely in need of being brought under control.

The choices we face in life aren’t always easy. Sometimes we have to free ourselves of burdens that are more than we can bear. And, at other times, we have to take them on, particularly when they involve lessons of personal responsibility. However, such challenges are always easier to handle when we know that we have backing for what we undertake, even if it’s only in the form of moral support and encouragement, for the effects of such assistance will make their way through to those in need of it.

Now how beautiful is that?