‘Border’ helps us discover what separates and divides us

Coming to terms with who we are is sometimes a difficult process. If we’re significantly unlike those around us, we may feel uncomfortable about our differences and seek to fit in as best we can, hoping that our distinctions are downplayed or go unnoticed. But how long can we keep a lid on a pot like that, especially when the contents begin to boil? In fact, should we even try to do so? Maybe that’s a sign to accept ourselves for who we are and live the life we were meant to live, a challenge brought to the fore in the unusual new Swedish offering, “Border” (“Gräns”).

If you’re ever looking to catch someone trying to illegally smuggle something into your country, call on Tina (Eva Melander). The Swedish customs inspector has a nose for sniffing out anything the least bit illegal – literally. Through her keen sense of smell, she can spot anybody bringing in contraband, from illegal stashes of liquor to items of a more dubious nature. And she’s right every time.

So how does this unconventional sleuth do it? She says she can “smell” the guilt, shame and regret on the people who pass by her inspection station. It’s admittedly an unusual talent, but then there are many things about Tina that are far from normal. Her rather homely looks, coupled with her soft-spoken, person-of-few-words demeanor, set her apart from virtually everyone around her.

Outside of work, Tina’s life is mundane personified. She lives in a small house in the woods with her somewhat emotionally distant partner, Roland (Jörgen Thorsson), a show dog trainer who spends most of his time watching TV when not attending to the canines. She also dutifully pays regular visits to her aging father (Sten Ljunggren), who has been confined to an assisted living facility for patients suffering from memory issues. But otherwise she leads a fairly boring existence, her only real diversion being taking long barefoot walks through the surrounding forest, where she seems to have a remarkable affinity for communicating with the woodlands animals.

However, before long, the tedium abates when Tina’s life takes several unexpected turns. During one of her passenger interrogations, she identifies a culprit trying to smuggle in a computer disk containing images of child pornography. Officials are so impressed with her remarkable abilities to spot the target and locate the carefully concealed evidence that they ask her to join their investigation to find others involved in this heinous crime ring.

But, if that development weren’t dramatic enough, Tina experiences something even more unusual when she encounters Vore (Eero Milonoff), a passenger who bears an uncannily striking resemblance to her. She believes that he, too, is hiding some kind of secret, even though he makes no obvious attempt at concealing anything; in fact, his strangely friendly attitude almost seems to invite scrutiny. A thorough search of Vore’s belongings turns up nothing, suggesting that Tina may be wrong, perhaps for the first time in her career. However, convinced that something is still amiss, Tina asks a male co-worker to conduct a strip search of the passenger. This investigation indeed confirms Tina’s suspicions that Vore is not what he appears to be, though the revelation involves nothing of a criminal nature. The mysterious traveler, it seems, is a hermaphrodite. 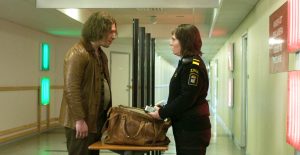 Embarrassed and ashamed at her uncalled-for persistence, Tina sheepishly informs Vore that he/she can file a formal complaint about her conduct. Much to her surprise, however, Vore tells her not to worry, that he won’t press any charges. In fact, as the two converse further, they get to know one another personally, a dialogue that opens up an unusual bond between them with implications that extend beyond the customs office. In no time, they begin spending considerable time together, and Vore even rents the guest house on Tina’s property.

As Tina and Vore get to know one another, it’s obvious that these individuals are even more unusual than what was initially apparent. What’s more, they develop a relationship that’s anything but conventional. To say more would reveal too much about the plot, but suffice it to say that they’re off on an adventure together that’s full of wonder, strangeness and self-discovery. It’s one that also ties in many additional elements, including that aforementioned police investigation, Tina’s father and Roland’s distance, something that’s not entirely of his own doing.

Surprisingly, this strange little film has a lot to say on a lot of topics, most notably what it means to be oneself and comfortable in one’s own skin. The quest for self-acceptance is something we all strive for at some point in our lives, and it’s an odyssey that can be made all the more challenging when we possess traits that set us apart from the bulk of society. It’s a struggle that Tina wrestles with here, as she seeks to come to terms with who she is, perhaps for the first time in her life. It’s not easy, but it is rewarding, and it certainly helps to have someone like Vore along for the journey to help show her the ropes, no matter how unconventional they might be.

Success in this area, however, depends greatly on our individual efforts, and those initiatives, in turn, are driven largely by our beliefs, the building blocks of the conscious creation process, the means by which we manifest our existence through the power of our thoughts and intents. As the film opens, this is an area in which Tina is generally inexperienced. She doesn’t give much attention to who she is, despite her differences from those around her. Instead, she puts most of her efforts into figuring out ways to fit in, downplaying what separates her from others. And, given her father’s failing memory, she asks him few questions about her past, because she doubts that she’ll be able to reliably trust whatever answers he gives her. Consequently, she goes about her business, conducting her life according to what she’s been able to figure out about herself and not trying to develop a greater sense of self-awareness.

But that all changes with Vore’s arrival. Tina starts taking a more introspective look at who she is and what she believes about herself, actions that, in turn, impact the reality she experiences. She discovers things about herself that she never knew and probably never expected, despite her general realization that she’s not like her peers. She finds the experience quite revealing and eminently liberating. Indeed, to know ourselves is perhaps one of the greatest consciously created gifts we can give ourselves. It strips away the fog induced by our own ignorance, of the practice of un-conscious creation or creation by default. It enables us to define our character and, subsequently, to shape our reality as we move forward.

From this, one might understandably wonder why it has taken Tina so long to come to these conclusions, but there are actually several reasons behind this. For instance, some revelations may prove to be so profound, so potentially jarring, that we need to wait until the time is right for us to be ready to address them. In Tina’s case, that means awaiting a time when she’s ready and able to draw someone into her life who can help guide her in the discovery process. This involves growing comfortable with such a notion, even if it takes place on a subconscious basis, to make such an outcome possible. It also means eliminating beliefs rooted in fear and doubt, as these influences can effectively undercut, rule out, contradict or distort successful creations. And, if our existence is meant to include some sort of specific destiny, we must also wait things out until the circumstances are in place to enable its eventual fulfillment.

On some level, then, by the time of Vore’s arrival and Tina’s involvement in the police investigation, the pieces of her puzzle have at last come together to make her new reality possible. She formulates and implements the beliefs necessary to bring these situations into being and manifest an existence in which these particular conditions are present, all of which ultimately are aimed at learning her identity and fulfilling her mission in life. That’s quite an accomplishment, one not to be taken lightly. It’s also an example anyone can draw from, especially for those who feel lost, adrift or separated from their own existence and those with whom they share it.

“Border” is one of the best efforts at fusing multiple cinematic genres that I’ve ever seen. It’s part crime drama, part fantasy, part horror flick, part offbeat love story and part noir thriller with a dose of Norse mythology all rolled into one sumptuously filmed, deliciously unusual offering. This one will take you places you don’t expect at seemingly every turn, holding your interest intently, because you’re never sure where it’s going to go next. Director Ali Abbasi serves up a sometimes-funny, sometimes-twisted, sometimes-sweet tale that leaves viewers guessing right up to the closing credits. The changes in mood definitely keep you on your toes, but it’s well worth it in the end. The film won the Un Certain Regard award at this year’s Cannes Film Festival, and it’s Sweden’s official entry for best foreign language film at the upcoming Oscars. 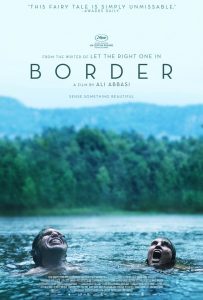 No matter how much we may try to deny ourselves – either willfully or out of ignorance – at some point our true beings will surface. The transition may be difficult, and finding our footing may be challenging. But ultimately there’s no substitute for authenticity and our acceptance of it, especially when it comes to ourselves. Just ask Tina.