Getting at the truth isn’t always easy. It may be obscured by camouflage, and accessing it may be difficult because of roadblocks or obstacles. And yet, once that elusive truth is found, it could potentially be so painful that one might wish it had stayed concealed. However, for those who are committed to seeing it being told, it takes certain skills, most notably in the areas of tact, compassion and forthrightness, to convey the information, especially to those most in need of hearing it. These are qualities essential to the missions of a courageous mother and son as seen in the gripping new drama, “Viper Club.”

Helen Sterling (Susan Sarandon) leads a hectic enough life as an emergency room nurse that she certainly doesn’t need any more drama than is already in it. But that wish, unfortunately, goes ignored when she learns that her son, Andrew (Julian Morris), a free-lance journalist covering the crisis in Syria, goes missing and is presumed kidnapped by terrorists, a reality confirmed when she receives a ransom demand for $20 million. A parent’s worst nightmare comes true, and she feels utterly helpless to do anything. 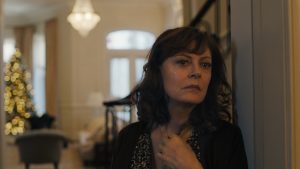 Emergency room nurse Helen Sterling (Susan Sarandon) faces a crisis even greater than what she encounters at work when she learns that her son, a Syrian war correspondent, has been kidnapped and held for ransom in the gripping new drama, “Viper Club.” Photo by Walter Thomsen, courtesy of YouTube Premium and Roadside Attractions.

Helen initially contacts government authorities, first through an FBI agent (Patrick Breen) and then a State Department official (Damian Young), for help. In true bureaucratic form, however, progress in securing Andrew’s release is excruciatingly slow, with endless red tape and incessant protocols. What’s worse, though, is that Helen is kept in the dark about what’s transpiring behind the scenes. And, on top of that, officials insist that she tell no one about her circumstances, leaving her to suffer in silence and solitude. Her hands are tied at every turn.

As Helen’s frustration grows, so, too, does her desire to take matters into her own hands, despite warnings from officials that her actions could jeopardize Andrew’s life. They also caution her that any attempt on her part to pay the ransom could land her (and anyone who assists her) in jail, given that such actions violate federal law. But, considering the persistent, protracted run-around that she’s been getting, Helen’s patience is running out.

With the encouragement of Andrew’s former girlfriend, Sheila (Sheila Vand), Helen is urged to make contact with her son’s unofficial support network, the Viper Club. This loosely organized but tightly knit group of peers and their backers aids free-lance war correspondents having no media organization affiliations with all kinds of assistance, from finances to security to hostage extraction. The network keeps a low profile but frequently manages to attain success, despite the organization’s clandestine and legally questionable nature. 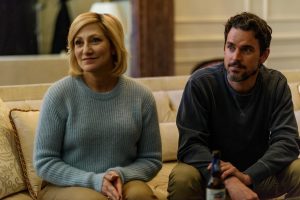 As members of the Viper Club support network for free-lance war correspondents, fund-raiser Charlotte (Edie Falco, left) and negotiator/go-between Sam (Matt Bomer, right) aid their peers and their families when faced with crises in their work, as seen in the intense new drama, “Viper Club.” Photo by Walter Thomsen, courtesy of YouTube Premium and Roadside Attractions.

Unsure where else to turn, Helen meets with one of the club’s principal state-side contacts, Charlotte (Edie Falco), a well-to-do, well-connected networker who knows what Helen is going through, her son having been a former but successfully released hostage. In their initial meeting, Helen expresses concern about the ransom amount. She’s willing to hand over everything she has, but her resources come nowhere close to what’s being demanded. Charlotte reassures her, however, that, as one of the network’s chief fund-raisers, she’ll be able to quietly find the money. Thus, with the aid of other network members, such as Sam (Matt Bomer), a former journalist-turned-negotiator and go-between, the covert quest to secure Andrew’s release begins.

However, despite the encouraging progress made by the network, Helen is still left to wait for news largely on her own, reluctantly agreeing to adhere to the government’s admonition not to reveal her situation to anyone (or, at least, anyone else, that is). This leaves her with much time to think about her circumstances, particularly her relationship with Andrew. Through a series of flashbacks to when he was a child (Jack McCarthy), she reflects on the maturation of a boy who seemed the least likely candidate to grow up and become a war correspondent. She wonders what possessed him to pursue such a course, given that it seemed so completely out of character. Such pondering gives her great pause, especially in light of the conditions under which she now finds herself.

To find her answers, though, Helen need look no further than herself and her vocation. The kind of boundless compassion she brings to her work – both through her concerted patient care efforts and her tactful but frank honesty with patients’ loved ones – is the same quality that Andrew brings to his calling, a trait plainly apparent in his frontline reporting. Like mother, like son, they both care deeply about what they do and the people they’re trying to help. They want the truth to be known. And they hope that their efforts will not be in vain. 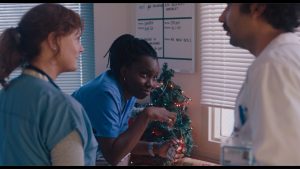 This process of discovery is challenging but revelatory for Helen. She comes to see her son – and herself – for who each of them really is. She discovers what it truly means to be a hero despite the tremendous risks and the ever-present danger of potential disaster, be it on the life and death battlefront of war or on the life and death battlefront of a trauma center. This is something that becomes readily apparent both through Andrew’s war zone videos and through the care Helen provides to a comatose young shooting victim (Mattea Conforti) and her concerned mother (Lola Kirke). The venues may be different, but the challenges are much the same.

Some might wonder why anyone would put himself or herself in the line of fire as Andrew and Helen do. These unsung heroes may even wonder the same themselves. But, when someone feels a seemingly inexplicable calling to do something, there’s no stopping it from materializing. On some level, mother and son feel compelled to become involved. And, consequently, they each draw upon the power of conscious creation – the philosophy that maintains we manifest the reality we experience through the power of our thoughts, beliefs and intents – to provide the means to make their participation possible.

To be sure, Helen and Andrew have chosen particularly difficult paths in the pursuit of their individual destinies. But, at the same time, if this is what it takes for them to satisfy their value fulfillment – the drive to be their best, truest selves for the betterment of themselves and others – then they’ll feel compelled to pursue such aims until their goals have been reached. In the quest to share compassion and to make the truth known, Helen and Andrew won’t be silenced or stifled; they’ll keep at their respective undertakings until their respective objectives have been fulfilled. 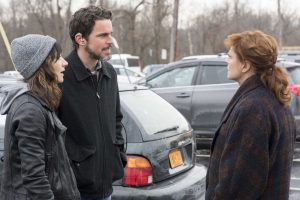 In chasing down such pursuits, we must be prepared to break through limitations that could deter us, including those associated with our beliefs, the building blocks behind the conscious creation process. This is especially true when it comes to fear-based beliefs that might hold us back; if we allow them to get in the way, we’ll never arrive at our destinations, an outcome that would likely be a major disappointment both for ourselves and those we were meant to assist. Think of what would happen to the trauma center patients if it weren’t for Helen’s compassion and care. What’s more – and potentially worse – consider what would happen to those battlefront victims whose stories would never be told to a world willing to provide help but that would not be able to do so purely out of sheer ignorance of the problem. That’s where the manifestation efforts of those like Helen and Andrew become so vital; if they weren’t willing to step up and do the work that they do, there could potentially be a lot more suffering in the world than there already is.

The world clearly needs more people like Helen and Andrew, and “Viper Club” makes that point abundantly clear. The film, unfortunately, has been unduly and unfairly criticized on a number of fronts, most of which, in my view, are born from decidedly cynical and superficial outlooks. This gut-wrenching, heart-tugging drama ripped from the pages of contemporary headlines tells a story that needs to be told, an objective that parallels the very mission of the characters on screen, one whose pitfalls are revealed all too candidly. Sarandon turns in one of the best performances of her career in this film, one that’s truly worthy of awards consideration but that, regrettably, is likely to be overlooked come nomination time. While the film is, admittedly, a bit slow in spots and deviates from the main narrative perhaps a little more than it should, this thoughtfully written release nevertheless offers more than just the basics of what one might expect from it, especially when it comes to the emotional punch it packs. Because of that, better keep those hankies handy, just in case. 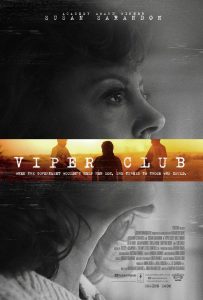 It’s been suggested that the truth, coupled with a hefty balm of compassion, is essential to healing the wounds that many of us suffer, especially those of an emotional nature. Thankfully there are people out there like Helen and Andrew who provide such valuable assistance. But what of them – who cares for their needs? Surely the caregivers need nurturing of their own at some point, particularly when their circumstances become especially trying. That’s when the rest of us need to step up and follow their leads, to provide the kind of support to them that they so freely give to everyone else. If there’s nothing else we take away from this film, we should at least recognize and, when needed, emulate the example set by these courageous and compassionate souls, to give to them what they so freely give to us. If more of us would do that, we just might make this planet a better place after all.