Getting at the truth under trying circumstances can be challenging, to say the least. But imagine what that undertaking might be like with the added dangers of bullets whizzing overhead and unseen land mines potentially lurking in the path of our every step. Such a pursuit takes someone genuinely committed and eminently earnest about arduous tasks like these, the kind of individual profiled in the gripping new biopic, “A Private War.”

London Times war correspondent Marie Colvin (Rosamund Pike) was never one to back off from a challenge. In years of covering conflicts in the world’s hotspots, she frequently took risks to get the story, even if it meant placing her own personal safety in jeopardy. Through her forays into Sri Lanka, Iraq, Afghanistan, Libya and Syria, she often followed her own path to the truth, even when it meant costing her most of the use of one eye. But her work was truly astounding, earning her major professional accolades for her reporting. 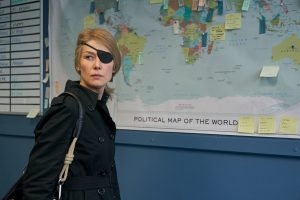 London Times war correspondent Marie Colvin (Rosamund Pike) scans the map to learn about her next assignment in the gripping biopic, “A Private War.” Photo by Paul Conroy, courtesy of Aviron Pictures.

With the aid of photographer Paul Conroy (Jamie Dornan), Colvin made a particular effort to address the “human” side of inflamed conflicts. Headlines were one thing, but letting the world know about the high personal cost of war thrust upon those unwittingly caught in the crossfire was equally, if not more, important. She endeavored to reveal the suffering inflicted upon the innocents – the wives, mothers and children – who just happened to be in the wrong place at the wrong time. This was particularly true during her reporting from Syria, where she made front page news and informed the world of the horrific carnage occurring around her.

Such devotion, however, took its toll on Marie herself. Her personal life was virtually nonexistent – no family and only scant romantic involvements with men who were unfaithful (Greg Wise) or for whom she never seemed to find enough time (Stanley Tucci). Her few friends (Nikki Amuka-Bird, Amanda Drew) worried dearly about her. And even her editor, Sean Ryan (Tom Hollander), who stalwartly supported her efforts, had doubts at times about her judgment when it came to the approaches she took to her assignments. These concerns became particularly troubling through Marie’s steadily increasing drinking, placing her on the precipice of becoming an alcoholic, and a bout of PTSD that she suffered after her stint in Iraq and that landed her in a special treatment facility.

Still, despite these pitfalls, Colvin would not back off. Over time she came to recognize that she was personally torn about her calling. She abhorred the misery and strife of war zones, yet she also couldn’t keep herself away from them. As long as there were those who were suffering, she felt compelled to bring their stories to light for the world to see. This became, as the film’s title suggests, her own “private war,” one that was chronicled in a Vanity Fair magazine article that inspired this picture.

Colvin’s experience exposes the turmoil that can occur when we maintain beliefs that are in conflict with one another, one of the pitfalls that can arise with the conscious creation process, the philosophy that maintains we employ our thoughts, beliefs and intents to manifest our existence. Try as we might to identify, clarify and implement these metaphysical building blocks as effectively and efficiently as possible, even those of us who are practiced in this process may suffer the ill effects of giving rein to contradictory notions.

In some cases, this may result from a lack of awareness of a belief conflict. In others, we may recognize the quandary but are unable to resolve it, either because we can’t envision workable solutions or can’t see past seemingly insurmountable limitations. And, in still others, strange as it might sound, such belief opposition may actually satisfy some kind of need, goal or desire, one whose underlying nature may take some digging to identify, understand and reconcile.

Given Colvin’s drive to tell the stories of those unable to speak for themselves, it’s understandable how she would feel compelled to keep at her work, regardless of the inherent dangers and drawbacks associated with it. As repulsed as she was by the wartime atrocities going on around her, and as readily as she came to recognize this fact, she still couldn’t drag herself away from these difficult circumstances, continually forging ahead to fulfill her mission. 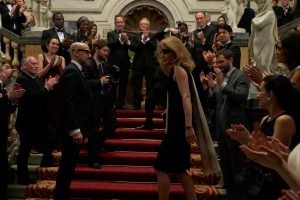 That kind of dedication doesn’t happen without focused, determined beliefs underlying it. That, consequently, also illustrates the intrinsic power of our beliefs. If they can keep us plugging away at undertakings that we find questionable or rash, there’s something to be said for what they can impel into being. That can be tremendously moving, informative and persuasive, even under trying conditions. It also reveals the tremendous compassion underpinning such efforts, something we could use more of, especially in an age of an increasingly cynical and self-serving media establishment.

But the power of our beliefs need not be limited to situations where we feel obligated, if not burdened, to expose a nasty truth or to shake a sleeping public out of its complacency. Imagine what the power of our intentions might help us accomplish if it were to be employed for beneficial and beautiful endeavors, especially those we truly enjoy. This is where the magnificence of our beliefs, and the conscious creation process through which they’re employed, can really shine.

No matter how those beliefs are used, though, when they’re employed in ways where they help to bring about the betterment of ourselves and of our fellow man, they activate the conscious creation concept of value fulfillment. This could include anything from creating great works of art to providing care to the needy to writing about the truth of the horrors of war. In her own way, Marie Colvin understood this and made it her value fulfillment mission, despite the tremendously high personal cost that came with it. 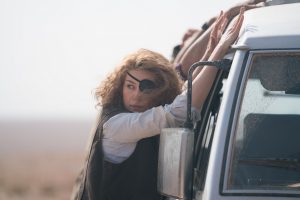 Ever challenged for her credentials when present in war zones, London Times correspondent Marie Colvin (Rosamund Pike) faces incessant uncertainty when seeking to get the story in “A Private War.” Photo by Keith Bernstein, courtesy of Aviron Pictures.

Those who have never worked as journalists may find such compulsive attitudes difficult to fathom. However, having once worked in the field myself (though admittedly not on a scale anywhere near that of the protagonist), I understand what it means to feel drawn to uncovering the truth of a story and to make it known to an awaiting audience. When the stakes are especially high, as they were in the conflicts Colvin covered, the need to fulfill that mission becomes particularly strong, no matter what it takes to get it done. Were it not for intrepid reporters like her, stories like this might not otherwise see the light of day.

Although at times a little weak on back story, this otherwise-gripping biopic about the protagonist’s dogged determination to get the story sizzles with bold intensity, especially in its uncompromising depictions of the horrors she witnessed firsthand and in the personal toll such events took on her physically and emotionally. Pike’s stellar performance is certainly award-worthy, showing the many sides of a complex character who frequently straddled the line between bravery and recklessness. Be forewarned, however, that the graphic nature of this offering makes it a questionable choice for sensitive and squeamish viewers. But, for those who like their heroic tales larger than life and rooted in truth, this one is definitely for you. 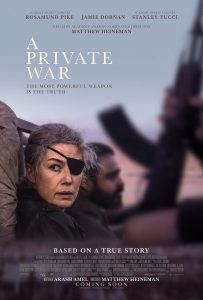 Like another recent release about the lives of war correspondents, “Viper Club”, this film poignantly reveals the sacrifices these individuals are willing to endure and the risks they’re willing to take in making sure the truth is known. Some might see them as brave, gallant souls, while others may view them as foolhardy and careless. The belief conflicts that they wrestle with alone are a substantial burden to take on. Nevertheless, no matter how these individuals are viewed, what they accomplish in the end is what’s most important, efforts for which they deserve every recognition possible. Were it not for this kind of determination, as well as the compassion that goes along with it, we might all be kept in a darkness that would ultimately be even more frightening than any war we might live through.