‘Isn’t It Romantic’ muses about the true nature of love

What does it take to love someone? The answer may surprise you, as its origins actually stem from a source that might not be recognized at first glance. But making that realization is crucial if we ever hope to find that true love, an insight pursued in earnest in the delightful new romantic comedy parody, “Isn’t It Romantic.”

When pudgy 12-year-old Aussie Natalie (Alexandra Kis) gawks at a screening of the 1990 romantic fantasy “Pretty Woman,” she longs for the same kind of happily-ever-after ending for herself experienced by lead characters Richard Gere and Julia Roberts. But that wide-eyed wonder is summarily quashed by the hard-edged cynicism of her mother (Jennifer Saunders), who tells her daughter that such outcomes are unrealistic for common folk like them. Needless to say, Natalie is crushed, but she nevertheless takes the “advice” as gospel.

Fast forward to the present day, when a twenty-something Natalie (Rebel Wilson) is now an architect living in New York. However, despite the seeming prestige such a position should offer, she’s often put upon by co-workers (Zach Cherry, Sandy Honig) who ask her to perform menial tasks for them or even do their jobs. Even her personal assistant, Whitney (Betty Gilpin), is of little help, ignoring her responsibilities and spending her days endlessly watching romantic comedies on her computer. About the only person in her corner is her co-worker Josh (Adam Devine), who actively seeks to court her friendship and build up her morale. But even that encouragement does little to bolster her spirits when she’s treated shabbily during a project presentation by one of the firm’s clients, Blake (Liam Hemsworth), a terminally handsome but arrogant businessman who thoughtlessly assumes she’s the coffee girl and not the professional that she is.

Such treatment only reinforces the general malaise she feels about her life. With little respect at her office, no looming romantic prospects and even a pet dog that ignores her, Natalie feels like life is passing her by, but she accepts and expects that, an attitude that echoes the sentiments planted in her mind by her mother all those years ago. She even chastises Whitney for wasting so much time watching her silly movies, claiming that those pictures, like the film she gawked at as a youngster, paint an implausible picture of romance. Natalie recites a litany of clichés that characterize the pictures of that genre and itemizes how their narratives fill the heads of their viewers with naïve, unrealistic notions about love. 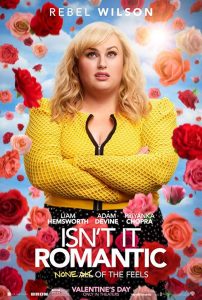 After yet another unfulfilling day at work, while riding home on the New York City subway, Natalie gets hit on by a flirty stranger (Dean Neistat). Unfortunately, the would-be suitor turns out to be a mugger. But, despite an attempt at snatching Natalie’s purse, the attacker is unprepared for his victim’s ability to fight back, an effort at which she nearly succeeds – were it not for running into a support beam and knocking herself unconscious.

When Natalie awakens, she finds herself in an emergency room unlike anything she’s ever seen. The designer hospital suite looks more like something from an interior decorator’s studio than a health care facility. The attending physician is a hunk, and flowers adorn everything. And, upon release, Natalie discovers an outdoor streetscape that resembles the set of a Hallmark movie.

Natalie naturally wonders how New York ended up looking like this. Gone are the grubbiness and the foul smells to which she’s grown accustomed. And everywhere she looks she sees couples madly in love. Given that everything she’s witnessing goes against her views about reality, she’s convinced she’s got to find a way to escape and get back to the existence that she knows and … loves?

Yet, as she makes her way through this alternate existence, she finds virtually everything is now working to her benefit. Her apartment has been transformed into something out of Architectural Digest. Her dog adores her. And Blake, the client who previously treated her like dirt, is now head over heels in love with her.

But is this allegedly perfect reality everything it’s cracked up to be? Whitney, for example, has suddenly been transformed from a warm and supportive colleague into a wicked witch. Josh, though still in Natalie’s corner, has taken a shine to a super model, Isabella (Priyanka Chopra). Blake, despite his claims of undying love, reveals that his affection comes with strings. So, given all that, is this really where Natalie wants to stay? And, if not, how does she escape?

The answer is not out of reach, but Natalie will need to discover where to look, and that may prove challenging. However, if she really wants to make a change – one that ultimately involves more than just a return to the reality she knows – she’ll have to take on that challenge. And the answer to that may surprise her – and us.

The quest to find the meaning of true love can take many twists and turns. And, since most of us are born without a guidebook, that can turn the search into an exercise in trial and error. We may look at the examples set by others. We may attempt winging it on our own. Or we may look to others for advice, as Natalie does in consulting her best friend and next-door neighbor, Donny (Brandon Scott Jones), the sort of unattached, flamboyant but infinitely wise gay man who often makes for a staple rom-com character. But, in the end, given that we have engaged in this search, perhaps we should consider starting with ourselves to see what we bring to the table of romance. Once we do that, we may find our quest much easier to fulfill.

Of course, much depends on our beliefs about love, as they determine what unfolds in our life, thanks to the conscious creation process, the philosophy that maintains we manifest the reality we experience through the power of these metaphysical building blocks. And, given Natalie’s life, it’s apparent she holds some clearly defined beliefs about love, all of which characterize the nature of her romantic experience.

In Natalie’s case, we can go back to an early point in her life to see where these beliefs took shape, and clearly she’s conflicted. While watching “Pretty Woman,” for example, she willingly bought into the fairy tale aspect of love. But, in turn, she also embraced the sour outlook of her mother, a polar opposite attitude. This set of divergent beliefs has combined to create the antagonistic views she maintains. And, as conscious creators well know, contradictions like this are one of the chief causes of our hoped-for manifestations remaining unmaterialized.

Unfortunately, this attitude has permeated other aspects of her life as well. Disappointment and low expectations have creeped into other areas, affecting her overall outlook. She obviously doesn’t expect much romantically speaking, but that attitude has also left her with comparable views about her career, her living circumstances and even her relationship with her pet.

So, if she ever hopes to turn things around, what is Natalie to do? She needs to look to herself and what she hopes for out of life. If she continues to maintain such a dismal approach to her existence, it’s easy to see what she’ll get in return. But, if she were to believe that she deserves better, then perhaps she might realize a different outcome. And that is what triggers her alternate reality experience. It affords her an opportunity to see what else is possible, to get a glimpse of what alternatives she can experience besides what she’s typically known.

However, to make this happen, Natalie has to be the one to do the work, specifically where her manifesting beliefs are concerned. A different result won’t arise from the outside; it must begin from within. Natalie must change her views, particularly when it comes to her expectations, and that largely has its origins in such areas as self-esteem and self-love.

This is obvious to outsiders like Whitney and, especially, Josh. They try to encourage Natalie to see the worth she possesses and to demand more for herself, especially when it comes to her dealings with others, such as possible romantic partners, co-workers and even her dog. Interestingly, this is something from which many of us could probably benefit, but, for what it’s worth, many of us are like Natalie in that we don’t see it in ourselves. If there’s any takeaway we should glean from this film, that would be it. Should we do that, we might all be a lot happier in our lives, not just romantically but in all aspects of our existence.

“Isn’t It Romantic” explores what true love really means and where it originates. While at times a bit belaboring and at other times somewhat underdeveloped, the film is a generally charming rom-com parody reminiscent of the fun-filled independent production “(500) Days of Summer” (2009), albeit somewhat more commercial. The picture delivers lots of laughs and nice sentiments about matters that go beyond romance. Rebel Wilson shows that she can carry a lead role effectively, serving up the goods at every turn. And the film’s skewering of romantic comedy clichés, such as the inclusion of several impromptu, perfectly choreographed, over-the-top music video sequences, is an absolute hoot.

For something that we place so much attention on, you’d think that we’d all be experts by now when it comes to this thing called love. If only that were true. But that’s not to say we can’t master it with the right attitude, the right outlook and a willingness to put in the work to figure it out. After all, for those of us who’ve succeeded at this, we can honestly say that the effort is well worth it. And that truly is romantic.