Skip to content
Home/Conscious Creation, Drama, Movie Reviews/‘Birds of Passage’ cautions us to consider what we create

‘Birds of Passage’ cautions us to consider what we create

We all love it when we come up with what we think of as a great idea. We envision possibilities for success that meet, if not exceed, our expectations. But how often do we think through such notions thoroughly? Failing to do so can carry significant implications, some that may even threaten the existence we know and enjoy. Such is the case for a tribe of native people flirting with the ways of the modern world in the captivating new Colombian release, “Birds of Passage” (“Pájaros de verano”).

It’s amazing how quickly life can change. For the Wayúu people of Colombia’s northern Guajira Peninsula, their long-established way of life did just that in the late 1960s – and not for the better. That story is the stuff of which this fact-based film is made.

In 1968, when the young and lovely Zaida (Natalia Reyes) emerges from a year of confinement during which she transforms from an adolescent into a woman, the community celebrates her arrival into adulthood – and her availability to take a mate. Would-be suitors vie for her hand, but the potential beau most anxious to wed her is the handsome young Rapayet (a.k.a Rafa) (José Acosta). However, despite his desire and determination to woo Zaida, Rafa has something of a reputation weighing him down. If he’s to win her hand, he’ll have to prove himself especially worthy, and he’ll need all the help he can muster. 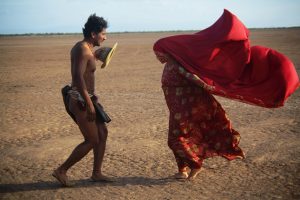 Fortunately, Rafa has the strong support of his uncle, Peregrino (José Vicente Cotes), who eagerly talks up his nephew’s many accomplishments in making up for the past and in becoming a successful businessman, particularly in his dealings with the alijunas (outsiders not to be readily trusted). But, even with such backing, Rafa faces an uphill battle in convincing Zaida’s mother, Úrsula (Carmiña Martínez), the tribe’s formidable matriarch, to grant him what he seeks.

After lengthy discussions, Úrsula reluctantly agrees to give her daughter’s hand to Rafa if his family can come up with a sizable dowry, one that’s unusually large compared to most typical arrangements. Rafa agrees to the terms, despite Peregrino’s doubts about his nephew’s ability to fulfill the request. What’s more, even after Rafa pledges his word to his future mother-in-law, Úrsula reiterates her reservations; as one who possesses the gift of prophecy and is well-versed in her people’s ancient spiritual ways, she senses Rafa will bring trouble to her family, despite his reassurances that he’ll provide well for Zaida and her clan while honoring the tribe’s customs.

With the arrangements set, Rafa goes about raising the funds he’ll need to pay for the dowry. He deals in various crops, such as coffee beans, with his alijuna friend, Moisés (a.k.a. Moncho) (Jhon Narváez), but the money these transactions generate is far from sufficient to meet his obligations. Things change, however, when the duo meets Peace Corps volunteers (Sebastián Celis, Alice Lebadie) looking for what brought them to Colombia in the first place – marijuana. And, when Rafa and Moncho learn how much the Americans are willing to pay for it, they realize they have a lucrative new business opportunity staring them in the face, one that will cover the cost of the dowry and then some. 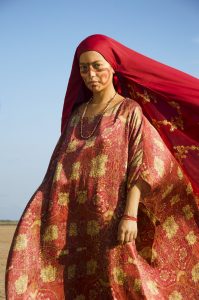 Having emerged from a year of confinement in which she transformed from an adolescent into a woman, Zaida (Natalia Reyes) entertains the proposals of would-be suitors in “Birds of Passage” (“Pájaros de verano”). Photo by Nic Izzi, courtesy of The Orchard.

To fulfill their pending order with the gringos, Rafa visits his cousin Aníbal (Juan Bautista Martínez) at his mountain plantation. Aníbal grows marijuana but not in large amounts. Rafa tells his cousin that his customers are willing to pay a hefty price for his crop, one that could turn a tidy profit for both of them and likely lead to an ongoing source of new business. He proposes buying Aníbal’s entire stock to get the ball rolling, a venture that promises to be worthwhile for all concerned. Rafa thus earns the cash to more than cover the dowry; party boy Moncho gets the funds to live larger than he ever dreamed; Aníbal raises the money needed to expand his production; and the gringos get the best pot they’ve ever smoked, and they like it so much that they look to expand their arrangement with the locals, one that’s built on a hefty export business.

Before long, Rafa and Zaida are happily married, the proud parents of two children, Miguel (José Naider) and Indira (Aslenis Márquez). The rest of the family benefits, too, especially Úrsula and Peregrino, who live better than they ever have. Zaida’s younger brother, Leonides (Greider Meza), gets in on the act as well, taking full advantage of the clan’s newfound wealth.

However, despite such tremendous success, as the new decade descends and the demand for pot surges, the once-small-time family dealers see their operation turn into a big business. Suddenly, Rafa and his cohorts must contend with new issues like a stepped-up need for security, competition from rivals and constant government scrutiny necessitating payoffs to officials like the vigilant Corporal Ramírez (Gabriel Mangones), who never misses taking his cut. Such measures require discipline and an orderliness that won’t allow for the intrusion of sloppiness, carelessness or a lack of discretion, behavior becoming increasingly typical of Moncho and Leonides. This change in circumstances calls for changes in practices and procedures in which everyday practicalities come into conflict with longstanding tribal customs and traditions, as well as individual behavior. Some of the adjustments don’t go over well, leading to disagreements, disruption and even death.

Tribal matriarch Úrsula (Carmiña Martínez) makes decisions aimed at benefitting her people, as well as herself, in the engaging new Colombian release, “Birds of Passage” (“Pájaros de verano”). Photo by Jenna Martin, courtesy of The Orchard.

Despite tremendous prosperity, Úrsula’s initial concerns, it would seem, start to surface. But, then, Úrsula, like so many other members of the family, has never turned away from availing herself of the wealth that dealing pot has brought them. The bottom line here is that the greed produced through this venture has torn the family apart, corrupting its members and leading to a civil war (or, more accurately, a wholly uncivil war) amongst all involved, a conflict that threatens to wipe out the clan’s culture, destabilize the entire region and disrupt the way of life of the Wayúu people collectively. The reverence and grace that once characterized this tribe of noble souls is on the verge of being lost – and for what? Ego pride? Rampant materialism? Money? This is the question everyone must now ask themselves before it’s too late – if it’s not already.

It’s been said that necessity is the mother of invention, and Rafa finds that out for himself when he searches for the means to address the dowry requirements. He sincerely believes he must come up with a solution, a notion that drives his thoughts, intents and actions, the cornerstones of the conscious creation process, the philosophy that maintains we draw upon these resources to manifest the reality around us. But, in tapping into the wisdom of this adage, he – like all of us – would be wise to carefully consider what we invent to address our needs.

As practiced conscious creators are well aware, our employment of the process is accompanied by a number of important considerations, such as our responsibility for what we materialize and the consequences associated with what results. Where Rafa’s undertaking is concerned, these issues should be obvious. And, based on how events play out, it’s apparent he hasn’t given much thought to them. He is preoccupied with achieving his objective with little regard for the fallout, a practice more commonly known as un-conscious creation or creation by default.

Not all of the blame rests with Rafa, though. Everyone involved in this scenario plays a part in manifesting this co-creation. Úrsula, Peregrino, Aníbal, Moncho and Leonides, for instance, all have agendas they want fulfilled and will do whatever it takes to see them realized, again all from the standpoint of un-conscious creation. Úrsula’s behavior is particularly appalling in that she takes such a hypocritical, holier-than-thou stance when circumstances go awry without ever acknowledging how she’s personally benefitted from the success of the operation.

A family of small-time drug dealers looks to the future as they watch their operation grow into a big business, a change prompting significant alterations in the lives (from left) of Peregrino (José Vicente Cotes), Leonides (Greider Meza), Úrsula (Carmiña Martínez), Rafa (José Acosta) and Zaida (Natalia Reyes) in “Birds of Passage” (“Pájaros de verano”). Photo by Nic Izzi, courtesy of The Orchard.

Such belief conflicts often yield confused results. That’s because the underlying beliefs directing them are fundamentally at odds with one another. That kind of contradiction often leads to skewed outcomes, mainly because our divine collaborator is unable to sort out the conflicted requests being made of it. Is it realistic, for example, to expect that the materialization of unchecked criminal activity will somehow produce harmonious, risk-free outcomes?

On a larger scale, there are belief conflicts here involving the preservation of traditions and the establishment of new ventures. The old world and the modern one clash with one another, one that almost assures chaos and disruption. And hoping that the two can somehow be maintained without discord is impractical and unrealistic, as the Wayúu come to find out for themselves.

Maintaining our presence of mind is crucial in such situations, especially when it comes to preserving an established and agreeable way of life. We need to remind ourselves of such matters and keep them at the forefront of our beliefs, which is why we need elements in our realities that serve that purpose. Such is the role played by a singing shepherd (Sergio Coen), one who recants the stories of the old ways and the old beliefs as told through native songs, works that serve as the overarching templates for each of the film’s various chapters. The key question, of course, though, is anyone listening? That’s a word to the wise for all of us, not just the native Colombians in this story. 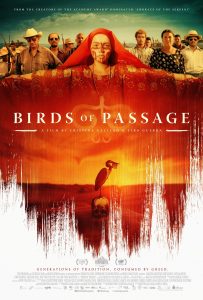 Though occasionally predictable and somewhat meandering in the middle, this excellent offering on the rise of the drug trade and its impact on the country’s native people is otherwise well-executed on all fronts. With fine performances, beautiful cinematography and a nuanced though sometimes-rote script, “Birds of Passage” succeeds in telling a familiar story in an unfamiliar setting. This title, from the creators of the Oscar-nominated feature “Embrace of the Serpent” (2015), is time very well spent. The film, which has primarily been playing the festival circuit, is currently in limited release at theaters specializing in foreign, independent and arthouse pictures.

The search for paradise is something we crave, but sometimes we’re unaware we’ve already attained it. It’s only when it starts to slip away that we begin to appreciate what we’ve lost. That’s a tragedy, to be sure. But, if we take the time to consider what we’re creating – and how our tampering might be causing the grave disappearance of what we’ve so carefully sought to cultivate – we may be able to forestall such a tragic loss. Doing so may enable the birds of passage to pass on by rather than bring about a passing we’d rather not experience.