What can we learn from our pets? Actually, quite a lot, as long as we’re paying attention. The trick, of course, is looking behind what they’re trying to show us, to see the real meaning behind their actions. But, if we do so, we might reap some tremendous benefits. So it is with a four-legged furry mentor in the charming new comedy, “Smuggling Hendrix.”

On the divided Mediterranean island of Cyprus, where combative Greek and Turkish factions have been living under a somewhat uneasy truce for more than four decades, life can be complicated, even when attempting to accomplish the simplest of tasks. That’s what a shaggy, unemployed musician, Yiannis (Adam Bousdoukos), discovers when his dog, Jimi (Pepper), goes astray. The scruffy pooch, named for legendary guitarist Jimi Hendrix, may be lovable, but he can also be quite mischievous. And, unfortunately, because of the island’s bureaucracy, regulations and long-simmering mistrust among residents, something as seemingly simple as retrieving a lost pet becomes an unbelievably complex, incredibly maddening experience.

This situation is especially frustrating for Yiannis, given that he’s three days away from leaving the island to start a new life in Holland. He’s tired of things never working out, not to mention the daily hassles of living in Nicosia, the country’s divided capital city. So it goes without saying that he doesn’t need these kinds of annoyances as he attempts to wrap up his affairs before departing.

So how does this situation come to pass? While running last-minute errands and walking Jimi, Yiannis unexpectedly encounters a number of people he’s trying to avoid – Kika (Vicky Papadopoulou), his ex-girlfriend with whom he had a difficult breakup; Pambos (Toni Dimitriou), a loan shark from whom he borrowed funds to make an unsuccessful album and who now wants to collect on his debt, backed by the support of his hired muscle, Antonis (Marios Stylianou); and his feisty landlady (Georgia Constantinou), to whom he owes five months’ back rent. He does his best to evade them, hiding out in an antique shop. But, while waiting things out, Jimi breaks free and escapes. The dog starts running the streets, fleeing from Nicosia’s Greek-controlled sector to the cordoned off Turkish territory. 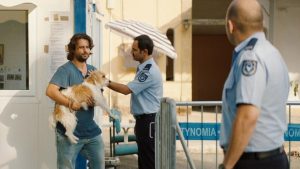 Shaggy, unemployed musician Yiannis (Adam Bousdoukos, left) discovers the pettiness of bureaucratic regulations when he tries to bring his retrieved dog, Jimi (Pepper), across the border from Turkish-controlled territories to Greek-controlled lands on the divided island of Cyprus in the endearing new comedy, “Smuggling Hendrix.” Photo courtesy of The Match Factory.

On the surface, Jimi’s little escapade may not seem like a big deal, but getting him back is, because traveling from one sector of the city to another isn’t especially easy. To move between territories, visitors must pass through two checkpoints, one staffed by national authorities and one manned by United Nations peacekeepers. Even though this process generally only requires showing one’s papers, there are other kinds of restrictions involved. Since the Greek-controlled territory of Cyprus belongs to the European Union, anyone returning to lands under EU auspices must abide by the Union’s restrictions. And, since the Turkish-controlled area of Nicosia is part of a self-proclaimed independent state that virtually no one officially recognizes (including EU member states), anyone returning to Union-governed territories must abide by the organization’s various entry protocols, some of which can be rather stringent, as Yiannis soon finds out for himself.

To retrieve Jimi, Yiannis crosses from the island’s Greek sector to the breakaway Turkish Republic of Northern Cyprus. And, miraculously, he finds his beloved canine surprisingly quickly. However, in attempting to return to his homeland, he’s told by authorities that he can’t bring the dog back over the border. Doing so would violate EU quarantine restrictions against the importation of potential biological health hazards from an unrecognized nation. Yiannis pleads his case, noting his impending departure from the island, but to no avail. So now what?

Unwilling to abandon Jimi, Yiannis sets about devising a plan to smuggle his dog back into the Greek-controlled territory, but that proves easier said than done. Thanks to a series of additional incidents, Yiannis’s plans routinely go awry. Along the way, circumstances bring him into contact with Hasan (Fatih Al), a Turkish mechanic who reluctantly agrees to help arrange an expensive, clandestine cross-border passage for Jimi with the aid of a shady drug dealer, Tuberk (Özgur Karadeniz). When that doesn’t work out, Yiannis then seeks to make alternate arrangements that unwittingly draw him into the company of those he’s trying to avoid – Kika, Pambos, Antonis and his landlady, all of whom make his life even more difficult. And, of course, there’s Jimi, whose antics continue to frustrate his owner. Meanwhile, the clock is counting down to Yiannis’s scheduled departure. Will everything work out in time?

To call this situation a comedy of errors would be an understatement. But, at the same time, it also draws attention to a number of more serious matters worthy of profound consideration, particularly the underlying beliefs that brought them into being. As products of the conscious creation process, the philosophy that maintains we manifest the reality we experience through the power of our thoughts, beliefs and intents, these issues ultimately arise from us, making us the ones responsible for their materialization and inherent qualities, including any alterations that are deemed necessary to make them more to our liking.

Most notably this is true where the island’s political situation is concerned. Cyprus is a divided nation, one saddled with self-imposed borders that keep its inhabitants apart from one another, each faction believing it has a right to its lands, rights of self-governance and so forth. Such a separation didn’t arise by osmosis, though; it was created, brought into being by beliefs of those on each side of the barricades. Ironically, though, the Greek and Turkish residents depicted in the film each routinely insist upon the intrinsic brotherhood that binds them, that, in the end, they’re all members of the same human race.

But, if that’s true, then why the borders? Why are the island’s artificial boundaries set up to keep these supposed brothers apart? Lurking behind the superficial proclamations of unity lies an innate mistrust that has spawned and continues to enforce this division.

At the same time, though, everyone in the story seems to love Jimi. They all seem to be able to agree that affection for a pet transcends the social and political boundaries that separate individuals from one another. So, if everyone can agree on that where an animal is concerned, then why can’t they do the same when it comes to their outlooks toward their fellow man? Jimi helps to unite the humans where he’s concerned, setting an example for them to do the same with one another – provided they avail themselves of it.

But, if that’s going to happen, then a belief change is obviously in order, something that may not be as easy to achieve as one might hope. If the parties can’t agree on something as simple as the requirements for bringing a pet across the border, then what hope is there for the feuding factions to come together in peace and harmony? It’s by no means impossible, but the change must begin with the beliefs each side holds. One can only hope Jimi provides them with some inspiration to do so.

For a suitable reconciliation to occur, for each faction to truly come together as the brothers they claim to be, they must join forces in an act of co-creation, one driven by commonly held cooperative beliefs. It’s a point the film drives home repeatedly where the Cypriot political situation is concerned, with Jimi serving as the catalyst for attempting to draw his divided human countrymen together. The misadventures they jointly share reveal the petty ridiculousness driving the circumstances that keep them apart, conditions that both separate man from dog and fellow man from fellow man. Indeed, if we’re all one big human family, this niggling estrangement seems pretty silly in the end – and, ironically, it takes man’s best friend to help show us the errors of our ways and the beliefs behind them.

In addition to the harmony Jimi’s actions promote, he also exemplifies the spirit of individual freedom. His escape embodies the exhilaration of being unleashed, allowed to run free, both literally and figuratively, to pursue what he wants. This is something most of us long to do but often feel we are unable to experience due to the many ties that bind us. Yiannis clearly wishes for this, for example, as evidenced by his desire to be free of the aggravations of life on Cyprus, not to mention his longing to break the chains that tie him to his past. If that’s to happen, though, he must believe in the possibility, an option that just might happen if he follows Jimi’s lead. Good luck to him and all those who desire to cut loose and run like the wind. 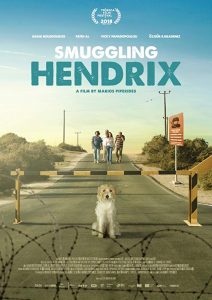 This delightful tale about a scruffy pooch showing us the needless difficulty involved in bringing us together as a unified people is funny, touching and heartwarming. Though a little too political at times, the film nevertheless does an excellent job of explaining a contentious situation that hasn’t received much attention in quite some time, while simultaneously casting a bright light on the need to resolve a dispute that has gone on far too long. Most of all, though, the charm and whimsy that provide the basis of this story make for enjoyable and endearing viewing, showing the lengths some of us, thankfully, are willing to go to for something as elemental as protecting the welfare of our four-legged friends. If only we could do the same for those who walk upright.

When our furry friends behave in line with our wishes, we reward them with treats. But who rewards us? Well, we can’t expect our four-legged pals to return the favor, but, if we follow their leads and the examples they set for us, maybe we can reward ourselves with morsels yummier than the best dog biscuits imaginable. And, when we see just how tasty those treats can be, that will really give us something to bark about.