How often do we take stock of our lives? In many cases, we don’t even ask the question, let alone engage in the act of doing so. But, if our lives seem empty or missing something, we might consider evaluating who we are, what we’re doing and where we’re headed while we still have time to do something about it. The process may be difficult, even painful, but the solution may involve something as simple as just changing our outlook. So it is with an unstoppable caregiver in the thoughtful, profound new character study, “Diane.”

Diane Rhodes (Mary Kay Place) routinely places everyone else first. Without reservation, the aging widow on the brink of her sunset years diligently tends to the needs of others before addressing her own. She delivers food to friends grappling with health issues (Ray Iannicelli, Marcia Haufrecht). She regularly volunteers at a homeless shelter, serving meals to the needy. And she dotes on her bed-ridden terminally ill cousin Donna (Deirdre O’Connell), spending time with her, reminiscing about the past and playing gin rummy, while frequently providing rides to the hospital for her Aunt Mary (Estelle Parsons), Donna’s elderly mother.

As demanding and time-consuming as these commitments are, however, Diane’s biggest caregiver challenge is looking after her son, Brian (Jake Lacy). The unemployed thirty-something lost soul lives in a small, rundown apartment with his latest insignificant other (Gabriella Rhodeen) and appears to be headed for a relapse into drug addiction. She uses her own brand of tough love to try to get him to shape up, but her efforts are often to no avail, a frustrating experience to be sure. 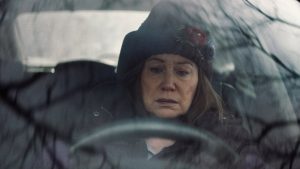 Diane Rhodes (Mary Kay Place) perpetually runs from one errand of mercy to another, always looking after others but not herself, in the thoughtful new dramatic release, “Diane.” Photo courtesy of IFC Films.

Given the foregoing, one might wonder how Diane keeps going. It seems she could use some pampering or, at the very least, allow herself to slow down occasionally. On a visit to see Donna, for example, Diane is so run down from everything that she falls asleep out of exhaustion, an act for which she is gravely embarrassed, prompting her to needlessly apologize to her cousin. Likewise, while volunteering at the shelter, one of the organization’s regulars (Charles Weldon) offers to help her clean up the kitchen after a minor accident, assistance she initially tries to dismiss, as if she’s somehow unworthy of it.

This is not to suggest that Diane is without others who have her back. She comes from a large extended family, and there are plenty of aunts and cousins ( (Joyce Van Patten, Phyllis Somerville, Glynnis O’Connor, among others) who look out after the tireless Samaritan. What’s more, Diane has a fast friend in her fellow volunteer, Bobbie (Andrea Martin), who routinely advises her to take time to take care of herself and to be willing to let others work out their own issues at times, most notably where Brian is concerned. 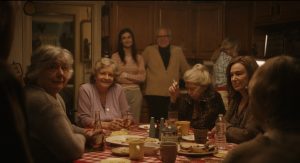 Nevertheless, despite such sincere, heartfelt support, Diane is relentlessly driven in her pursuit of caring for others. But why? That’s what her story gradually reveals. Much of this compulsion seems to be rooted in making up for past mistakes; by doing good, she hopes that she can atone for the errors of her ways, including, somewhat inexplicably, those for which she has already been forgiven. What’s more, with everyone she loves aging and moving ever closer to death, Diane is faced with the shattering of a cherished but naïve longstanding belief that everyone lives forever. This is a painful truth that she quietly hopes to deny by perpetually keeping busy, an effort that ultimately, inevitably and sadly goes for naught with virtually everyone she seeks to help.

How will Diane resolve these issues for herself? That’s what remains to be seen as her story (and those of everyone else around her) plays out. One can only hope that she comes up with answers that satisfy her sensibilities and provide her with the peace of mind that forever seeks to elude her – before life catches up with her.

On its face, “Diane” may seem like a simple tale about daily living, a study of a fairly ordinary character. Most of us probably know a “Diane” of our own, one who continually gives and gives and asks for little in return. It’s a rather common character type, one rooted in reality and not at all that unusual.

So why should we care about her or her story? It’s because this film takes a very deliberate approach in telling it, specifically when it comes to showing how we shape our existence through our thoughts, beliefs and intents, the building blocks of the conscious creation process, the philosophy that maintains we manifest our reality through these metaphysical tools. And writer-director Kent Jones has done an excellent job in demonstrating that for us, an approach that’s part instruction manual, part cautionary tale and part exercise in enlightenment.

As discussed above, Diane’s reluctance to accept help is clearly rooted in her beliefs about herself. She believes she needs to continually do good works for others to make up for past misdeeds. In some ways, it’s easy to understand how she might feel that way, especially given the often-guilt-ridden way that many of her generation were raised. But must we perpetually devote ourselves to the well-being of others at the expense of ourselves out of some sense of obligation, even in instances where we’ve been forgiven for our transgressions? Well, that depends, but, no matter what, that’s where our beliefs come into play. If that’s what we believe we must do, then that’s how our existence will unfold. But we should understand, as the film attempts to make clear, that this is not an intractable absolute; we have other options open to us if we choose to avail ourselves of them. In the end, though, it all depends on the beliefs we choose to embrace, as they’ll set in motion what results. This is the lesson for Diane – and for those of us who share her outlook.

There’s certainly nothing wrong with wanting to be of help to others. In fact, conscious creation maintains that one of its most laudable objectives is to engage in acts of value fulfillment, the concept that maintains we act as our best, truest selves for the benefit of ourselves and those around us, based on our beliefs. Where Diane is concerned, she certainly has the benefit to others part down, but, when it comes to being of benefit to herself, that’s obviously open to debate.

Conscious creation asserts that we manifest our own reality, not the reality of others (even though they may benefit from our efforts in some ways). If we’re make the most of that, then we must be sure that we create circumstances that allow us to operate from a position of personal strength, not only to take care of ourselves, but also to engage in the good works we choose to do for others. Continually giving ourselves over to the needs of others without taking care of ourselves will eventually take a toll on us, making it difficult or impossible to help ourselves or those we seek to serve. This is, in effect, an act of giving away our personal power, something that won’t end up serving anyone in the long run. 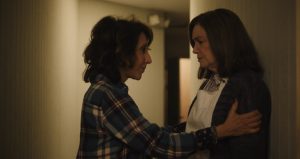 This is an important consideration in learning how to make the most of the time we’ve got. By wisely employing our metaphysical resources, we have an opportunity to maximize our accomplishments, as well as our enjoyment and satisfaction of life. This grows ever more critical the further we travel down the road of life, a notion depicted as a cinematic metaphor throughout the film. It becomes particularly crucial the closer we come to the end; we must ask ourselves, how do we want to spend the time we have left? Where do we want to place our thoughts, beliefs and intents? Do we indeed wish to make the most of things for ourselves and those we seek to help? Or are we going to fritter our time away worried about inconsequentials, such as insignificant details, the opinions of others or ill-placed, self-created feelings of trumped-up guilt? There’s powerful food for thought in this, again both for Diane and those of us who share her perspective.

We must also be mindful about others’ feelings in how we conduct ourselves in these areas. For example, Diane nearly always turns down the assistance others offer her, believing she’s somehow not worthy of it. But does she ever consider that she might be denying others the opportunity to be of service to someone who needs help? One could even go so far as to say that her attitude is a selfish one, because she prevents others from living out their value fulfillment. It’s a consideration we should always keep in mind when such situations arise. We might even learn something from them, namely, that it’s perfectly fine to be the recipient of aid and not always the one to dispense it. 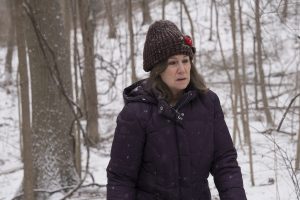 As we undergo such experiences, we may discover aspects of ourselves of which we were unaware. This is essential to our personal evolution, a process directly in line with the conscious creation concept that we’re all in a constant state of becoming. This raises the prospect of living a life that is perpetually revelatory, a theme that permeates Diane’s story on multiple levels and becomes more apparent the further it progresses. It also shines a light on the notion that nothing lasts forever, a difficult truth that Diane must come to terms with, especially when  it comes to realizing that, in the end, everybody dies, no matter how hard we may work at trying to prevent it from happening.

This may seem like a lot to take in from a simple story about the life of an aging caregiver. But that’s precisely what makes this such a quietly powerful and poetic film. Rich in insight and symbolism, this little drama elevates a seemingly everyday tale to the height of inspired storytelling. We can thank writer-director Jones for giving us such a touching tale. We can also thank executive producer Martin Scorsese for backing this project, the kind of profound, introspective piece one might expect from the onetime aspiring priest-turned-filmmaker. Mary Kay Place gives an excellent performance in an uncharacteristic dramatic role, backed by a superb cast of supporting players, including many veterans who bring their best game to their roles. Please note, though, that this one may not last long in theaters, so catch it while you have the chance – you won’t be disappointed. 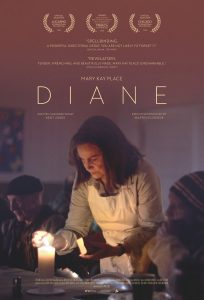 It’s been said that “life is what you make of it.” But how often do we really take the time to examine that statement? What exactly are we making of it? And are we even aware that we truly can do so? We may glibly agree to the idea in passing conversation, but are we really employing the notion in our everyday lives (and, if so, to what end)? Thankfully, “Diane” helps to bring these questions into sharp focus, important considerations for those of us who are closer to the finishing line than the starting point. It’s something we should take to heart and seek to work out while we still have the time and opportunity. It would indeed be a shame to let the clock run out with our work unfinished – and our peace of mind still in limbo.