Skip to content
Home/Conscious Creation, Drama, Movie Reviews/‘Searching’ distinguishes what we know from what we think we know

‘Searching’ distinguishes what we know from what we think we know

We can take comfort in knowing that certain aspects of our life are exactly as they seem to be. Or can we? Are we getting a clear, accurate picture of the people, places and things that make up our existence? Or are we falling prey to what we’d like to think we know about such elements of our reality? The result can be eye-opening – and disillusioning – as an anguished parent discovers for himself in the sizzling thriller, “Searching,” now available on DVD, Blu-ray disc and video on demand.

When David Kim (John Cho) loses his wife, Pam (Sara Sohn), to lymphoma, he’s devastated by her death. However, with his teenage daughter Margot (Michelle La) to raise, he needs to pull things together to help the adolescent become the talented and successful young woman who has made him and her late mother so proud. He provides a deft mixture of love, support and gentle but firm guidance in hopes that he’ll be able to complete a task on his own that he had so lovingly shared with his deceased beloved.

One evening while Margot is at a study group meeting at a friend’s home, she contacts her dad via video phone to let him know that she’ll be staying late with her classmates. He takes note of her call and, not long thereafter, goes to bed. While David’s asleep, though, Margot apparently phones again, leaving a message to have him call her back. Upon awakening, David gets the message and returns the call only to get Margot’s voicemail – a process that’s repeated several more times with no response. Needless to say, he’s worried. 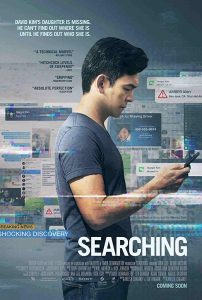 David methodically tries to track down his daughter’s whereabouts throughout the metropolitan San Jose area. He contacts friends, parents of friends, her piano teacher and others, all to no avail. He learns she didn’t show up for school, a cause for greater concern. He then goes through her computer records, tapping into her email and various web sites to see if he can obtain additional clues about new places to look. But, when those leads continually come up empty, he realizes he needs to contact authorities. He reaches out to the police, who assign Detective Rosemary Vick (Debra Messing) to his case.

Detective Vick takes a strong interest in the investigation, urging David to find out as much as he can about his daughter’s online life in hopes that any new revelations will provide help in solving her disappearance. He agrees and begins probing Margot’s cyber identity in earnest. And what he finds shocks him: Margot, it seems, is nothing at all like he’s thought she is – secretive, a relative loner and someone who has contacts with people he never dreamed she’d associate with.

The discovery overwhelms David, but, as requested by the police, he shares what he finds. Ever the professional, Detective Vick offers whatever official advice she can, but, as a parent herself, she also seeks to provide solace by telling David about her own personal experience with her troubled teenage son, a story not unlike what appears to be unfolding with Margot. David takes some comfort in this, but it doesn’t change the fact that his daughter is still missing.

Together, David and Detective Vick continue to work the process of trying to find the missing teen, an undertaking that grows ever more disturbing and confounding, especially when many seemingly possible leads don’t pan out or turn out to be utterly frustrating red herrings. It’s stressful, too, particularly when some of the revelations involve individuals David never would have suspected as being part of this, such as his brother, Peter (Joseph Lee). Many illusions, it seems, come up for shattering.

To say more would reveal too much about how this picture plays out. However, as the story progresses, David is faced not only with the challenge of finding Margot, but also with having to reconstruct the cherished and seemingly unshakable impressions he holds about her and others. It’s a lot to go through all at once, especially since it’s coming not long after his wife’s passing. And it’s a story that proves trying both for the protagonist, as well as those watching it.

“Searching” is a story that has much to do with what we believe about others. But, as becomes apparent, we find that those beliefs can prove inaccurate, largely because they’re rooted in what we would like to believe about them. Unfortunately, when we imbue others with traits that we hold dear and those qualities don’t jibe with those that they believe about themselves, we can come up against the devastatingly disillusioning outcome that our colleagues, family and friends may not live up to our expectations.

Understanding this is crucial if we hope to establish realistic and meaningful impressions of others. It means using the power of discernment to get an accurate handle on our beliefs about them and to avoid the pitfall of distorted wishful thinking. But, then, this goes without saying for any undertaking we attempt to pursue through the conscious creation process, the philosophy that maintains we draw upon such metaphysical resources in manifesting the reality we experience.

Of course, we must also understand that, when it comes to our interpersonal relationships, these are co-creations that involve both us and others. Their beliefs figure into the equation as much as ours do, and, while we may not be able to get a precise handle on the beliefs of others, we might be able to glean insights about them by tapping into our intuition, one of the key components that factor into our belief formation. Regrettably, this is a resource we tend to underutilize, mainly because its nature tends to be viewed with skepticism, seemingly less trustworthy than our rational, logical intellect. By shortchanging it, however, we cut ourselves off from something that could prove valuable in grasping the motivations and outlooks of those we seek to understand.

This is particularly crucial in the age of the Internet, where it’s possible – in fact, quite easy – to distort our persona, creating one that deviates significantly from the face we show the world in person. It’s even feasible to fabricate an entirely different profile of ourselves, one that’s intentionally cryptic or deceiving, making it difficult for others to discover who’s really behind the mask. That’s a point driven home here by setting the entire film in cyberspace, with the story told on computer screens using video cameras, web site pages, pop-up windows, and text and email messages, showing how easy it is to convey deliberately crafted, purposely camouflaged impressions of oneself. One might legitimately wonder why anyone would do such a thing, but, given that conscious creation makes any outcome possible, there may well be reasons behind such an endeavor that others may understand but that we don’t.

Such undertakings can prove particularly difficult to unwind in scenarios like the one David faces in this film. When one approaches these circumstances from a standpoint of heartfelt love and sincere intent but repeatedly comes up against calculated subterfuge and deliberate deception, the result can be devastating, both from a disillusionment standpoint, as well as where our emotions are concerned. It’s a situation no one would wish on another, especially a loving, desperate parent seeking to find a lost child.

This slow-burning, intense thriller has more twists and turns than a winding mountain road. What’s more, through this novel feature film debut, director Aneesh Chaganty, a former Google employee, has created a new storytelling approach that uses an innovative cinematic vocabulary, opening the door to an inventive way of spinning yarns on celluloid. Admittedly, some of the computer screen contents pass by a little too quickly and could stand to be enlarged in some instances, but this is a minor shortcoming in the overall narrative context. Moreover, in telling the story in this way, Chaganty offers viewers a potent cautionary tale about the pitfalls of cyberspace communications and what we can actually believe about the material showing up on our computer screens, particularly when it comes to the identity of the individuals we’re supposedly communicating with.

This largely overlooked cinematic gem came and went from theaters rather quickly when it was released in late 2018, but, thankfully, it seems to be finding a life of its own on home viewing options. It has also been the recipient of a number of accolades, such as its selection as one of the National Board of Review’s Top 10 Independent Films of 2018. It earned John Cho an Independent Spirit Award nomination for best male lead. And, at last year’s Sundance Film Festival, the picture picked up the Audience Award and the Alfred P. Sloan Feature Film Prize. Not bad for a first feature from a new industry voice.

In the end, as this film shows, we’re all searchers at heart, an effort made easier by the rise of the Internet and a growing understanding of our inner selves, phenomena that in many ways are mirrors of one another. As we try to grasp who we are, the nature of existence and our place in it, we embark on journeys of discovery of all kinds, hoping that they’ll give us meaningful insight into our conscious awareness and the human experience. But, as we set out on such odysseys, we must be prepared for a variety of situations, and the more we can do so by developing our proficiency as conscious creators, the better off we’ll be – or so one would hope.