Few among us would deny the attraction we feel for a sense of personal power. It enables us to direct our destiny and shape the existence we want for ourselves. But it also comes with a temptation, one that can easily get out of hand if left unchecked. And it carries consequences, especially if we misuse it in our dealings with others or our community. It’s an issue that the residents of a neighborhood past its prime wrestle with every day in the tense new dramatic release, “Dogman.”

Life in a rundown Italian seaside community has its residents on the edge, thanks to the relentless crimes, bullying and intimidation of Simoncino (Edoardo Pesce), a former boxer with anger management issues and a serious cocaine habit. He does as he pleases, trashing property, burglarizing homes and businesses, and beating up the vulnerable, including his own mother (Nunzia Schiano), whenever he feels like it. The locals fear him, but they also believe that something has to be done about him, given that authorities do nothing to stop him. It’s like living on the American frontier in the 19th Century, a story that brings new meaning to the term “spaghetti Western.”

It doesn’t help matters that Simoncino has enablers who let him get away with what he wants. Whether they act out of self-preservation or the promise of rewards for their assistance, his shady colleagues quietly help him out when the need calls, often despite publicly condemning his actions. That’s most true of a kindly but weak-willed dog groomer, Marcello (Marcello Fonte), whose conciliatory gestures are mostly intended to keep Simoncino from unduly picking on him. Sometimes Simoncino throws a bone to his coerced cohort, but it’s often paltry and usually less than promised. 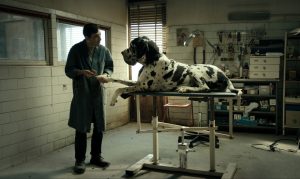 Marcello (Marcello Fonte), a sensitive but weak-willed dog groomer in a rundown Italian seaside community, does his best to carve out a living while fending off the neighborhood bully in the tense new dramatic release, “Dogman.” Photo courtesy of Magnolia Pictures.

Marcello’s willingness to help Simoncino seems puzzlingly out of character. Given how he dotes on his canine clients and lovingly cares for his young daughter, Alida (Alida Baldari Calabria), his readiness to go along with the bully’s schemes come across as wholly anomalous. At times Marcello’s actions appear aimed at quelling the tension. Sometimes they’re efforts to save his own neck. And occasionally he sees opportunities to potentially get something out of these schemes. But, most of the time, his involvement is inexplicable. One can’t help but wonder what he’s thinking.

As time passes, Simoncino’s offenses grow increasingly unpredictable and ever more despicable. Meanwhile, Marcello’s responses become progressively more desperate and humiliating. He even takes the rap for crimes he didn’t commit. And, as all of this plays out, the neighbors are losing their patience with the entire situation. But what can be done? Marcello’s faced with quite the dilemma, but he knows a resolution is desperately needed – and soon.

As much as Simoncino looks to profit materially from his antics, he’s obviously most concerned with the acquisition of power and control over his neighbors and community. He actively asserts himself to amass these commodities, while those around him (particularly Marcello) routinely and willingly hand them over. Understanding that dynamic is thus crucial to appreciate why each of these characters experiences life as they do. 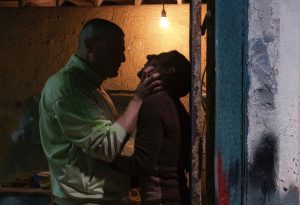 Simoncino succeeds in his efforts because he believes he can get away with them. He envisions what he wants and then makes sure he acquires or develops the means to get it, all of which are products of his thoughts, beliefs and intents. These are the cornerstones of the conscious creation process, the philosophy that maintains we employ these manifesting tools in materializing the reality we experience. The neighborhood bully understands and makes use of the power behind these metaphysical building blocks all too well, even if he’s unaware of the existence of this process or what it’s called.

By contrast, Marcello and the others in his neighborhood cower in fear, believing there’s nothing that can be done about the local nemesis. In embracing that belief, they create a reality based on that notion; they give their power away, leaving them with nothing to defend themselves against someone who wields it so effectively. Thus it should come as no surprise why they’re subjected to such intolerable conditions.

With such circumstances in place, one might think that all is lost, that remediation is impossible. But, given that conscious creation makes any conceivable option attainable, futility need not be inevitable; change is indeed possible. However, it requires an alteration to the manifesting beliefs that are creating these conditions in the first place. Nevertheless, as long as the prevailing thinking is allowed to hold sway, nothing will change; new beliefs must be formulated and implemented to make that happen.

Of course, it takes more than just new beliefs; they must be followed up with action. That means beliefs must be put into place envisioning both the nature of the sought-after change and how it’s to be achieved. For much of the film, that latter consideration seems to be the stumbling block to seeing new possibilities realized. If area residents really want something different for themselves, they must devise plans that get results and go beyond mere wishful thinking.

This is where power again comes into play. Marcello and his neighbors must insist on taking it back and putting it to use to attain what they want. The question in this, of course, is, do they possess the personal fortitude to see this through? That means ditching any fear-based beliefs that they cling to, embracing the courage necessary to implement plans for change (and, in this case, change that’s inherently radical, far different from the circumstances to which they’ve grown accustomed).

For the results to be truly meaningful, they must also consider how personal integrity factors into the mix, for it will have tremendous impact on the nature and quality of the results. In Marcello’s case, for example, he’s a sensitive, thoughtful, caring individual, so, if he’s to come up with a plan that sincerely satisfies him, he needs to figure out how he can achieve results without violating his own code of personal conduct. However, that may prove to be a tall order under the circumstances.

Can Marcello indeed make that happen? That remains to be seen. It’s something that will require quite a feat of creativity, one that employs options that may not have been previously contemplated, surpassing the limitations of easy answers that could be construed as personal compromises. Should he resort to convenient fallbacks, he could well end up disappointed with the outcome, one that’s not in line with his standards, disappointingly demonstrating that he’s no better than the foe he’s attempting to vanquish. It’s something we must all heed when faced with situations like this, for the results might easily expose who the real “dogman” is in these circumstances.

I must confess to having a love-hate relationship with this offering. While the film presents an interesting premise that’s well constructed during the first two acts, it seems to paint itself into a corner as it heads toward the conclusion, not quite sure how to wrap up the story. To avoid losing the essence of its central message, the picture regrettably resorts to predictable, conventional means to accomplish this goal, creating something of a letdown in light of the originality depicted at the outset. Sensitive viewers should also be aware that the film features some violent and disturbing sequences. They never get gratuitously out of hand and are generally presented in context, but they’re far from tame, and those who are easily upset by such images should bear this in mind. “Dogman” has been featured at many film festivals and is currently playing in limited release in theaters specializing in independent and foreign film. 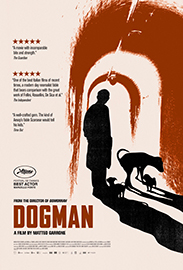 Despite its shortcomings, “Dogman” has received its share of accolades. At the 2018 Cannes Film Festival, director Matteo Garrone’s latest earned Fonte the best actor award for his portrayal of the timid dog groomer, a role in which he comes across like an edgy version of a young Jerry Lewis. In addition, the film captured the Festival’s Palm Dog Award in recognition of its outstanding canine cast, as well as a nomination for the Palme d’Or, the event’s highest honor. What’s more, at the BAFTA Awards, the picture picked up a nomination for best foreign language film.

An old adage maintains that “absolute power corrupts absolutely.” Based on the story presented here, it’s easy to see how that can happen, too. But personal power need not become a runaway carriage; it can be tempered and focused into productive pursuits, provided that we make the effort to funnel our beliefs in that direction. And, if we should get off on the wrong path, it’s something we earnestly should consider doing before our lives go to the dogs.