As most of my readers are aware, I rarely write negative film analyses. The point of this blog is to inform followers about movies that offer inspiring examples of enlightening concepts that we can use to help ourselves in leading more fulfilling lives, particularly where the use of conscious creation/law of attraction principles is concerned. However, every so often, a picture comes along that I feel compelled to write about for reasons other than those stated above. Those instances nearly always involve releases that I find notably disturbing – or, in this case, wantonly disgusting – offerings that, to me, represent deplorable cinematic trends or genres. And that’s what brings me to “John Wick: Chapter 3 –  Parabellum” (web site, trailer).

If “pornography” is truly defined as “having no redeeming social value,” then this positively awful release would most certainly qualify. The film’s simplistic, often-improbable, virtually nonexistent plot, endless fight sequences that quickly become repetitive and boring, relentlessly gratuitous violence, and monotone acting by the protagonist combine to transform what should be a compelling action thriller into a tasteless snooze that had me checking my watch more than a few times. With the exception of a handful of intriguing supporting performances (Angelica Huston, Laurence Fishburne, Halle Berry, Ian McShane, Lance Reddick) and the occasional infusion of humor, this one has nothing (and I do mean nothing) else to offer.

Given the perspective from which I write, I’ll admit that I look for something more meaningful than just a captivating story. I prefer offerings that have something to say while spinning a good yarn. But, contrary to some misconceptions of my work, I’m not opposed to entertaining cinema for its own sake, and that includes action-adventure sagas, such as a number of the Marvel Universe releases and the most recent installment in the “Mission Impossible” franchise, which made it onto my Top 10 list for 2018.

There’s also a misconception that, because I write about cinema from what I’ll loosely call a New Age viewpoint, I’m completely opposed to action and violence in films. That’s not true, either, a position I have explained often in my writing and radio interviews. I have no reservations about their inclusion when they’re featured in films with compelling stories and presented in context, not gratuitously. For instance, I’m a big fan of the James Bond franchise and the aforementioned “Mission Impossible” series. I delighted in the over-the-top humorously macabre “Kingsman” debut (2014) and both “Deadpool” installments (2016, 2018). I even had no problem with the excessive carnage in “Watchmen” (2009), an offering that very consciously, cleverly and intentionally used this plot device to make a point about it. In all of these cases, there was a purpose for the action and violence shown on screen, they were done so in context, and they integrally helped to make their films work. To me, that’s responsible, capable filmmaking.

However, in the latest John Wick offering, these elements are clearly out of control, going on endlessly for their own sake with a woefully weak plot to string them together. There seems to be more interest in seeing how high the body count can go without regard for telling a worthwhile story. And it lacks the humor and relevance of other pictures that employ these qualities to help reinforce their missions. 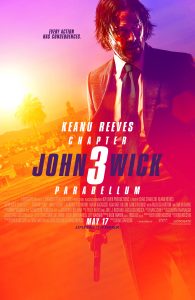 But what troubles me most is the callous, unfeeling approach that’s used here. In many sequences, the narrative consists of little more than carrying out a brutal killing and then moving on to the next in a perpetual cycle of rinse and repeat. And, to make matters worse, viewers gawk in amazement at such butchery, finding the screen action “cool.”

I find that reaction utterly appalling. I dare anyone to explain to me how such nonstop cold-blooded murder is “cool” in the slightest. Indeed, if we’re ever to see anything change in our world, we’ve got to stop glorifying such horrendous acts, even in our entertainment vehicles. As a Chicagoan who has lived through years of senseless street killings, like many of my fellow Windy City residents, I have found such acts wholly inexcusable, yet the kind of deplorable violence that’s celebrated in a movie like “John Wick” is … “cool?” Forgive me, but that kind of logic completely escapes me, even if it is “just fiction.”

In preparing this commentary, I’ve considered the viewpoints of the fans of this film. Many have contended that there was tremendous artistry and skill put into creating and filming the fight sequences, and I don’t doubt that. But what good is that if the material itself is, essentially, intrinsically pointless? Moreover, many fans have likened the picture to exquisitely choreographed martial arts classics like Bruce Lee’s “Enter the Dragon” (1973). However, despite such lofty but ultimately superficial comparisons, this offering lacks the soul of its predecessors, coming across as cold, emotionless and unconcerned for its characters and the message it’s sending to audiences.

In my view, I find myself having to agree with those few courageous dissenting critics who have, for all intents and purposes, essentially claimed that “there’s no there there”. Most of them have said that this installment plays like a video game version of the movies in this franchise, and I’d agree that they’re spot-on in their analyses. Just as video games heartlessly celebrate the deaths of their characters, so, too, does this film. And, as there seems to be some indication that some impressionable gamers may be unable to distinguish between video game kills and real life deaths, maybe filmmakers should take a lesson from that and consider what they’re putting out on the world’s movie screens. It seems to me to be the responsible thing to do.

Unless you have a penchant for watching senseless, recurring violence run amok, save your money where this one is concerned. And, if you’re like me and take issue with the message pictures like this are sending, please share this rant with others. If enough readers protest against such wantonly disgusting releases, maybe we can get the movie industry to rethink what it’s selling to the public. The #MeToo movement has already shown that such reform efforts can have an impact; maybe that result is transferable to one like this as well. The well-being of our society’s future could depend on it.