‘The Tomorrow Man’ urges us to live in the moment

There’s nothing wrong with looking ahead – unless, of course, it becomes so compulsive that it keeps us from enjoying (or perhaps even recognizing) what’s going on around us – the present moment in which we dwell. It’s somewhat akin to being more worried about taking a smart phone photo of a significant event than the event itself. Yet, as comical as that may sound, all too often our focus is misplaced, myopically cast on the erroneous priority. We can miss a lot by doing that, something we could end up regretting if we do it for too long and let what truly matters go unrecognized as time evaporates away from us. Such is the potential pitfall faced by a worrisome, somewhat paranoid senior in the new romantic comedy-drama, “The Tomorrow Man.”

Ed Hemsler (John Lithgow) worries incessantly about the future. The retired sixtysomething former systems analyst lives in a small town that could be virtually anywhere in the US, where everyday solid citizens dutifully go about their business believing that nothing will ever change as life goes on. But not Ed. He spends virtually all of his time – and money – prepping for some kind of looming but undefined disaster, be it war, economic collapse, martial law or Donald Trump’s re-election. He readies for this enigmatic indeterminate catastrophe by stockpiling everything from food to toilet paper to condoms in a secret storage room in his house, one whose existence he guards as if it’s Ft. Knox.

Ed’s preoccupation makes him something of a loner. The senior divorcee separated from his ex-wife years ago, and he has little (and mostly one-sided) contact with his son, Brian (Derek Cecil). Because of his relentless pontificating about the need to be prepared, as well as his incessant conspiracy theory rants, nobody really wants to talk to him except for a handful of kindred spirits on the internet. He doesn’t seem to mind too much, but he also does little to change his circumstances – that is, until he goes shopping at the local supermarket one day.

While picking up items for his everyday needs and supplementing his storage room’s supplies, Ed spies a spry but reserved fellow senior, Ronnie Meisner (Blythe Danner). He’s instantly smitten. Yet acting on an attraction to someone else is decidedly out of character for Ed, and his awkward initial attempts at getting to know her fall flat. Nevertheless he finds something special about Ronnie, and, in time, she discovers the same about him. And so, despite their cumbersome beginning, before long, the seemingly mismatched duo is an item. 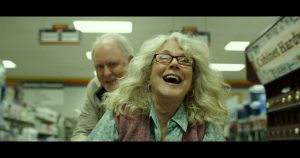 As their relationship evolves, however, not everything proceeds smoothly. Despite his feelings for Ronnie, Ed never lets go of his survivalist prepping. At the same time, Ronnie struggles with baggage of her own, issues that conceal a dark secret that she’s reluctant to share with anyone, including Ed. Their respective concerns hang over each of them (and one another) like pesky little dark clouds that intrude on what should be a happy time in their lives. In essence, Ed frets about a future that hasn’t happened (and may never do so), while Ronnie struggles to let go of a painful past that obstinately persists despite any efforts to shed it.

One can’t help but hope that this otherwise-seemingly happy couple will figure out a way to make things work. But, no matter what they do, Ed and Ronnie don’t seem to be able to get out of their own way. Can they succeed in their efforts? And will they do so before it’s too late to do anything about their circumstances? With the clock ticking and uncertainty always lurking around the corner, there may be fewer and fewer opportunities to rectify their situation. Will they choose happiness or succumb to inevitable disappointment?

As in virtually any situation, the choice rests with Ed and Ronnie, and those choices are governed by their respective and joint beliefs, the building blocks of the conscious creation process, the philosophy that maintains we draw upon these resources to manifest the reality we experience. And, because our beliefs can take any form we desire, we can essentially use them to create whatever we want. The trick in understanding this, though, is that we’re the ones who choose which of those beliefs to embrace, so it’s thus up to us as far as what we experience.

For Ed and Ronnie, their respective beliefs are governed by elements that make their alteration challenging. As noted previously, Ed is preoccupied with the future, while Ronnie is tied to her past. In each case, they’re invested in beliefs associated with time frames over which they have no control. Ed’s future has not arrived and, consequently, could end up taking myriad forms, none of which can be definitively predicted in advance. Meanwhile, Ronnie’s past is behind her, a done deal over which she has no say over how it unfolded, regardless of how unpalatable or unpleasant she may find it. So that leaves only one temporal window over which they (or any of us, for that matter) have any meaningful control – the present.

Seasoned conscious creators understand that the present is the point of power, because it’s the only time frame over which we can shape its character and qualities. The concept of “living in the moment” is thus a principle we’d be wise to adopt.

However, as much as we may like the sound of this idea, many of us find it difficult to put it into action, and that’s largely because of the persistence of our beliefs. This in itself shows how powerful they are and how doggedly they can hang on, despite efforts to change them, even when we know that the ones we’re embracing aren’t necessarily in our best interests.

This casts a bright light on the need to get a firm handle on the precise nature of our beliefs. This involves looking inward and taking stock of who we are and what we really believe. Some of us may not succeed at this out of fright at what we might find, what we could stand to lose or the uncertainty of having to venture into uncharted territory. Nevertheless, if we want to truly be effective as conscious creators, we must be courageous enough to tap into our authentic selves to determine exactly what’s driving our manifestations, how we might want to change them if needed and what it takes to allow our personal integrity to shine through into our materializations.

Where Ed and Ronnie are concerned, for example, they’re at the age where they’re each staring their own mortality squarely in the face. That’s a scary prospect for those who haven’t considered it, and denial is a coping mechanism commonly employed for evading it. But is this strategy helpful in the end? If Ed endlessly plans for the future, then maybe he’s lulled himself into believing that his life will also carry on in perpetuity, that his constant vigilance against potential calamities will somehow stave off the one that ultimately scares him most. Similarly, if Ronnie believes she can bury herself in the memories of her past – no matter how distressing some of them may have been – then perhaps that will obscure her appearance at the time when the Grim Reaper comes knocking at her door.

The sunset years can be so bright that they really do require shades as seniors Ronnie Meisner (Blythe Danner, foreground) and Ed Hemsler (John Lithgow, background) learn for themselves in “The Tomorrow Man.” Photo courtesy of Bleecker Street.

Realistically speaking, however, do these really sound like viable solutions? Wouldn’t it be preferable to channel our beliefs into more fruitful pursuits, ones that give us joy and allow us to relish whatever time we have left, to truly live in the moment? Such options are available, but it’s up to us to embrace beliefs that genuinely make them possible. Indeed, the choice is ours.

This delightfully quirky senior romance tale charms from beginning to end. Its deceptively subtle, surprisingly insightful narrative gives viewers much to think about, especially those of us who are a little further along our life paths. Its bittersweet story line presents a realistic view of romance later in life, particularly for partners who cling to eccentricities they cannot shed but who at least have one other to see their way through the tenuous and painful process. While not all elements of the film or the characters work, and even though some aspects are a little too formula for their own good, the picture nevertheless has more than its share of funny twists and turns, as well as superb performances by John Lithgow and Blythe Danner as the unlikely consorts. Director Noble Lincoln Jones’s beautifully shot debut feature serves up an excellent example of living in the moment, without worrying about a past that has come and gone and a future that has yet to arrive. Think of this as a geriatric version of “Seeking a Friend for the End of the World” (2012) but without the rampant silliness, and you’ve got an idea what this release is all about.

“The Tomorrow Man” is currently playing in limited release in theaters specializing in independent and arthouse cinema. Given the upcoming crush of summer blockbusters, this offering may quickly be overwhelmed by the competition and swept out of moviehouses, so act fast if you hope to catch this one on the big screen. 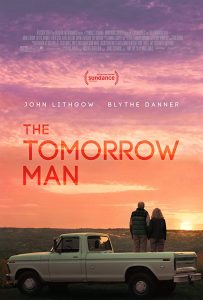 It would be foolhardy to say we should never consider the contingencies available to us. Indeed, Plan B has its place. But, when we engage in the kind of preparation that leads us to making so many plans that we run out of letters of the alphabet, maybe we need to step back and examine what we’re doing – and why. When planning our life becomes more important than living it, something is definitely amiss. The cautionary tale of “The Tomorrow Man” puts this on display for all of us to see, reminding us to look up once in a while and enjoy the view – while it lasts.