No matter how much we may enjoy something, be it food, entertainment or our wardrobe, sometimes we want to shake things up a bit, trying out new offerings to stay fresh and invigorating. For that to happen, however, we often depend on others to make those new options available to us. Meanwhile, the purveyors of those commodities who fail to change with the times may easily be left behind when innovators step up to take their place. Such downfalls are avoidable, though, thanks to the power of reinvention, a prospect explored in the devilish new comedy, “Late Night.”

Talk show host Katherine Newberry (Emma Thompson) has been a staple in late night television for over two decades. As the first woman to host her own long-running late night talk show, she broke new ground in the TV industry, a breath of fresh air who captivated viewers with her commitment to excellence for intelligent and entertaining programming. Unfortunately, after more than 20 years, that fresh air has become a little stale. With no changes in format and content, Newberry’s show has become something of a dinosaur, with languishing ratings and no apparent prospects of turning things around. And, to make matters worse, the host herself is in denial that there’s a problem, insisting that her approach is solid because it’s rooted in quality. However, given the deterioration in the audience, the numbers would appear to disagree. New network president Caroline Morton (Amy Ryan) wants the circumstances to change, because, if they don’t, she’s ready to replace Katherine with someone younger and hipper, a host more attuned to the wants of a changing audience.

One of the problems with the show, observers contend, is that, except for the host, it’s an all-male production. The entire writing staff is made up of men, as are most of the producers, and that’s apparently due to Katherine’s well-known dislike of women, a trait she doesn’t even recognize in herself. Of course, she might get a better sense of that if she spent more time with her staff; as it stands, she doesn’t know her own writers, having not even met most of them (even though she makes great demands of them). To bring a new perspective to things, Katherine’s right-hand man, Brad (Denis O’Hare), suggests that she hire a woman for the writing staff, a decision to which the host reluctantly agrees. 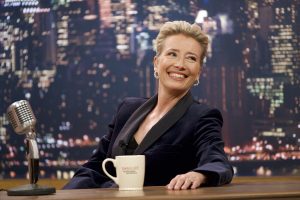 Enter Molly Patel (Mindy Kaling). The inexperienced chemical plant efficiency expert may seem an unlikely candidate to walk into this environment, but, as a woman and a person of color, adding an Indian female to an aging all-male, all-white writing staff could be just what’s needed to shake up the show – that is, if she’s given a chance. Fitting in is far from easy, with many seeing Molly as little more than a requisite minority hire and some even viewing her as the new department go-fer. What’s more, not only does she not have the backing of her fellow writers, but she also doesn’t seem to receive much support from Katherine, who continues to run the show like the control freak she has always been. If Molly’s going to succeed, she’s going to have to make quite an impression, breaking through a lot of tradition and resistance to change, from the top on down.

With nothing appearing to change, however, the show’s status continues its inexorable slide. Meanwhile, Caroline continues to pressure Katherine to boost the program’s numbers. She also threatens to replace the host with young comedian Daniel Tennant (Ike Barinholtz), a crude, unfunny rising star whom Katherine detests for his tasteless jokes, someone she sees as far from fitting for the franchise she has so carefully built. It becomes apparent something has to give.

The prospect of losing the show has Katherine seriously worried. After all, as she admits, it’s only one of two things in her life that she really cares about, the other being her husband, Walter (John Lithgow), who’s now suffering with advancing Parkinson’s Disease. Having to face the possibility of losing Walter and the show thus puts Katherine’s back up against the wall. But what is she to do? 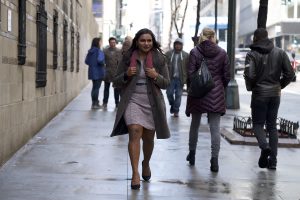 Molly Patel (Mindy Kaling), a newcomer to TV comedy writing, struggles to make a name for herself on an all-male, all-white writing staff in a new comedy penned by the actress, “Late Night.” Photo by Emily Aragones, courtesy of Amazon Studios.

This scenario opens the door for Molly. She convinces Katherine that, as noble as the production of quality TV is, the host needs to show more of her “human” side. She needs to get more in touch with her audience, revitalizing the show’s format with more approachable material and fan involvement. This means relying less on the high-brow content that, although funny, has also put up something of a wall between her and her viewers (especially younger ones). It also requires her to do man-on-the-street bits and other similar material that her late night competitors perform. So, with nothing to lose, Katherine reluctantly gives it a try – and it works, making the biggest splash her show has made in years.

But is it too little too late? That remains to be seen, especially when a scandal surfaces that threatens to undo all of the good work that has helped to renovate the show’s ratings and reputation. Katherine, Molly and crew need to act fast if they’re going to stave off a replacement and an uncertain future. And that’s nothing to laugh about.

When we hit on a formula that works, there’s often a tendency to leave it alone and let it carry on as if it’s got a life of its own. Notions of “letting sleeping dogs lie” and “if it ain’t broke, don’t fix it” readily come to mind. But what if the conditions surrounding that formula start to change and its inventor makes no alterations to keep up with shifting circumstances, insisting that past successes will simply continue on into perpetuity? That could prove to be a problem, one that could even lead to an institution’s demise. One need only look to the experiences of businesses like Blockbuster Video and Borders Books to see what can happen when management rests on its laurels. And the same is true in other areas as well, with broadcast entertainment no exception.

The need to evolve is an essential tenet of survival. It’s also a cornerstone principle of the conscious creation process, the philosophy that maintains we manifest the reality we experience through the power of our thoughts, beliefs and intents. In fact, one of the core concepts that drives it is the idea that everything is in a constant state of becoming, morphing from one form to another in an endless succession of creation, dissolution and reformation. 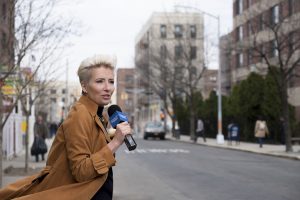 That’s the lesson Katherine wrestles with in “Late Night.” She is heavily bought into the belief that her show will continue to succeed, no matter what, as long as she sticks to her principles. In the process, she’s also become thoroughly convinced that making changes is utterly unnecessary. Quality work, she believes, sells itself, a self-evident notion that everyone can see as plainly as she does.

Or so she thinks.

What Katherine fails to see is that what appeals to the public one day could easily fall out of favor the next. Remember when diners couldn’t get enough of quiche? But how prevalent is it on menus these days? The same can be said for wine coolers and smoking and TV variety shows and a host of other commodities that had their heydays and subsequently dwindled in popularity or vanished altogether. That’s the risk that Ms. Newberry runs if she’s unwilling to change with the times.

To survive, Katherine needs to adjust her beliefs, drawing upon the input of her intellect and intuition to form new intentions that will allow her and her show to survive. And, even if she’s not especially adept at this, that’s what she has a staff for, one made up of collaborators who are attuned to the pulse of society and what it takes to make their product succeed. Indeed, we don’t have to do everything ourselves; that’s why we have the act of co-creation, whereupon we tap into the talents of like minds to jointly produce grand conceptions that are warmly received by their audiences. This is a principle that goes into the creation of virtually any product, be it a deodorant, a snack food or a late night TV talk show.

It also helps when our creations arise from heartfelt intentions. That’s why Molly encourages Katherine to put herself into the show more than she typically has. Sitting behind a desk for all those years has clearly separated the host from her viewers, so, if she wants to revitalize the show, she needs to reconnect with those who helped make her a star, to allow her personal integrity to come forth and infuse the beliefs she holds that go into making the program work. 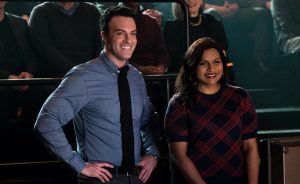 Changes like this can indeed be scary, especially when they seem to go against that aforementioned formula for success. But isn’t losing everything an even scarier prospect? (Most of us would probably think so.) That being the case, if Katherine wants to save her show, she mustn’t be afraid to face her fears and move past them, courageously wiping away whatever apprehensions and personal limitations are impeding her. The effort, though daunting, should prove worth it.

The key in all this is introducing a hefty dose of flexibility into our beliefs. That enables us to see a wider range of possibilities, some of them aimed at introducing minor tweaks and others intended to usher in sweeping and perhaps outrageous change. However, as it’s been said, necessity indeed is the mother of invention, and Katherine certainly has a mother of problem to overcome if she hopes to stay on the air. That’s certainly not out of the question; in fact, given that her work involves entertainment, if anything it should be fun. And who knows, if she sees it that way, it just might turn out like that, too. 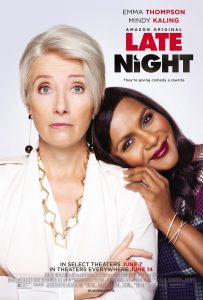 What a treat it is to see a smartly written, intelligent comedy these days, one that isn’t afraid to poke some major holes in the types of vehicles that claim to be funny but truly aren’t. While “Late Night” could use a little more development in certain parts of the back story, and while some elements are a little too predictable, this otherwise-spot-on tale delivers huge, often-scathing laughs and does so without necessarily having to rely only on one-liners. Kaling, Lithgow and (especially) Thompson serve up fine performances in a story that plays like “The Devil Wears Prada” (2006) set in the entertainment world. It also features guest spots from some of the biggest names in TV comedy, including Seth Meyers and Bill Maher. However, make it a point to pay no attention to the trailer for this one – it really doesn’t do the film justice.

Day-old bread may be inexpensive, but how tasty is it? The same can be said of almost anything that’s hung around a little too long without any enhancements or improvements, including what shows up on our television screens. Legendary actor and producer Desi Arnaz realized that, which is why he insisted that his iconic TV series “I Love Lucy” continually go through changes each season to keep the program fresh – and viewers watching. It’s a lesson all of us should take a cue from when it comes to the manifestation of our own creations – especially if we want ʼem coming back for more.