‘The Art of Self-Defense’ warns about the perils of fanaticism

Crossing the line from passion to obsession is a dangerous step. One need only look at the many high-profile examples found in our world these days. But this phenomenon is by no means limited to the events we see on the nightly news; it can crop up anywhere, even in seemingly innocuous places, a troubling subject explored in the edgy new dark comedy, “The Art of Self-Defense.”

Thirty-something office worker Casey Davies (Jesse Eisenberg) could seriously stand to grow a pair. The easily bullied milquetoast cowers in fear about nearly everything, but, considering how often and how readily he’s picked on – by virtually everyone he encounters, from co-workers to coffee house patrons to strangers in parking lots – his reaction is understandable. And what’s worse is that he keeps taking it. But that all changes one night; while walking home after running out to buy dog food for his pet dachshund, he’s mugged by a renegade motorcycle gang, leaving him seriously injured. 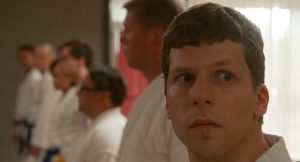 Frequently bullied office worker Casey Davies (Jesse Eisenberg, foreground) decides to learn how to protect himself by enrolling in karate school, a move that gets him more than he bargained for, as seen in the new dark comedy, “The Art of Self-Defense.” Photo courtesy of Bleecker Street.

While recuperating, Casey decides he needs to do something to protect himself. He opts to buy a handgun, but, as he fills out the background check paperwork, he begins having reservations. He leaves the store ambivalent about the idea and goes for a walk, stumbling upon a karate studio. He enters and watches a class in session – and is instantly captivated.

When class is over, Casey approaches the dojo’s ultra-cool Sensei (Alessandro Nivola), expressing a keen interest in learning the ancient art. He professes that he wants to become one of the people who routinely taunt him, a revelation that prompts the Sensei to assertively court the wannabe student. Casey eagerly agrees to enroll, but with no idea of what he’s about to get himself into.

To say more would reveal too much, but suffice it to say that Casey is steadily overwhelmed by his circumstances. While he appears to have quite a knack for karate – a proficiency that empowers the new student and impresses the Sensei – he soon finds himself embroiled in a dark and sinister situation. The uber-masculine, quasi-misogynistic, testosterone-dripping Sensei carries his attitude, practices and instruction more than a little too far, leading the gullible, impressionable Casey down some very questionable paths involving his personal behavior, his professional life and his home life. A macabre and tangled web of deception gradually emerges involving an off-limits equipment room, a female brown belt instructor regularly passed over for advancement to black belt (Imogen Poots) and the aforementioned motorcycle gang. And, as the story unfolds, Casey has a lot more to worry about than just protecting himself from being bullied. 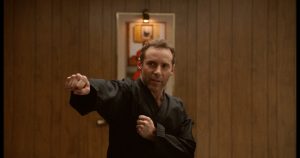 The enigmatic Sensei (Alessandro Nivola) of a karate studio practices more than a few unconventional tactics in the offbeat new dark comedy, “The Art of Self-Defense.” Photo courtesy of Bleecker Street.

Most of us would agree that there’s nothing wrong with being passionate about something, be it a hobby, a sport or some other innocent endeavor. But, when we carry things too far, when we venture into the realm of fanaticism, we could face a number of problems, some potentially serious. That can be compounded, too, if we drag others along with us, spreading the possibility of pain and anguish to unwitting accomplices.

But how do such matters get out of hand? In essence, it comes down to how we view these undertakings and what we come to believe about them. There can be a fine distinction between diversion and obsession. But, in both cases, they’re fueled by the power of the beliefs that underlie them. And that is what ultimately makes things materialize as they do, a consequence of the conscious creation process, the philosophy that maintains we manifest the reality we experience through the power of our thoughts, beliefs and intents.

In a situation like the one portrayed here, one might wonder how a fervent but benign interest in martial arts can transform into something much more menacing. To understand this, we need to look not only at the beliefs driving the interest in karate, but also any associated beliefs related to it – its defining characteristics, its intended purpose, how and why we put it to use, and so forth, the particular traits that come to distinguish how each of us practices the sport and for what reasons. On the surface, it all may just look like karate, but, upon closer examination, we might see one person practicing a competitive activity while someone else is engaged in something clandestine with a frightening agenda. And, when scenarios like the latter one take root, we run the risk of fanaticism taking over. 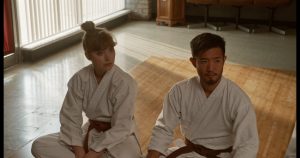 Brown belt karate instructor Anna (Imogen Poots, left) regularly gets passed over for elevation to black belt status, a source of frustration for the accomplished practitioner, as seen in the absurdist dark comedy, “The Art of Self-Defense.” Photo courtesy of Bleecker Street.

As this story plays out, viewers witness the Sensei’s true nature emerge. It becomes apparent that he’s not teaching a noble martial art but, rather, preaching a gospel of intimidating hyper-masculinity, modestly tinged with veiled homoeroticism and an undeniable hostility toward weakness or anything feminine. These ancillary aspects of his own particular brand of instruction are far from the traditional teachings of the ancient masters, yet there they are, firmly rooted in his class sessions, fanatical lessons that he seeks to pass along to his students.

This naturally begs the question, “Why?” In the conscious creation treatise The Individual and the Nature of Mass Events, author Jane Roberts explains that fanaticism often arises from experiences in which an individual believes in a need to make a point while simultaneously attempting to make up for personal failings, frequently by overcompensating in the process. When applying that principle to the Sensei’s efforts at extolling his macho, chauvinistic dogma, it’s not too hard to figure out where the “inspiration” for his current actions may have come from. And the fact that his teachings focus more on punishing one’s enemies rather than practicing self-defense speaks volumes. Whatever experiences he may have had that prompted these beliefs, they were obviously significant enough to establish intents that have become firmly entrenched and are now freely materializing, questionable though they may be.

Given Casey’s personal experiences, it’s not too difficult to imagine how he might be intrigued by the Sensei’s charisma. In many ways, the Sensei is who Casey wants to be – at least initially. However, when he begins to see the Sensei for who he really is, he realizes that he may be dealing with yet another bully, especially as the nefarious nature of his schemes is revealed. How Casey responds to this scenario is his new challenge, and that response will depend on his beliefs. Can he succeed at becoming who he claims he wants to be? 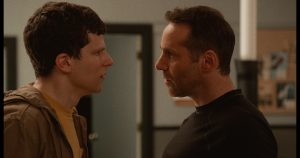 As the relationship between karate student Casey Davies (Jesse Eisenberg, left) and his Sensei (Alessandro Nivola, right) becomes strained, the tension between them grows significantly as seen in “The Art of Self-Defense.” Photo courtesy of Bleecker Street.

Interestingly, while the film focuses on the relationship of the two principals, in many regards the story is a microcosmic metaphor for the wider world. Given the current sociopolitical situation of the nation (some might say the entire world), many of us are being intimidated, or even attacked, by a plethora of bullies. Those doling out the threats and injuries are not unlike the Sensei, a chilling symbol representative of the individuals and institutions who are trying to put us under their thumbs. Will we succumb to the pressure? Or do we believe in ourselves enough to rise to the occasion, even if it means having to take on those who falsely claim they want to help us? That’s a tall order, for sure, but, as Casey discovers for himself, that may be just what we need to do, too. Ironically, he may end up being an unlikely role model not only for himself, but also for the rest of us.

Of course, everything depends on whether we believe we can accomplish our aspirations. That goes for Casey, as well as the rest of us. If we look deeply enough, though, there’s a good chance we’ll find the inner strength and fortitude needed to realize those goals – provided we give them a chance to reveal themselves. Along the way, though, we must also heed the message of this cautionary tale and keep ourselves from employing the same kinds of tactics in taking on the fanaticism that confronts us.

This rivetingly funny but edgy dark comedy, reminiscent of “Fight Club” (1999), is certain to make viewers both laugh – and squirm – in their seats. Eisenberg and Nivola are perfect foils for one another, each turning in fine performances in which they serve up ample helpings of neuroticism and creepiness in their respective roles, an intriguing combination that never disappoints. The picture’s extensive use of deadpan humor evokes frequent unexpected laughs, getting plenty of mileage out of intrinsically absurd situations and not having to rely on one-liners alone. The film admittedly has a few plot holes and requires leaps in believability along the way, but they also add to the somewhat surreal quality of this satire, which doubles as both an intriguing story of its own and a less-than-veiled social-political commentary. Director Riley Stearns’s second feature offering is definitely one of the funniest, strangest and most decidedly twisted offerings of the year. 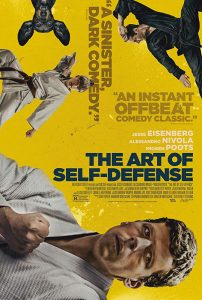 No one likes bullies, but, in facing them down, we must be careful not to inadvertently become who we oppose. This calls upon us to take a good, hard look at the beliefs – all of them – that play a role in a venture like this. We don’t want to fall prey to that which we detest. That calls for us to get creative in our approaches to addressing these matters, using whatever we have at our disposal, including in unheard-of ways, forms of self-defense that truly are an art.