‘Luce’ ventures into the search for truth

What is truth? That’s a question scholars, philosophers and theologians have wrestled with for eons. But, after all these many centuries, it still lingers, nibbled at by many deep thinkers though never satisfactorily answered. Perhaps that’s because it can’t be adequately nailed down, be it due to an undefinable or transitory nature, a plethora of conflicting opinions, or some other inscrutable quality. For what it’s worth, however, the quest continues, this time on the stage of a highly charged contemporary drama as seen in the gripping new release, “Luce.”

If ever there were a textbook example of an “honor student,” Luce Edgar (Kelvin Harrison Jr.) would be it. The Eritrean-born onetime-child soldier whose first name means “light” was adopted by his upper middle class parents, Amy (Naomi Watts), a pediatrician, and Peter (Tim Roth), a financier. With no children of their own, Amy and Peter wanted to use their considerable resources to give a fighting chance to someone who might not otherwise get one. Together they put everything they had into raising the African orphan, who has grown up to be a stellar high school senior, expert debater, star track athlete and fiercely loyal friend. 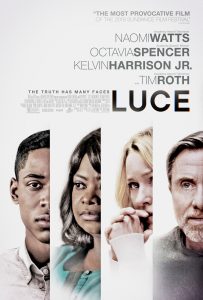 With a pedigree like that, Luce seems well on his way to a bright future, one aptly befitting of his name. But one day, quite unexpectedly, a bombshell goes off. Amy is called to Luce’s school to confer with his history teacher, Harriett Wilson (Octavia Spencer), who shares some troubling news. Miss Wilson is concerned about Luce’s work on a classroom essay assignment in which he and his fellow students were tasked with writing a paper in the first-person voice of a historic figure. For his composition, Luce chose to pen a manifesto by Frantz Fanon, a radical Black revolutionary who advocated violence as the only means to achieve political reform. The incendiary paper was filled with disturbing, inflammatory rhetoric, so much so that it shocked the project’s assignor. And, to see if there was more to this than just his provocative prose, Miss Wilson had Luce’s locker searched, an investigation that uncovered the presence of illegal fireworks, an amount capable of setting off a sizable explosion.

Needless to say, Amy can’t believe what she’s hearing. Given her son’s impeccable reputation, how could he possibly be caught up in something like this? She’s upset about the invasion of her son’s privacy, and she seriously doubts Miss Wilson’s accusations, citing the nature of the assignment to explain its content. She leaves the conference highly skeptical. However, just in case there might be something to the teacher’s claims, she decides to get to the bottom of things with Luce but without directly confronting him with the alleged evidence. She refuses to level the same unsubstantiated charges against him without fully getting his side of the story. 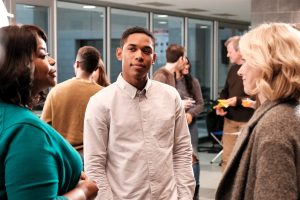 In questioning Luce, however, Amy finds her son to be somewhat evasive. He admits his relationship with Miss Wilson is frequently strained, given that she often seems to have it in for him. He notes that she’s highly judgmental with limited views of what she considers acceptable behavior, particularly for minority students, such as Luce’s classmates DeShaun Meeks (Astro) and Stephanie Kim (Andrea Bang). And that’s ironic, given that Miss Wilson comes from a minority background herself. That aside, though, the lack of definitive answers leaves Amy with doubts, something she didn’t expect to happen. Yet, considering her love for her son and the implicit trust she has long placed in him, she tends to give him the benefit of the doubt, even though she can’t ignore the onset of vacillation that seems to be creeping into her feelings.

To say more would reveal too much, but suffice it to say that matters grow progressively more complicated when a variety of other issues arise. An incident with Miss Wilson’s drug-addicted sister, Rosemary (Marsha Stephanie Blake), an internal investigation led by the school’s principal, Dan Towson (Norbert Leo Butz), a home break-in, accusations of possible sexual assault, and an incident involving the aforementioned fireworks take the situation to whole new level. And, with so much on the line, none of these events brings anyone closer to the truth – if there even is such a thing as a solitary truth.

Yet getting to the truth is what most everyone wants, no matter how elusive it might be. But, if that’s truly the case, why is it so hard to pin down? That’s because truth is often relative, based more on perceptions, perspectives and beliefs and less on objective criteria that go unquestioned. That lack of absolute certainty probably makes many of us quietly uncomfortable, but perceptions, perspectives and beliefs are by their nature variable from one person to another. And, given the role they play in the manifestation of our individual realities, their impact is formidable. In fact, they’re at the core of the conscious creation process, the philosophy that maintains these metaphysical building blocks are responsible for shaping the existence we experience. 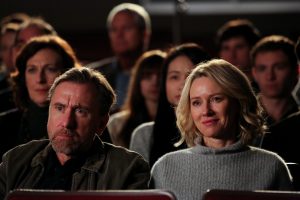 When those principles are applied to the scenario at work in this film, it’s easy to see how multiple versions of “the truth” emerge. The view each character holds about Luce determines how they each see him. And this doesn’t even take into account the perspective he holds about himself. What’s more, as new revelations continually arise, the sands underlying these perceptions tend to shift, making apparent that “the truth” can readily change over time with changing circumstances.

To many of us, this probably seems obvious. However, this is a reaction coming from an outside perspective. When we find ourselves embroiled in situations like the one depicted here, we may lose that objective outlook; instead, we tap into our own subjective views but somehow convince ourselves that they must be taken as gospel, intrinsically inviolable truths. Such circumstances thus demonstrate the power of beliefs and how we can imbue them with an unshakable certainty, despite the fact that they are readily alterable, even if we’d rather not see them as such. Indeed, if we draw upon these resources to create the reality we experience, they’re going to vary from individual to individual, a condition that accounts for differences in outcomes.

It’s also worth bearing in mind that things seldom arise as all or nothing scenarios. The proverbial “black and white” situations tend not to emerge as readily as we think they do; those murky in-between shades of gray are often more prevalent, and it’s those hues that we should look at most closely. Yet, for what it’s worth, that’s not the case in this story. As Luce himself pleadingly protests when the heat gets turned up, “I only get to be a saint or a monster.” Is he either of those, an upstanding citizen or a sociopath? Or is he more accurately characterized as something in between? 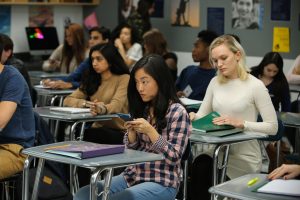 Asian-American high schooler Stephanie Kim (Andrea Bang, center) is upset that her history teacher holds her to a different standard of accountability compared to non-minority students as seen in the stunning new drama, “Luce.” Photo courtesy of Neon.

This is an important point to bear in mind in today’s culture. Given the polarization seen in contemporary society, it might be easy to fall prey to beliefs that occupy opposite ends of the spectrum. That’s particularly true when it comes to an issue like race, a question that comes front and center in this story. Is it fair, for example, for Miss Wilson to hold minority students to a higher standard of accountability? Is she purposely being hard on them to help prepare them for the challenges they’re likely to face in an often-unfair and imperfect world? Or could it be that she’s projecting personal resentment onto them based on the experiences she underwent as she was attempting to stake her place in the world? The answers to these questions aren’t easy, but they’re almost assuredly based on the underlying beliefs on which they rest.

This riveting psychological thriller is filled with endless twists and turns that leave audiences guessing right up until the very end. What’s more important, though, is that the film forces us to face some thorny questions about race, redemption, privacy, trust, perception and prejudice, all the while showing us that things may not be as simple or clear cut as they seem. The picture’s superb script by playwright J.C. Lee and director Julius Onah, its fine film editing, and its excellent ensemble cast (most notably Spencer, Watts and Harrison) make for one of the best offerings of 2019, a release that sincerely deserves serious consideration come awards season. It already earned a Grand Jury Prize nomination in the dramatic category at the Sundance Film Festival earlier this year. 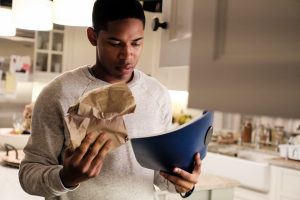 Is he a saint or a sociopath? That’s one of many thorny questions viewers must ask themselves when it comes to high school honor student Luce Edgar (Kelvin Harrison Jr.) as seen in the gripping new drama, “Luce.” Photo courtesy of Neon.

No matter how earnestly we search, truth may be something that ever eludes us. The answers we come up with may be incomplete, unsatisfactory or even totally off-base. As this story illustrates, the quest may even leave us with more questions than we had at the outset of our inquiries. The important thing, though, is that we never stop searching, for we grow with each step we take along the way, and there’s no telling where that may end up taking us.