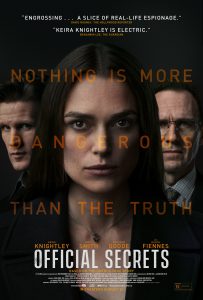 It’s been said that one of the most valuable currencies we possess is our personal integrity. It’s a measure of who we are as individuals, of how genuine we are with ourselves and with others. It’s important for how authentically we each interact with our world. Now imagine this principle applied on a national scale or even on the scale of an international alliance. It speaks volumes about a people and its leadership in its dealings with those outside its borders or territories. But what happens when that collective integrity gets called into question? The authenticity and honor of an entire country (or group of countries) could thus become suspect. It’s that sort of scenario that provides the backdrop for the chilling new fact-based biopic, “Official Secrets.”

In 2003, British intelligence specialist Katharine Gun (Keira Knightley) became an unexpected and unlikely player on the world’s geopolitical stage. As an employee of GCHQ, the United Kingdom’s Government Communications Headquarters, Gun routinely processed and translated classified information filtered through the agency, a position that, despite its high-level intelligence sensitivity, she initially saw as “just a job.” However, in the run-up to the Iraq War, as a concerned citizen, she became troubled over the country’s obviously forced efforts to make a case for the conflict. She became incensed watching the rhetorical drum-beating being stirred up in daily media reports featuring U.K. Prime Minister Tony Blair and U.S. President George W. Bush. 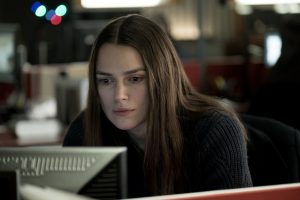 Surprisingly, Gun’s reaction came across as somewhat out of character. Having never been overly politically active, her interest in this issue seemed uncharacteristically disproportionate. Such vehemence even became something of a cause for concern for her husband, Yasar (Adam Bakri), a Turkish Kurd who was applying for U.K. residency at the time. But this was nothing compared to what was to follow.

While at work one day, Gun came across a memo written by the chief of staff at the “regional targets” division of the National Security Agency, the super-secret American intelligence organization. The memo stated that the U.S. was enlisting Britain’s help in collecting compromising information on wavering United Nations Security Council members to blackmail them into voting in favor of an invasion of Iraq. Outraged, Gun could not stand by and watch the world rushed into an illegal war that would result in countless numbers of fatalities and injuries on both sides of the conflict.

The revelation of this initiative was enough for Gun to take action. But doing so involved taking a tremendous chance: As a GCHQ staffer, she swore an oath to defend the U.K.’s Official Secrets Act, a law designed to prevent the disclosure of highly sensitive information, one with severe penalties for violations. The law even placed stringent requirements on suspected violators when it came to sharing disclosed information with their attorneys, potentially compounding the charges that could be leveled and making a viable defense difficult. However, even with those possible consequences, Gun decided to move ahead, believing that she could cover her tracks well enough to keep her from being traced. She thus funneled a copy of the memo to contacts in the antiwar movement, who, in turn, shared it with reporter Martin Bright (Matt Smith) of the London-based newspaper The Observer. 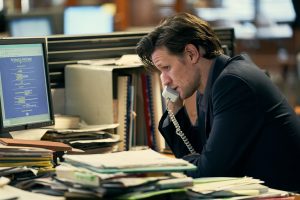 Making a case for this story with The Observer was challenging, given its stated support for the war. But, after verifying the validity of the information with colleagues Ed Vulliamy (Rhys Ifans) and Peter Beaumont (Matthew Goode), Bright proceeded to report on the memo with the paper’s blessing. The revelation became a blockbuster story, despite official claims that the memo in question was a fake, a propagandist ploy created by antiwar advocates. Nevertheless, The Observer stood by its story as the U.S. and the U.K. attempted to force the hand of the U.N. Security Council and take the world to war.

With such an embarrassing story now circulating publicly, the British government in general and the GCHQ in particular aggressively sought to discover the source of the leak. A concerted investigation within Gun’s division began, one that led to the scrutiny of all of its employees. As staff members were grilled by management and investigators, Gun could not stand by and watch her colleagues take the heat for what she did. She decided to confess, an act that began a nightmare of harassment that impinged upon all areas of her life – firing, criminal charges, prison time and the possible deportation of her husband.

Gun took a tremendous risk in doing what she did. But, given the soft public sentiment about the war, she was not without sympathizers, particularly in the legal arena. With the aid of attorney Ben Emmerson (Ralph Fiennes) and his colleagues, Gun began planning a novel legal defense, one that contended the U.K. had engaged in an illegal war, a claim that, if successful, could exonerate her of the Official Secrets Act violations leveled against her. It was an effort that involved further investigation by Bright and his associates, as well as veiled admissions by government officials who could no longer condone the directives of their higher-ups. What came from it was stunning, but it’s amazing what integrity can compel when it’s put to the test. 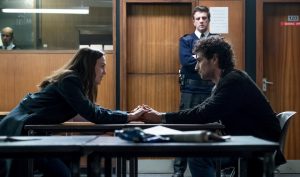 In an age when integrity seems like it’s in increasingly short supply, Gun’s story shows us just how important it is – and how perilous our circumstances can become when it’s carelessly disregarded. That’s especially true when it comes to the fulfillment of the questionable agendas of a few with little or no regard for the majority that could be adversely affected. Integrity is thus an essential element to the formation of our beliefs and, subsequently, to the functioning of the conscious creation process, the philosophy than maintains we draw upon these metaphysical building blocks for the manifestation of the reality we experience. Indeed, without it, we can all too easily see what we get.

Voluntarily stepping up to play the role of whistleblower is often difficult, even under modest circumstances. So, in a situation where the stakes are as high as they are here, it takes an acutely clear sense of one’s integrity to approach the plate. And that, in turn, calls for a willingness to overcome our fears and live heroically. That was certainly the case where Gun was concerned, as she was ready to risk it all for a principle. 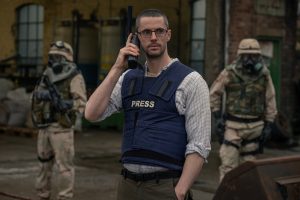 It would be ideal if a nation and its leadership could have the clarity of mind to see this and to implement policies and practices in line with such thinking without prompting or coercion. But, when agendas become compromised by ancillary considerations that cause a people to lose their way, conditions need to be brought back into line by those who possess the integrity, courage and wherewithal to see the truth come shining through. Gun set quite the example in that regard, and we should be grateful for her efforts.

The irony here is that, in many ways, Gun seemed an unlikely candidate for taking on such a challenge. By her own admission, she initially didn’t even view her position as anything more than just a job. But, when the ugly truth became revealed, she could not turn a blind eye. She needed to live her own truth, even if it didn’t seem like it was in line with her typical self. Her beliefs and actions thus launched her in an entirely new direction in her life, one reflective of her destiny and value fulfillment, the conscious creation principle associated with becoming our best, truest selves for the betterment of ourselves and those around us. And, if that’s not the ultimate expression of integrity, I don’t know what is. 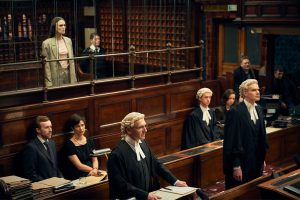 This somewhat rote but nevertheless compelling biopic tells the inspiring story of someone who was willing to put it all on the line for an idea. It’s a story not especially well known outside the U.K. (for reasons that become apparent in the film), yet it’s one with a message that we should all take to heart, a cautionary tale for those who might be a little too willing to dismiss it. Knightley delivers a knock-out, award-worthy performance as the unlikely heroine, backed by a superb supporting cast and the fine direction of filmmaker Gavin Hood. Regrettably, like the story it’s based on, “Official Secrets” hasn’t received much attention, but it’s definitely a worthwhile view.

Being true to ourselves isn’t always easy. Owning up to actions, policies and practices that don’t fit with what we claim to be the case takes a certain kind of courage and a willingness to admit the truth, no matter how unflattering, distasteful or hypocritical it might be. But, if we’re to live with ourselves, we must follow through with this, because, if we don’t, the consequences could end up being far worse than anything we might imagine, the kind of fallout that makes a little embarrassment pale by comparison.