Skip to content
Home/Conscious Creation, Drama, Movie Reviews/‘Joker’ gives us much to contemplate

‘Joker’ gives us much to contemplate

It’s a rare feat when a film covers so much ground that it gives us a lot to take in and assess. In doing so, such stories may well make us feel more than a little uncomfortable (and rightfully so) as they prompt us to take a hard look at what we’re experiencing and how it came about. They may even push us toward taking action at changing what’s going on, even if they make us squirm a bit as we move toward such a decision. So it is with the controversial new fantasy tale, “Joker.”

Arthur Fleck (Joaquin Phoenix) has his share of issues. The psychologically challenged Gotham City resident struggles to hold it together with the aid of a cocktail of prescription meds and the regular, but largely indifferent, counseling of a public aid social worker (Sharon Washington). He ekes out a living as a special event clown, working jobs like retail clearance sales and visits to pediatric hospitals, where he shows off his distinctive cackle and fancy footwork. And, when he’s not engaged with the foregoing, he spends his time caring for his aging live-in mother, Penny (Frances Conroy), who has mental and physical challenges of her own.

For all intents and purposes, Arthur leads a pretty bleak existence. He and Penny live in a rundown apartment building in a marginal neighborhood, one that epitomizes everything that’s wrong with Gotham City. But, if that weren’t enough, Arthur is repeatedly harassed by strangers who assault him or steal his property, particularly when he’s dressed up in his clown outfit. He attempts to fight back, but he’s often hassled by packs of thugs, making it difficult to defend himself. It’s a wonder how he’s able to cope. 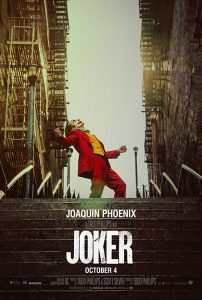 However, despite all these travails, Arthur manages to hold out hope for a better life. Having long been told by his mother that his purpose in life was to spread joy to others, Arthur aspires to become a stand-up comedian, perhaps even getting booked on a late night TV talk show hosted by an entertainer he greatly admires, Murray Franklin (Robert De Niro). And the first step toward that goal comes when Arthur gets a chance to try out his act at a local comedy club. Things could be looking up.

What’s more, Arthur has hopes for becoming involved in a meaningful relationship. He’s particularly attracted to his neighbor, Sophie Dumond (Zazie Beetz), a young single mother who seems to be on the same wavelength as him. And, when he believes she’s showing him some interest, he’s even more enthused.

But no sooner do Arthur’s hopes get raised when reality comes crashing down. He’s left to contend with the ongoing difficulties of his circumstances, as well as those of his mother, who often slips into bouts of delusion. For instance, she’s perplexed that she doesn’t receive responses to the many requests for help that she sends to Thomas Wayne (Brett Cullen), one of Gotham’s wealthiest residents and a recently announced mayoral candidate for whom she once worked. Arthur tries to explain to her that it’s unlikely she’ll hear from him, given that Mr. Wayne employed her only briefly many years ago and that he probably doesn’t remember her, despite the fervent hope she’ll hear from him. It’s truly sad.

Just when it seems things couldn’t get any worse, though, circumstances deteriorate even further. Arthur learns that his public aid support is being cut. Then he loses his job and suffers another attack while on his way home, this time at the hands of a trio of obnoxious Wall Street types (Carl Lundstedt, Michael Benz, Ben Warheit) with tragic consequences. He then learns a shocking secret that his mother has been harboring, a revelation that immediately precedes her hospitalization for a stroke. And, to top it off, he sees video footage of his comedy club performance on Murray’s show, presented in an insensitive and unflattering light.

In the meantime, conditions in Gotham begin spiraling out of control, especially where unchecked street crime and the increasingly inflammatory mayoral race is concerned. Criticism against candidate Wayne is running hot and heavy, especially in connection with comments he’s made about Gotham residents disdainful of the city’s wealthy elite. Having referred to these oppressed, largely working class individuals as “clowns,” Wayne’s detractors respond by embracing the derogatory label plastered on them. Masses of citizens wearing clown masks and outfits mobilize to protest the disempowerment and injustice they feel, spreading chaos far and wide.

By this point, Arthur is at wit’s end. He’s had as much as he can handle. He decides that it’s time to retaliate, especially now that he has a pair of detectives (Shea Whigham, Bill Camp) following him, too. And, with conditions being what they are, he’s inspired to take what he considers to be appropriate measures in response. But, considering how Arthur sees the world, those responses are unlikely to be of the kind expected in a civil society. With the clown phenomenon sweeping the city, Arthur, as one of the movement’s ironic predecessors, joins the fray, assuming the persona “Joker,” one that he believes reflects his emerging mindset – and one that will prove macabrely fitting as he seeks retribution against all of those whom he believes have wronged him.

So what’s one to make of all this? “Joker” is the kind of film that draws a variety of responses, depending on one’s own interpretation. Those interpretations are governed by the beliefs we hold, the cornerstones of the conscious creation process, the philosophy that maintains we draw upon these metaphysical building blocks in manifesting the reality we experience. This is a principle that applies quite broadly, too, both for real world audiences and the characters chiseling out the story on the screen.

“Joker” offers us a prime example of how our existence reflects our beliefs, again, both for viewers and Gotham’s residents. For instance, it’s more than a little obvious that the circumstances that define the characters and setting of the picture’s narrative are a mirror of present-day conditions off the screen, a result from the story’s (and prevailing conditions’) ultimate creators – us. We feel connected to those in the film, because they mirror what many of us believe about our world these days. This thus creates a link between what we’re feeling and what we’re watching, an uncanny parallel that may evoke reactions that feel like they hit more than a little too close to home.

The frustration that Arthur feels reminds many of us of the exasperation we feel with regard to many of today’s ills – ineffectual, self-serving politicians, indifferent, money-grabbing corporations, rampant violent crime, and insensitivity toward those with special needs, to name a few. And the more he adheres to those beliefs, the more pervasive these conditions become. However, if he ever hopes for anything better, he must change his beliefs, taking them in other directions – something that we must do as well if we hope for new circumstances to become established in our reality. Instead, however, Arthur relishes these conditions, embracing them more than ever as his story plays out – a potent cautionary tale for us, too, if we ever hope for our conditions to change.

Even though Arthur and his followers seek to redress what they’re experiencing, they fight back using means comparable to what they claim to detest. In essence, they perpetuate the prevailing conditions, only with them at the helm, by employing like beliefs in combatting what they supposedly consider unacceptable. His behavior calls to mind such cinematic antiheroes as Travis Bickle (Robert De Niro) from “Taxi Driver” (1976), Rupert Pupkin (Robert De Niro) from “The King of Comedy” (1982) and D-Fens (Michael Douglas) from “Falling Down” (1993). There’s quite an irony in that as the oppressed seek to become the oppressors. And it’s not an answer for those who hope for their situations to change, again, something viewers should ponder as they seek to do the same in their reality.

This scenario arises in various segments of society. For instance, the film makes quite a statement when it comes to its view of how Gotham (and, by extension, the real world) treats the mentally ill. The unfeeling, uncaring attitude that pervades the handling of these individuals speaks volumes about the beliefs driving such treatment. Is it any wonder, then, that those impacted in this way would eventually act out in an effort to get what they require to cover their basic needs?

Likewise, a similar case can be made for the nonconformists of society. Early on in the story, for instance, Arthur routinely suffers abuse at the hands of those who see him in his clown outfit, labeling him some kind of “freak,” even though he’s just wearing the garb needed to do his job. That sort of intolerance is prevalent in Gotham, and it increasingly rings bells about how many of us in our society are treated these days. It’s yet another warning to us about how we handle ourselves – and others.

At bottom in all of these situations is a failure to consider alternatives, to look for new beliefs aimed at rectifying what we’ve mishandled in our creative efforts. Instead of examining ways to set things to right, we sink deeper and deeper into the morass of beliefs that spawned the mess we’re in, creating an ever-deepening hole that becomes increasingly difficult for us to extract ourselves from. That’s a bleak prospect, one that bolsters the dark nature of this film – and a view of our off-screen world that’s unfortunately becoming far too entrenched.

In tackling the foregoing, “Joker” takes on quite a formidable task, and it’s to be lauded for its attempt to nudge movies in the comic book genre in an entirely new direction. And, in doing so, it gets many aspects right, such as its excellent, 1970s-style production design and the mostly solid (though occasionally hammy) performance by Joaquin Phoenix. It also sends a clear warning to us about ourselves, albeit one that’s both cautionary and potentially incendiary at the same time.

Yet, despite these strengths, the picture has its share of problems as well. Uneven pacing, mishandled back story revelations, heavy-handed sociopolitical allegories, excessive narrative elements, violence bordering on gratuitous and plot holes aplenty all conspire to weaken an otherwise-ambitious production. What’s more, at the risk of playing spoiler, the film features an ending that’s out of place compared to the apparent climax that preceded it. And then there are derivative elements taken almost verbatim from a variety of other pictures, including the aforementioned “Taxi Driver,” “The King of Comedy” and “Falling Down,” as well as “Network” (1976) and others. What this movie gets right is indeed impressive, but, unfortunately, there’s not enough of that compared the package overall. In this case, the glass truly is half empty.

Given the breadth of territory that “Joker” seeks to cover, it’s undoubtedly one of those pictures that’s creating considerable conversation and on a multitude of fronts. In that regard, it could be doing us all a favor by prompting discussion of conditions that we’ve been all too willing to disregard. The 800-pound gorilla in our reality has indeed been identified and exposed. But will we take advantage of this opportunity to bring about meaningful change? Or will we descend even further into the mess we’ve created, giving us “inspiration” to further justify unacceptable behavior and perpetuate ineffectual attitudes? There’s a lot of food for thought in that. So get ready to grab your fork – and dig in.