‘Ordinary Love’ proves there’s nothing ordinary about it

“Love” is a word we often bandy about rather casually without really giving much thought to what’s behind it. That can be unfortunate, since such a practice frequently sells it short, giving us a diminished perspective on what it actually can do. Fortunately, there are tales out there that shed a bright light on the subject, showing us what it can achieve when employed skillfully and deliberately. So it is with the new touching romantic drama, “Ordinary Love.”

Middle-aged couple Tom (Liam Neeson) and Joan (Lesley Manville) have been happily married for a long time. Through the years, the couple from the suburbs of Belfast, Northern Ireland has shared many joys, as well as some sorrows, such as the tragic death of their only child, Debbie. But, much of the time, they’ve happily gone about their everyday lives with a mixture of reliable routines, playful banter and undeniable love, the kind that has fostered a strong relationship and enabled them to weather the storms of their lives. They’ve indeed built quite a satisfying life together.

Which is why it’s so disturbing when events arise that threaten to take away that happiness. While conducting a routine breast screening exam, Joan discovers an abnormality. And, when she subsequently consults her physician (Esh Alladi) and a specialist (Melanie Clark Pullen) about the matter, she’s diagnosed with cancer. The safe, secure, generally ordeal-free life they’ve built together suddenly seems perilously in danger. 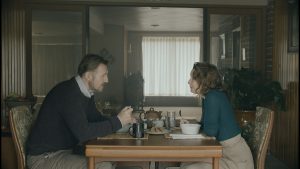 With a prognosis that’s neither completely optimistic nor totally damning, and with her life at stake, Joan goes forward with her treatment program, which begins with surgery followed by chemotherapy. She endeavors to remain upbeat, but the difficulties she endures – post-surgical pain, as well as all of the side effects of chemo treatment (hair loss, incessant nausea, etc.) – take their toll on her. And, before long, they begin to take their toll on their relationship, too.

Tom wrestles with wanting to help, even though there is little he can do other than offer comfort and support. And, no matter how compassionate and reassuring he tries to be, he can never really fully appreciate what Joan is going through. She tries to spare his feelings and show gratitude for his attempts at easing her burden, yet she also knows that his well-meaning efforts are ultimately inadequate for her particular needs. In many ways, she feels alone, with no one – not even Tom – being fully able to understand what she’s undergoing.

At the same time, Tom feels alone, too. He experiences feelings of being shut out, upset that he’s seen as not being up to the task of providing adequate care (if there even is something such as that under circumstances as trying as these). He’s also frightened of the prospect of being alone permanently; with his daughter deceased and his wife’s future uncertain, he faces the very real possibility of being by himself. 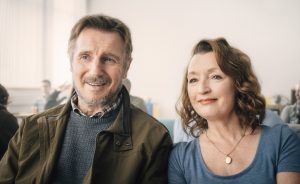 As Joan moves through her personal odyssey, she at last meets someone to whom she can relate, Peter (David Wilmot), a fellow cancer patient who was once one of Debbie’s school teachers. Spending time in the company of a kindred spirit gives her comfort, support and hope, especially now that she has an opportunity to share her thoughts with somebody who can fully relate to what she’s going through. Their conversations not only allow her talk about the particulars of her illness, but they also provide her with a sounding board to talk about her relationship, especially given that Peter is experiencing similar challenges with his partner, Steve (Amit Shah). And, with Peter’s health failing fast, these circumstances also give Joan pause to contemplate her own fate, to get her own thoughts in order in the face of an uncertain future.

Even with such difficulties, though, Tom and Joan nevertheless have their undying love for one another to help them get through this ordeal. While there may be times when their love is tested or when they may lose sight of it, it’s always present and available in ample supply, and they can always tap into it when the need arises. It proves to be quite the rock on which to rest their burdens and give them stability when needed. But, most of all, it provides them hope for what lies ahead, the kind of solace they can use in times like this, both for themselves and one another.

How we view our circumstances – and what we foresee for our future – may not be easy propositions to address. But, in the end, they always come down to a matter of our beliefs – what do we think about where we are and where we’re going? Is our situation something we can handle? Or is it something that we view as being beyond us, out of our control? In any case, it comes down to what we believe, and that’s important to remember, for our beliefs serve to shape our reality through the conscious creation process, the philosophy that maintains we draw upon them for this purpose.

“Ordinary Love” presents the story of ordinary people facing extraordinary circumstances, the big cosmic questions mankind has wrestled with throughout eternity. That may not seem so unusual, since all of us will face these issues for ourselves at some point. Nevertheless, that certainty doesn’t make the process any easier, especially for those who may have never given these questions much thought in the course of their everyday lives. That’s the challenge Tom and Joan are staring down now.

To be sure, they did face a crisis not unlike this with the death of their daughter. But, when the question looks at us squarely in the face, the impact is felt that much more strongly. And now the happily married couple – particularly Joan – must do so for themselves. So what are they going to do?

Given Joan’s prognosis, this is a scenario where it seems that “hope for the best but prepare for the worst” would likely seem most advisable. It’s an approach infused with optimism and realism at the same time, a practical outlook that gives hope but doesn’t falsely rely on wishful thinking. It requires walking a belief tightrope, one that may not be easy to traverse. But it does help to make the best of a troubling and trying situation.

Of course, one might ask why someone would create such circumstances in the first place. If it’s so awful, why manifest it? Those are indeed good questions, but it’s not our place to question the creator’s reasons; there may well be life lessons that Tom and Joan need to get that they can only learn through adversity like this. Despite its trying effects, serious illness can often be a great teacher, especially when it comes to those aforementioned big cosmic questions of life. Going through an ordeal like this often provides us with new insights into existence and the human condition, things that we might not be able to learn and appreciate in the course of a mundane ordinary routine.

In many respects, this is where the belief in hope seriously comes into play. It gives us the strength to carry on, to move forward into the abyss of difficulty and to stay the course as we work our way through these travails. It’s often aided significantly by a belief in faith, a powerful motivator that assures us whatever we endure will serve our greater good. And, when combined with hope, this belief duo makes for a powerful tool in the face of hardship.

Perhaps the strongest belief to possess in a situation like this is one’s belief in the power of love, especially when it’s employed in a co-created context, as it is here. When we make use of it on an individual basis, it can be a powerful force for our benefit and well-being. But, when it’s amplified through a joint initiative, its impact can be tremendous, especially when focused on a mutually sought-after goal. Despite their occasional disagreements, Tom and Joan are largely on the same page in this undertaking, and with their shared beliefs working in tandem, there’s no telling what they might be able to achieve. 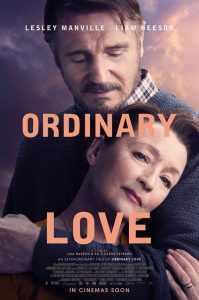 “Ordinary Love” may seem a somewhat odd choice for a Valentine’s Day release, but, for a holiday all about love, it’s hard to imagine a more fitting offering when it comes to a film aimed at examining the profound depths of this subject. Directors Lisa Barrows D’Sa and Glenn Leyburn present a moving, exceedingly touching experience much in the style of filmmaker Mike Leigh, one that evokes genuine, heartfelt emotions throughout. This sensitive, highly personal look at what a cancer diagnosis does shows just how affecting the impact can be on anyone, but especially to a longtime married couple. It’s a fairly simple, straightforward story, one that’s been done a number of times before, but it presents the narrative in exacting detail yet with an extraordinarily everyday approach, one that illustrates how life goes on (or attempts to go on) even in the face of exceptional (and burdensome) circumstances. The picture’s excellent award-worthy performances by Neeson and, especially, Manville, along with simple but effective cinematography, a meticulous production design and a suitably fitting soundtrack, elevate a familiar narrative to an entirely new level of frankness and viewer intimacy.

When circumstances look bleak, we’re indeed fortunate to have love to fall back on. It offers us hope, comfort and support in the face of dire conditions, even when they seem irreconcilable. It shepherds us through our difficulties and leads us to a place of consolation, perhaps even a deeper understanding of ourselves and our existence. But, above all, it can work miracles, even in the most demanding situations. That’s quite an accomplishment for a little four-letter word – but one that embodies remarkable qualities beyond measure.