Skip to content
Home/Comedy, Conscious Creation, Drama, Movie Reviews/‘The Truth’ urges us to remove the drama from the stage of life

Drama may have a place in life, but some of us have trouble determining the stage on which it’s most appropriate. Theaters and movie screens are certainly acceptable venues, but, when drama makes its presence felt on the stage of life, it may well have overstepped its bounds. That’s particularly true when it intrudes upon personal relationships, a place where its appearance may be unwanted, if not unhealthy. Such is the case in the long-tense dealings between an aging mother and her adult daughter in director Hirokazu Kore-eda’s new domestic comedy-drama, “The Truth” (“le Verità”).

Being a big screen diva is so demanding. It requires one to be constantly “on,” ever spinning the right impression to maintain that mystique but never revealing anything that could expose an unflattering image. Just ask Fabienne Dangeville (Catherine Deneuve), a 70-something award-winning grand dame of French cinema whose career is winding down but who honestly believes she’s still a big deal. And, to prove she’s still relevant, she’s just released a memoir called The Truth, a glowing treatise wrapped up in a neat, tidy package designed to portray her as being just as grand and gracious in her off-screen life as in any of her movie roles. She’s also recently accepted a supporting part in an upcoming science fiction drama in which she plays the aging daughter of a mother (Manon Clavel) who never ages and holds on to her eternal youth, a character who, coincidentally, embodies Fabienne’s view of herself.

To celebrate these developments, Fabienne receives a visit from her daughter, Lumir (Juliette Binoche), a screenwriter living in New York with her husband, Hank (Ethan Hawke), a mediocre TV actor who’s managed to attain some success now that he’s come out of rehab, and her plucky 8-year-old daughter, Charlotte (Clémentine Grenier). Mother Fabienne and daughter Lumir haven’t been especially close for a long time, largely because Madame Diva was too busy with herself to devote much time to her young one while she was growing up, often shuffling Lumir off with Sarah, a “friend” (and acting rival) who filled the role of maternal surrogate. Lumir grew fond of her caretaker, and resentful of the way her mother treated her, especially when the woman she supposedly considered a good friend died. But, lingering bitterness aside, Lumir attempts to approach her visit with as cheerful an attitude as possible. 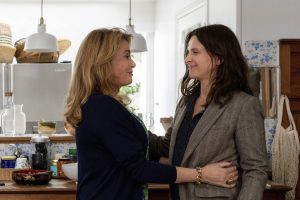 Of course, sweetness soon turns sour when Lumir begins reading excerpts from The Truth. Barbs start flying when she comments on some of the outright lies that her mother packed into the book, such as the joy she supposedly received when picking up Lumir from school every day, something she never did, a task left in Sarah’s hands. And, when Lumir confronts Fabienne about these falsehoods, mother dearest casually dismisses them, ironically contending that telling “the truth” isn’t interesting enough for her fans and readers.

As Lumir’s temper simmers, Hank does his best to help keep calm in the family, as do others on hand, such as Fabienne’s lover, Jacques (Christian Crahay), Mme. Dangeville’s often-beleaguered handler, Luc (Alain Libolt), and the diva’s ex-husband (and Lumir’s father), Pierre (Roger Van Hool), who shows up out of the blue. They try to keep the peace under increasingly trying circumstances, recurring bouts of bickering and Fabienne’s signature flippant behavior, which doesn’t stop just because her daughter has come for a visit.

When these domestic incidents aren’t going on, Fabienne is chauffeured back and forth between home and the movie set. But, as filming progresses, Fabienne finds herself growing progressively anguished and uncomfortable. That’s because, although the movie she’s making has a sci-fi premise, its narrative is uncharacteristically sophisticated for this genre in that it’s also an intense mother-daughter drama. And, as the daughter character in this production, Fabienne starts to gain insights into her real-life daughter’s feelings – probably for the very first time. Through her portrayal of a child of an often-absent mother, Fabienne at last begins to appreciate much of what Lumir endured during her upbringing, an unsettling eye-opener. She begins to see how old hurts can linger on into adulthood, well past the time when many might contend that they should be forgotten and overcome. 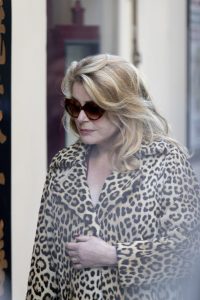 On her way to work, award-winning film actress Fabienne Dangeville (Catherine Deneuve) readies to play a role that comes uncomfortably close to paralleling her off-screen life in “The Truth” (“le Verità”). Photo courtesy of IFC Films.

Meanwhile, as Lumir stews over what she sees as her mother’s continuing lack of care and concern, she learns through conversations with Fabienne’s familiars that some of her recollections are erroneous, that a number of her supposed childhood memories are just plain wrong. There may indeed have been times when Lumir rightfully felt ignored, but not for all of the occasions in her inventory of alleged slights. The bitterness that she built up over certain supposed snubs may have grown so vastly out of proportion that it spilled over into events that just didn’t play out the way she thought she remembered them. And, as with Fabienne’s new realizations about herself, the same becomes true for Lumir.

With these insights, one might naturally think that they ought to open the door for all kinds of schmaltzy reconciliations and a bevy of Hallmark moments. But do they? Is it possible that self-absorbed self-importance might cut both ways? And how much impact might that have as mother and daughter approach one another with new understandings of themselves and their feelings toward the other? Well, that remains to be seen, especially now that each must grow comfortable with their own revised versions of “the truth.”

To casual observers, rocky scenarios like this may prompt some to scratch their heads and wonder how they could have come about. Those who value harmonious family relations may find these kinds of situations completely unnecessary, circumstances manufactured out of needless drama blown all out of proportion. But, for those whose vocations incorporate drama as an integral element – like actresses and screenwriters – is it any surprise that this quality of their working lives might spill over into the personal side of life? In fact, as many movies, books and plays have illustrated through the years, real-life experiences (including those of a domestic nature) frequently feed the imagination of their creators. So, realistically speaking, why should Fabienne and Lumir be any different?

This is not to suggest that mother and daughter necessarily birthed their difficulties purely for career reasons, but their personal experiences probably didn’t hurt in helping them hone their craft. Their passion for their work and their resolute conviction in their abilities as artists undoubtedly helped draw them to circumstances capable of aiding them develop professionally. And, upon recognizing this, it’s entirely possible that they came to believe in what this could do for them, notions that subsequently manifested as experiences that fueled their art – and lives. 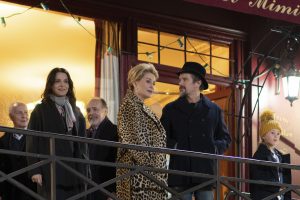 However, as this film illustrates, such situations come with their share of difficulties once materialized. Which is why it’s important to pay attention to the beliefs that give rise to them. As products of the conscious creation process, the philosophy that maintains we draw upon our thoughts, beliefs and intents to realize the world around us, these scenarios show us how powerful those metaphysical building blocks can be and the degree of care we must exercise in how we employ them. They may give us what we need in one sense, but they may also be fraught with other qualities that make life difficult in many other ways. That’s an assessment to which I’m sure Fabienne and Lumir can attest.

If it’s not already obvious, this film demonstrates how our beliefs truly require kid gloves treatment. If we’re cavalier, derelict or unconcerned in our handling of them, we can wreak tremendous havoc on ourselves and those around us. That practice may make for good drama – and effective fodder for writers and actors – but it can also create all manner of problems outside of this context. That’s why we need to take our beliefs seriously in light of what they can create.

This is important not only in recognizing the impact of our beliefs, but also in weighing the accuracy of our assessments (and recollections) of what they ultimately manifest. For Fabienne, the former is certainly an issue, given her often-capricious, frequently oblivious behavior. Meanwhile, the latter is a problem for Lumir in light of her fallible memory. Both of these matters create problems for individuals who aren’t as diligent as they should be, not only for themselves, but also for those around them. Conditions like these may make for good drama but not good relationships.

All is not lost, though, because we can use our beliefs to institute corrective measures (even if we don’t necessarily recognize those solutions as such). Given the long-smoldering discord between mother and daughter, it’s a safe bet that they may finally be ready to reconcile, and that becomes apparent through some of the measures they unwittingly implement to break the stalemate. Fabienne, for example, takes a movie role that gives her insight into Lumir’s feelings, providing an understanding of her daughter’s emotions that she never had before. Likewise, Lumir engages in conversations with those who point out the fallibility of her recollections, making her aware of false memories that she had been holding onto erroneously for decades. In both cases, they may not initially realize the significance of these measures, but, when their underlying intent becomes apparent, it’s obvious why they’ve drawn them into their existence. 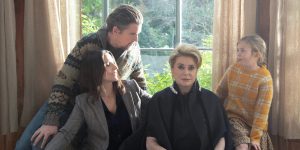 This, of course, spotlights the value of redemption that conscious creation makes possible. Indeed, it’s never too late to make amends, but, as the clock begins to run out, the urgency behind this may get turned up a few notches. It’s something we can implement whenever we want, provided we’re willing to do so.

Making that happen requires that we be honest and sincere with ourselves, that we’re willing to operate from a position of personal integrity. Without that, any efforts we undertake will likely produce only mixed results at best. Given the longstanding mistrust between Fabienne and Lumir, it may be easy to see why this is a quality that doesn’t come easy for either of them. However, if they hope to make things work, they had better decide whether or not they want to get serious about this. We can only hope the best for them.

Director Hirokazu Kore-eda’s first foray into filmmaking outside of his native Japan tells a tale in some ways similar to, and in other ways quite different from, his previous projects. The narrative here recalls Ingmar Bergman’s “Autumn Sonata” (1978) as an adult mother and daughter come to terms with their past in determining what kind of future they would like to forge. Deneuve gives a command performance, award-worthy for sure, and the script is full of ample, laugh-out-loud wit. The pacing in the final act could use some shoring up, but this otherwise-delightful, often-touching offering is worth the time. “The Truth” has primarily been playing at film festivals, but it will receive a general release in late March. 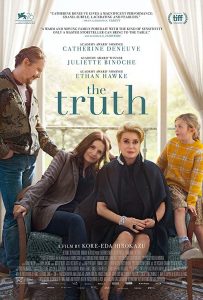 Getting at “the truth” may prove to be a trickier proposition than meets the eye. Because we each hold our own view of events, our perspectives may be tinged by feelings that affect the beliefs that create those perceptions. This, in turn, can open the door for subjectivity and differing interpretations to enter the picture, elements that can become stepping stones to drama and conflict. Sorting out matters when they reach this point can become increasingly problematic, to be sure, but nothing is beyond resolution if we remember what it is we’re seeking in the first place – and take the necessary steps to bring that into being.