It’s difficult to stifle our natural tendency to be ourselves, free of the restrictions that limit our personal growth and development. However, efforts to realize the potential behind that can be thwarted when hindrances are intentionally placed before us, keeping us from moving forward. That can become particularly frustrating and burdensome when we allow it to happen, further slowing our progress and perhaps eventually leading to discouragement. Nevertheless, it is possible to overcome such obstacles and live out the life we were meant to experience, a story inspiringly portrayed in the new, fact-based German political thriller, “Balloon” (“Ballon”).

Life under authoritarian East German rule at the height of the Cold War was pervasively difficult, sometimes perilous, for the majority of its citizens. The nation’s secret police – the Stasi – were virtually everywhere, intrusively spying on the public in myriad ways, even for seemingly mundane activities, and doling out severe punishments for what it considered traitorous transgressions. What’s more, the country’s proximity to its democratic neighbor, West Germany, a nation with which it shared numerous cultural and social commonalities, served as a constant reminder of what East Germans were being deprived of under socialism. The freedom of the West was literally so near yet figuratively so far, a constant temptation to those in the East who wanted greater personal liberties, better career and education opportunities, more readily available consumer goods, and easier access to family members from whom they were geopolitically separated. So it goes without saying that there were many who quietly contemplated escape and were willing to risk the danger to attempt it. But those considering this option needed airtight plans if they hoped to succeed, given that failure could easily mean death. 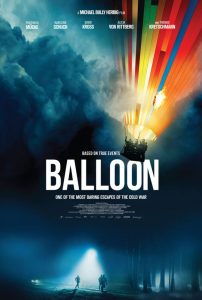 In 1979 in the East German town of Pössneck, not far from the border with the West, two families began work on plans to escape. The Strelzyk family – parents Peter and Doris (Friedrich Mücke, Karoline Schuch) and children Frank and Fitscher (Jonas Holdenrieder, Tilman Döbler) – came up with a novel scheme to flee the tyranny of the East: by quietly floating over the border in a homemade hot air balloon. Working with their friends, the Wetzels – parents Günter and Petra (David Kross, Alicia von Rittberg) and children Peter and Andreas (Till Patz, Ben Teichmann) – the two families clandestinely began constructing their means of escape.

Building the balloon came with more than its share of challenges. For example, the builders had to take ample precautions to make sure their construction materials could not be traced in case any of them were somehow intercepted, something that would almost assuredly prompt Stasi intervention. Even working on the project required care so as not to attract undue attention from officials, such as Erik Baumann (Ronald Kukulies), a “friendly” yet nosy Stasi officer who lived across the street from the Strelzyks. And, then, of course, there was the timing of the escape, which had to be precisely tied to favorable weather conditions (most notably prevailing winds out of the north, a rare occurrence in that part of East Germany). But, despite these conditions, the hopeful escapees carried on, inspired by the promise of what awaited them.

When the time for the flight to freedom came, however, a major hitch was discovered – the gondola was not strong enough to support the weight of all eight passengers. Because of that, the Wetzels chose to back out, but the Strelzyks decided that they hadn’t come this far to give up now, especially when Günter assured them that the gondola would be sufficient to transport four occupants. And so, with a favorable north wind blowing, the Strelzyk family began their courageous journey. 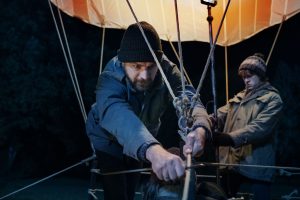 Under cover of darkness, the foursome began their flight. The balloon functioned perfectly, but, because there was a risk of being spotted in the night sky, they needed to ascend to a higher altitude to take advantage of cloud cover to conceal their craft. As they rose higher, the clouds provided the necessary camouflage. However, the condensation from the clouds soaked the balloon’s envelope, weighing down the craft and causing it to rapidly descend as fuel was used up more quickly than expected. And, as a result, the balloon came crashing down to earth – just shy of the border.

Trapped still inside the East, the Strelzyks fled the crash site, covering their tracks as best they could to avoid discovery by the Stasi. And, when officials found the debris, they began an intensive inquiry to find the would-be traitors, an operation headed by Lt. Col. Seidel (Thomas Kretschmann), a determined, no-nonsense investigator committed to finding the guilty parties. Meanwhile, Peter, Doris and their children sought to slip back into their daily routine as best they could, constantly looking over their shoulders to see if they were being tailed while searching for alternate ways to escape to the West, such as unsuccessfully seeking assistance from the American embassy in Berlin. But, with the investigatory noose tightening around their necks, the Strelzyks needed to move fast to come up with a new strategy.

Given the success they almost attained with their first flight, Peter and Doris approached Günter and Petra about building another balloon, a bigger and stronger craft capable of supporting all eight passengers. As they discussed the idea with the Wetzels, Peter and Doris learned there was an added incentive for their friends to sign on: With Günter now facing the prospect of his required East German military service, he wanted to get himself and his family out of the country before his time to report. And so, with both families on board, work began in earnest to construct the new balloon on a tight time frame while keeping from being discovered and staying ahead of the ever-intrepid Lt. Col. Seidel.

The outcome of this story, of course, is well known and thoroughly documented in the public record, so a spoiler alert about how events played out is hardly required. In fact, this tale has already been documented once before in the 1982 Disney release, “Night Crossing.” Nevertheless, the odyssey of the Strelzyk and Wetzel families is considered one of the most daring accounts of courage and determination to come out of the Cold War, a true inspiration to anyone seeking the freedom that is our birthright. 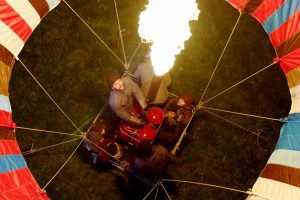 Anyone willing to risk life and limb to escape East Germany at that time had to have considerable drive and ambition – some might say desperation – to attempt it. Given how routinely and thoroughly citizens were being monitored, however, it’s understandable how frantic they were to get away. To make that happen, though, would-be escapees had to come up with strategies that they could realistically and successfully pull off. In short, it called for solid plans they truly could believe in.

Fortunately, there were those – like the Strelzyks and Wetzels – who had the vision to see how to successfully make their exodus. Their scheme was, in many ways, ingenious, a plan made possible by their tautly focused beliefs and their faith in their ability to transform them into tangible results. This is what the conscious creation process makes possible, the philosophy that maintains we tap into these resources to manifest the reality we experience. And, by using this practice to envision their desired outcome, the families moved ahead to see their dream realized.

The oppressive intrusiveness of the Stasi, of course, forced the would-be immigrants to think creatively about their flight to freedom, to come up with a strategy that could slip under the radar of the secret police. Which is what made their plan to use a hot air balloon so inspired; after all, who in their right mind would think of using such an unconventional craft for such a daring getaway? With that in mind, the cautious but hopeful architects of this initiative began their work, growing steadily more confident as they proceeded – even after an initial failure might easily have sapped their enthusiasm and derailed their efforts. That determination to doggedly carry on illustrates the power of our beliefs, especially when galvanized by their steely fortitude to keep moving forward despite the risks and challenges. 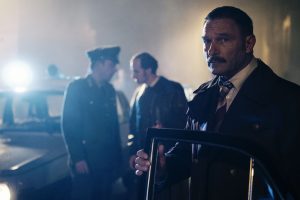 No-nonsense investigator Lt. Col Seidel (Thomas Kretschmann, right) seeks to get to the bottom of an illegal hot air balloon crash in East Germany in 1979 in “Balloon” (“Ballon”). Photo courtesy of Distrib Films US.

Developing this plan would not have happened were it not for its creators’ willingness to think outside of the box. This called for overcoming limiting beliefs to devise something truly inventive, a scheme that provided for their many different needs – a feasible means of transportation, an ability to be executed easily, sufficient flexibility in the face of unforeseen contingencies, and measures that could readily avoid detection, especially given the presence of children who might not be as practiced as their parents in the art of discretion. Coming up with just one of those requirements would have been difficult enough in itself, but concocting a plan that made allowances for all of them indeed took ingenuity – and adequate beliefs to back it up.

Of course, moving ahead with something as audacious as this means pushing aside one’s fears and any beliefs that support them. If allowed to persist, such notions could handily undercut one’s manifestation efforts, keeping desired outcomes at bay. Admittedly, this could be difficult to achieve in an environment where scrutiny and paranoia run rampant, not unlike the conditions the would-be escapees faced under the Stasi. But, if the will to flee is as strong as its adherents claim it is, they must find it within themselves to forge and embrace thoughts centered around courage and heroism. Such beliefs not only help them to achieve what they set out to do, but they also reinforce their efforts along the way, providing an impetus to strive onward toward accomplishment.

What’s most important in all this, though, is the inspiration that the creators’ efforts engender, both among themselves and as examples to others. Considering the harrowing conditions that the Strelzyks and Wetzels were up against, onlookers would likely be hard-pressed to feel sympathy for those with lesser challenges who woefully bemoan their circumstances. Given their plight, it’s truly astounding what the East German runaways were able to accomplish. They genuinely serve as beacons of hope to anyone seeking to attain sought-after goals under pressing conditions. Indeed, if they can do it, so can we. 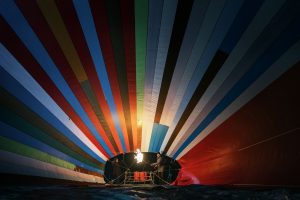 After an initial failed attempt at escaping East Germany in a homemade hot air balloon in 1979, eight courageous individuals try again in a second attempt as depicted in the new, fact-based political thriller, “Balloon” (“Ballon”). Photo courtesy of Distrib Films US.

Not to be confused with the Chinese cinematic fable of the same name, “Balloon” presents a gripping saga of the two families and their heroic venture. This fact-based German political thriller effectively captures the pervasive sense of fright that everyday citizens felt under the scrutiny of the Stasi just in going about their regular routines, let alone in attempting such a bold feat as this. While the picture occasionally overdoes it in its efforts to create dramatic tension, it nevertheless conveys an otherwise-authentic feel of what it was like to live under such stressful conditions – and the desperation to escape it and find a life of freedom. This is rock solid thrill-ride entertainment at its best with a hefty dash of inspiration thrown in for good measure. “Balloon” has primarily been playing the film festival circuit, but a wider theatrical release is in the works.

The price of freedom is sometimes a high one, as the characters in this film come to discover for themselves. However, when the rewards it offers are taken into account, it’s a ticket well worth the admission cost. Their value becomes ever sweeter when experienced firsthand, enabling us to tangibly enjoy what we may have only once dreamed about. And there’s no hot air in that.