‘Extra Ordinary’ urges us to broaden our horizons

At times, it feels like the world around us is shrinking (especially these days). But, if anything, it would be to our benefit in many ways to explore and embrace a broader view, one that expands our horizons and helps us to consider a wider range of possibilities. After all, we might never know what could come from such an effort unless we try, including in areas of our lives that seem fundamentally removed from what we initially set out to do. Such is the case for a cast of colorful characters in the new Irish paranormal comedy, “Extra Ordinary.”

Driving instructor Rose Dooley (Maeve Higgins) leads a generally stable, albeit somewhat unremarkable, life in a small town in rural Ireland. The jovial, playfully quirky middle-aged wallflower dutifully goes about her work and occasionally spends time with her pregnant sister, Sailor (Terri Chandler), though much of the time she’s on her own. The idea of possibly dating someone intrigues her, but, when she considers the effort involved, she’d just as soon skip it and stay at home, lounging in her underwear and downing a carton of yogurt. All in all, it’s a pretty mundane life. 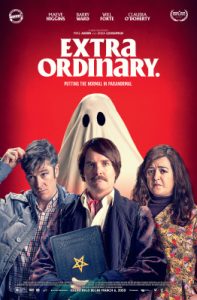 However, there is one aspect that distinguishes Rose’s life – or could distinguish it – if only she’d allow it: Rose is a gifted psychic well versed in the occult arts. It’s a skill that she developed while a child (Aggie Ellis) working as a collaborator with her father, Vincent (Risteard Cooper), a paranormal researcher who produced a series of videos about supernatural subjects. Vincent was particularly interested in ghosts, whom he claimed could be found everywhere and were capable of taking myriad forms, from individuals to animals to inanimate objects, and Rose skillfully aided him in his various undertakings. But, despite the expertise she amassed through these experiences, Rose turned her back on this work after a spiritual encounter gone wrong in which her father was killed in a freak accident involving a “possessed pothole,” an incident for which she believed she was responsible. She walked away, and never looked back.

Nevertheless, despite Rose’s reluctance to embrace new paranormal investigations, she still gets calls from locals seeking assistance with various supernatural issues – unexplained events, pesky spirits, an ornery trash can and all manner of other mysterious phenomena. And, even though the callers insist they need help, Rose always turns them down, choosing instead to focus on her driving school business. But, try as she might to avoid these requests, given her abilities and reputation, she can’t escape them.

While going about her regular routine one day, Rose receives a call from a potential new student, Martin Martin (Barry Ward), a single father raising a teenage daughter, Sarah (Emma Coleman). Rose willingly agrees to take on Martin as a client, especially since she has a passing familiarity with the handsome – and available – widower, a potential romantic prospect who brings a definite sparkle to her eye. As it turns out, though, the request for driving lessons is just a ruse; Martin’s actually interested in Rose’s psychic abilities to help him save Sarah from what appears to be some kind of paranormal takeover. And, when Rose sees the teen levitating above her bed, she’s convinced she has to get involved.

In her work with Martin, Rose further discovers that he’s being routinely harassed by the spirit of his deceased wife, Bonnie. Martin, as it turns out, is quite the henpecked husband, regularly pestered by his late spouse over everything from his choice of clothes to what he can (and can’t) eat. Rose’s presence isn’t welcome, either, as she discovers firsthand when Bonnie begins inflicting her fury on her.

However, Bonnie’s wrath isn’t enough to deter Rose from finding a solution to Sarah’s dilemma. Despite Bonnie’s outbursts, Rose doubts that she is responsible for the situation, given that it involves her own daughter. So that begs the question, “Who’s behind it?”

Unbeknownst to Rose and Martin, the possession is being orchestrated by Christian Winter (Will Forte), a has-been, one-hit wonder pop star seeking to revive his sagging career by making a deal with the devil, a satanic transaction that calls for a virgin sacrifice. Believing that Sarah meets his demonic cohort’s needs, Christian performs incantations and other rituals to summon the teen to his estate on the night of a blood moon. Of course, to pull that off successfully, he must overcome the incessant interference of his demanding, whiny, needy wife, Claudia (Claudia O’Doherty), not to mention the heroic efforts of Rose and Martin to rescue the daughter in distress.

Teenager Sarah Martin (Emma Coleman) is the object of incantations and rituals for a satanic virgin sacrifice in the new Irish paranormal comedy, “Extra Ordinary.” Photo courtesy of Kino Lorber.

There’s a lot riding on what happens when everything comes together for an eventful climax. Will Rose and Martin free Sarah from Christian’s nefarious clutches? Will Christian be able to revive his pathetic music career? Will Claudia ever stop complaining? And can Rose liberate Martin from Bonnie’s constant hounding? Tune in for a spirited conclusion.

Paranormal topics often evoke a variety of responses. Some look upon them as utter nonsense, seeing them as imaginary, fanciful or ludicrous notions. Others dread them, their scary nature conjuring up all sorts of horrific images. And others still believe in them whole-heartedly, viewing them as just another expression of the grand scheme of existence. There may even be cases where these outlooks overlap, as evidenced by Rose’s hesitancy to deal with them despite her proficiency in addressing them. Whatever view an individual embraces, however, depends on one’s beliefs, for they serve to manifest what materializes, a product of the conscious creation process, the philosophy that maintains we draw upon these intangible resources in shaping our reality. And what a reality the protagonists have created here!

Despite the strange happenings, however, there are reasons behind what occurs as a result of these bizarre events, including some valuable life lessons. Most obviously, the incidents that unfold here show us that there’s indeed more to existence than what’s before our eyes. At bottom, this is intended to get us to expand our horizons, to move beyond limitations constrained by conventional thinking and to encourage us to envision – and recognize – the wider world that’s around us. When the film shows us, for example, that ghosts can adopt all manner of forms – from tree branches to appliance cords to family pets – it provides characters and viewers alike with insights that transcend traditional perspectives, perhaps winning over skeptics and broadening the scope of paranormal agnostics.

One set of limitations that’s particularly important to overcome involves the fears that hold us back, something that frequently comes up in scenarios involving the supernatural. This can be crucial for those who feel like they’re being unduly held back, preventing them from growing and developing as individuals. This can occur even with those for whom it would seem such fears shouldn’t be an issue. Rose, for instance, is well acquainted with ghosts, apparitions and spirits, yet, based on what happened with her father, she has a definite apprehension about becoming reacquainted with the subject matter. But, given the various issues she’s seeking to address, if she’s to succeed, she’ll need to move past the beliefs that are restricting her, not only in her vocational life, but also in her romantic endeavors. That may be a lot for her to take on, and the circumstances that she draws to her to deal with these matters could be a lot to handle, but, should she conquer these qualms, she could see remarkable outcomes from her efforts.

When it comes to the incident involving her father, Rose has been carrying a heavy burden for quite some time. The belief has become entrenched, and, as her story reveals, it has been significantly holding her back. She feels saddled with guilt, and she has not been allowing herself to use the gifts that seem to come so naturally to her. But there’s no need to stay stuck; rewriting one’s beliefs is always possible, and that can be particularly beneficial in matters of redemption. There’s no reason for Rose to believe that she must remain trapped in the personal purgatory she’s created for herself unless she intentionally chooses to do so. Of course, she’ll need to recognize this before she can do anything about it, but, if circumstances enable that, there’s no telling what she can accomplish – and what encumbrances she can offload, especially those that are serving no useful purpose.

By making changes such as this, we have an opportunity to live out our destiny, to practice what conscious creators call value fulfillment, the concept associated with being our best, truest selves for the benefit of ourselves and those around us. Should Rose opt to pursue this course, she can do a world of good both for herself and those in her community. With so many mischievous spirits about (such as Bonnie), Rose has the power to help improve the lives of the victims subjected to their abuse. It makes it possible to help realize ideas that otherwise might not have been given a ghost of a chance.

According to a paranormal researcher, ghosts are seemingly everywhere, even in the most ordinary circumstances, as seen in the raucously funny new comedy, “Extra Ordinary.” Photo courtesy of Kino Lorber.

This little-known Irish gem from directors Mike Ahern and Enda Loughman links the wildly outrageous with the raucously funny and warmly touching in an off-the-wall paranormal comedy. While the film drags a bit in the first half hour and occasionally tries a little too hard to land its laughs, it nevertheless progressively hits a series of home runs with its one-liners and visual gaffes, especially in its raucous last half hour. Comedienne Higgins plays well off her two male co-stars, seamlessly weaving together both jokes and straight lines, always keeping viewers guessing what she’ll say. With clever comic nods to horror classics like “The Exorcist” (1973) and “Ghost Busters” (1984), this independent offering, now available for first run streaming, definitely passes the time nicely. It’s not everybody’s cup of tea, but, for those who like their humor a bit on the twisted side, this is one for you.

When things don’t go the way we hope they would, it’s easy to start shutting down and closing ourselves off. But, by doing so, we run the risk of missing out on a wealth of rewarding experiences, in a wide spectrum of life. By being willing to cast off our self-imposed shackles and explore opportunities we might not otherwise have considered, we can see a big, wide world we may have never known existed. And that, truth be told, is truly something extraordinary.