The impact of bullies has gained wider recognition in recent years. In most instances, this increased attention has focused on the detriment to individuals, but it can just as readily affect groups and entire communities, even if these situations don’t garner the same amount of distinction. But that’s not to suggest that such conditions must be willingly tolerated, a circumstance explored in the enigmatic new morality play, “Bacurau” (“Nighthawk”).

What’s happening in the remote Brazilian village of Bacurau? Not long after the death of the town’s 94-year-old matriarch, Carmelita (Lia de Itamaracá), all manner of strangeness has occurred. Admittedly, things weren’t entirely “normal” before her passing, but, in the time since her transition, the weirdness has been significantly ramped up. Consider the following: 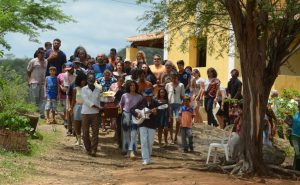 The death of the matriarch of a remote Brazilian village is followed by a series of unusual events, a concern for the locals, in the intriguing new offering, “Bacurau” (“Nighthawk”), available for first-run online streaming. Photo by Victor Jucá, courtesy of Kino Lorber.

Teresa (Bárbara Colen, center), granddaughter of the deceased matriarch of a remote Brazilian community, returns home for her relative’s funeral in the latest release from the writing/directing duo of Juliano Dornelles and Kleber Mendonça Filho, “Bacurau” (“Nighthawk”). Photo courtesy of Kino Lorber.

To get to the bottom of these mysterious incidents, an ad hoc group of locals begins looking into them. Heading up the team of amateur sleuths is Acacio (a.k.a. Pacote) (Thomas Aquino), a shadowy figure whose past is never really explained, though he would seem to pass as a hired gun. Pacote is joined by his onetime girlfriend, Teresa (Bárbara Colen), Carmelita’s granddaughter, who has returned home to attend her funeral; Plinio (Wilson Rabelo), Teresa’s father and a teacher at the local school; Dr. Domingas (Sônia Braga), the town physician, who’s agreeable when she’s sober, but watch out when she’s been drinking; Lunga (Silvero Pereira), a wanted outlaw who’s caught up in the water supply issues; and Damiano, the farmer who spotted the drone. This ragtag group of investigators share leads and combine their efforts to figure out what’s happening and how to address them.

As the inquiry unfolds, evidence of the presence of outsiders begins to emerge, most notably that of a stern senior with a German accent named Michael (Udo Kier). He stalks the village with his band of followers (Jonny Mars, Alli Willow, James Turpin, Julia Marie Peterson, Brian Townes, Charles Hodges, Chris Doubek), all of whom seem very intent on carrying out a mysterious and macabre mission, but to what end? That’s what the residents of Bacurau must find out – while there’s still time.

One would think that Bacurau’s idyllic setting would make it a desirable place to live. But, if so, why has it been beset by so many hardships and ominous happenings? Why here? And what, if anything, have the residents done to bring these ordeals down upon them? That’s what the villagers hope to discover, but, given the cryptic nature of these occurrences, solving the mystery may prove challenging. 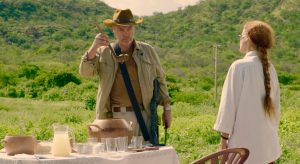 In perilous situations such as these, one would think it might be easy to buy into the fear that often accompanies them. But, perhaps somewhat surprisingly, such apprehensions aren’t exactly the norm here. Why? It has to do with the independent, determined spirit of the townsfolk. Living on the edge of the Brazilian frontier, they have long considered themselves a tough, thick-skinned, strong-willed people, unafraid to stand their ground to protect what they’ve built, even in the face of potentially powerful foes. Evidence of this can be found proudly displayed in the town’s museum, a chronicle of Bacurau’s tradition of assertiveness and, when called for, stalwart defiance. And, with such an innate attitude in place, the residents are prepared to tackle the current crisis as just the latest challenge to their sovereignty and authority. In light of that, it should thus come as no surprise that the town’s name translates from Portuguese into English as “nighthawk.”

This is all made possible by the beliefs of the townsfolk, staunch adherents of the practice of conscious creation, the philosophy that holds we draw upon these metaphysical resources in manifesting the reality we experience. Regardless of whether or not they have heard of this doctrine, they’re nevertheless well versed in its principles, especially when they apply them collectively in acts of co-creation. And, given that their materialization efforts are geared toward protecting what they’ve so diligently and proudly built, they have a vested stake in making that happen. That kind of commitment, built upon their resolute faith and conviction, stems from the underlying beliefs of the residents working jointly to see the realization of their desired outcome.

A number of belief components make up this overall perspective. For example, they’ve learned how to conquer their fears and live courageously, accomplishments that they’ve drawn upon for inspiration in reinforcing the beliefs they employ in manifesting their existence. In that vein, they have also learned how to hold onto their personal power, refusing to give it away to those seeking to take it from them. And, of course, they have developed a keen sense of discernment to strip away the clutter that could otherwise obscure the truth, allowing them to see matters clearly, enabling them to put appropriate beliefs in place to help them attain what they seek to accomplish. 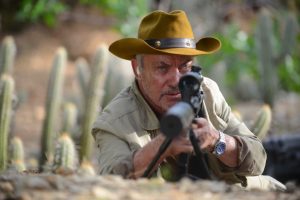 Michael (Udo Kier), leader of a mysterious band of foreigners, has an agenda for a remote Brazilian village, but what is it? That’s the secret of 2019 Cannes Film Festival Jury Prize winner “Bacurau” (“Nighthawk”), now available for first-run online streaming. Photo courtesy of Kino Lorber.

What’s more, the residents of Bacurau don’t hesitate to look beyond themselves for help. As a deeply spiritual people, they’re well aware of the powerful beneficial forces that transcend the boundaries of the physical reality surrounding them, and they’re willing to avail themselves of that assistance when needed. They readily understand that the “localized” existence they know best is but merely one expression of a greater reality and that those who dwell in those other dimensions can provide aid when required. They know that the Universe provides what’s needed, including through its emissaries, even some who are already familiar to them, such as their recently departed matriarch. Miracles, it would seem, truly are possible.

In many regards, the experiences of the people of Bacurau are a modern-day fable of sorts, a metaphor for the state of Brazilian society and politics, institutions besieged by a variety of marauding forces, including some that originate outside the country’s borders. The townsfolk, who represent a diverse array of constituencies and come from a wide range of backgrounds, stand as symbols of a coalition willing to collectively and heroically confront adversaries seeking to plunder the community for their own gain. They demand respect and make that intent plainly known to all who pass their way, even on the signage at the entrance to town, where the village’s motto – “Se for, vá na paz” (“If you go, go in peace”) – is clearly emblazoned for everyone to see. Indeed, in an age where the global reset button is in the process of being pushed, their story provides an inspiring tale of what’s possible, especially when it comes to what will and won’t be tolerated. 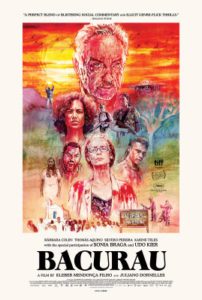 This modern-day homage to good old-fashioned Westerns like “The Magnificent Seven” (1960)  (and its classic Japanese predecessor, “Seven Samurai” (1954)), combined with whimsical, spiritual and paranormal aspects in the tradition of The Twilight Zone, give the film a singularly distinctive spin and make it one of the most readily identifiable offerings in the genre. Throw in the overt and metaphorical criminal and political elements, and you’ve got quite a mix of influences and volatility. The film’s narrative, unveiled ever so meticulously and methodically, addictively retains viewer interest by preserving the mystery as long as possible but without becoming tiresome or tedious. The picture’s excellent cinematography, strategically placed splashes of campy humor and classic good vs. evil story line make for an entertaining couple of hours. Be forewarned, however, that the picture is quite violent at times, though it never becomes wantonly gratuitous outside its context (even though sensitive viewers may wish to take a pass).

Writer/directors Juliano Dornelles and Kleber Mendonça Filho have created what many are already calling a cult classic. That recognition surfaced after the 2019 Cannes Film Festival, where the picture won the Jury Prize award and received nominations for the Queer Palm award and the Palme d’Or, the event’s highest honor. “Bacurau” played at numerous stops on the 2019 film festival circuit, followed by a gradual release overseas at the end of the year. In North America, with the current closure of movie theaters, the picture has been made available for first-run online streaming. 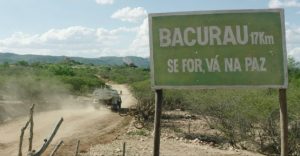 “Se for, vá na paz” – “If you go, go in peace” – the motto of Bacurau, a remote Brazilian village, gets put to the test in the enigmatic new thriller, “Bacurau” (“Nighthawk”), now available for first-run online streaming. Photo courtesy of Kino Lorber.

Standing one’s ground may not be easy, calling for qualities like perseverance, fortitude and gumption, commodities that may not be readily mustered individually, let alone collectively. However, when there’s a lot to lose, somehow we often manage to find a way to summon them up. With so much at stake, their importance can’t be overstated. So, with that in mind, it’s in our best interests to get busy and make that happen so that, like the inner bacurau that lurks inside each of us, we can stealthily and successfully stalk and overcome our prey – before they do the same to us.