‘To the Stars’ charts the emergence from one’s shell

Adolescence is seldom an easy time for many of us. It’s an age of exploration and experimentation, a period when we examine the world and ourselves to see how we mesh together. The fit isn’t always exact, though, particularly when our authentic selves differ significantly from what we see around us. It often prompts us to retreat into our shells, sometimes covering our eyes in the process as we struggle to reconcile the discrepancies. But, no matter what coping mechanisms we may employ, coming of age can still be a trying time until we find the key to unlock this especially troublesome door. So it is for a teenager seeking to find herself in the new period piece drama, “To the Stars.”

For a sensitive, misunderstood loner like Iris Deerborne (Kara Hayward), attempting to fit in can be a daily exercise in emotional distress and personal frustration. After all, life in small town Wakita, Oklahoma in the 1950s can be stifling enough in itself, let alone for someone whose outlooks and sensibilities aren’t on the same wavelength as everyone else. The constant pressure to conform, as well as many failed attempts at being like everyone else (and the resulting ridicule that comes from those efforts), have taken their toll, leaving Iris with her share of neuroses. In particular, she suffers from bladder control issues, a condition that has prompted her snarky high school classmates to label her with the insulting nickname “Stinky Drawers.”

It doesn’t help that those around Iris continually reinforce the angst she feels. For example, her mother, Francie (Jordana Spiro), a budding alcoholic who shamelessly flirts with local teenage boys, constantly badgers Iris to improve herself, most notably by looking for ways to land a boyfriend. Mom is lovingly supportive of her daughter but only as long as Iris follows her recommendations; whenever the adolescent seeks to follow her own impulses, Francie’s snarly side comes out, her venomous attitude fueled by a mix of generational jealousy and retribution for rejection of what she believes to be foolproof recommendations. 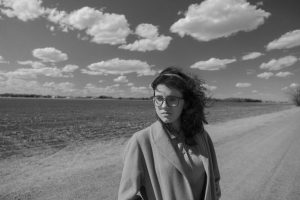 But the troubles don’t stop at home. Iris is bombarded by even more teasing and mockery at school from a pack of mean girls, the popular, cheerleader types who refer to their little clique as “the Songbirds.” Clarissa Dell (Madisen Beaty), the leader of this spiteful little coterie, dishes out more than her share of hurtful barbs, even advising others that hanging out with Iris is tantamount to social suicide. Her efforts are backed by a pair of minions, Rhonda Robertson (Lauren Ashley Stephenson) and Hattie McCoy (Sophi Bairley), sidekicks who handily get in their fair share of cheap shots and faithfully back their alpha when called upon.

Iris seeks solace by looking for ways to be by herself. She frequently hides out in her bedroom, buried under the covers with a transistor radio plastered against her ear. She also goes for late night swims in a nearby pond, one that most locals avoid given that it was the site of a young mother’s tragic suicide. All in all, it’s a pretty lonely life. In fact, the only people who show Iris any meaningful respect and support are her father, Hank (Shea Whigham), and the family’s teenage farmhand, Jeff (Lucas Jade Zumann), son of the woman who killed herself.

Things take a drastic turn, however, when a new student arrives at Wakita High, Maggie Richmond (Liana Liberato). The urban transplant, who recently relocated to Oklahoma with her family from Kansas City, exudes an air of confidence that allows her to carry herself with authentic self-assurance – and to quickly put the Songbirds and pushy teenage boys in their place whenever the need arises. She also uses this confidence to come to Iris’s rescue whenever she’s being taunted by others, a sort of combination big sister and bodyguard.

Iris is initially perplexed by Maggie’s unsolicited support. Since almost no one has ever come to her defense before, she fails to understand why anyone would have her back. But, the more time they spend together, the more a bond is forged between the two. In addition to protecting Iris from the malicious influences around her, Maggie also helps to bring her shy friend out of her shell. She shows Iris how to change her appearance, providing her with clothing and make-up tips, as well as teaching her how to be more impulsive and in charge of her life. She even takes Iris for a visit to the local beautician, Hazel Atkins (Adelaide Clemens), for a makeover, a transformation that catches the eye of Dad and Jeff and even evokes new reactions from the Songbirds. In fact, the only one who seems unmoved by these changes is Francie, who expresses an undefined mistrust of Maggie; is this because Iris follows her friend’s makeover recommendations over hers, or is there something more behind her suspicion? 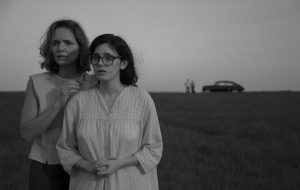 Over time, despite the closeness that Iris and Maggie have forged, a certain inexplicable tension begins to mount between them. Maggie, it seems, is starting to pull away, alienating herself from her parents (Malin Akerman, Tony Hale), attempting to force a relationship with a football player (Matt Coulson) for whom she has no apparent feelings and spending more time with Hazel. To repay all the kindnesses Maggie extended to her, Iris now tries to return the favor to her friend, but she’s met with the sort of mistreatment she once received from others.

What happened? That question’s answered as the film races toward its conclusion. In a curious mix of surprises and predictability, the characters play out their story, one that in some ways rockets out in new directions while simultaneously coming full circle. The protagonists may reside in Oklahoma, but their journey also takes them someplace more magical – to the stars.

At the outset of this story, one can’t help but look upon Iris and sigh “Poor girl.” She’s desperately struggling to navigate choppy waters in which she’s given precious little opportunity to be herself. Her outcast ways repeatedly place her in difficult circumstances from which there is seemingly no escape. And, the more they recur, the more exasperating it becomes to extricate herself from them. What is she to do?

As vexing and menacing as this situation is, and as troubling as the actions of those around her are, Iris herself also plays a role in her tribulations by unwittingly allowing those conditions to persist. She has firmly come to believe in the negative nature of her circumstances to such a degree that she can’t see her way past them. And that’s attributable to the conscious creation process, the philosophy that maintains we draw upon those metaphysical resources to manifest the existence we experience. Even if Iris has never heard of this practice (which, in all likelihood, she hasn’t), she nevertheless consistently draws upon it to create – and reinforce – the reality around her.

Obviously Iris needs a way out to turn things around, but where does she begin? She likely isn’t aware of the power of her beliefs and what they’re manifesting, let alone how to change them to something preferable. Yet she also recognizes, even if in unspoken solitude, that she’s not allowing her true, authentic self to shine through. Without a clue on how to proceed in altering her existence, she seeks to latch on to some kind of catalytic spark to help show her how. 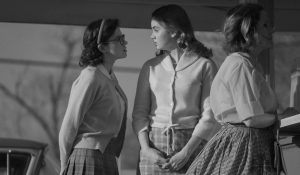 Enter Maggie. In a relatively short time, the newcomer opens Iris’s mind to possibilities that she hadn’t previously considered. This empowers the wallflower to explore new options and to develop the self-confidence necessary to bring them into being. It’s as if a lightbulb flashes on, enabling Iris to tell herself “I can do that,” a realization she’s never contemplated, let alone embraced, before. Almost overnight, Iris goes through a transformation unlike anything she’s ever experienced.

Key to this is Iris giving herself permission to rewrite her beliefs. She decides it’s time to come out of her shell, to start participating in life more fully than she ever has. It enables the authentic Iris to surface, the one who gives her life meaning, satisfaction and fulfillment, no matter how counter it runs to the lives and expectations of others around her. Indeed, it represents a far cry from her past self.

Interestingly, this alteration to Iris’s reality echoes outward to those around her. Once she’s developed the confidence to change her circumstances, she feels empowered to help others do the same. For instance, the example she sets helps to evoke new and different reactions toward her from the Songbirds, as well as to unexpectedly turn Jeff’s head. Iris even feels capable enough to try and help her mentor when she experiences emerging challenges, even if she doesn’t fully understand what her friend is going through. That’s quite a turnaround, to be sure.

The evolution Iris undergoes also illustrates one of conscious creation’s cornerstone principles – that everything is in a constant state of becoming. Thankfully, that’s generally fortuitous, too, especially when we witness the kind of unrelenting stagnation Iris experiences at the film’s outset. If she were to continue living that kind of life, we can only imagine the lack of fulfillment and joy she probably would have had to endure going forward.

Fortunately, Iris develops an awareness of alternatives and the wisdom to act upon them by shifting her beliefs and backing them up with actions. This is a process that takes courage to overcome our fears and limitations, to be willing to take the steps necessary to explore uncharted territory, to live a truly heroic life. That’s an accomplishment to be commended and celebrated for it brings to us so much more than what we might have imagined and can make the creation of our reality such an overwhelmingly exhilarating experience – even in small town Oklahoma. 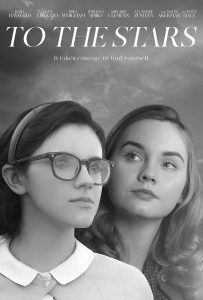 This endearing offering from the coming of age genre provides viewers with a story chock full of surprises, warmth and incisive humor. While the film has its share of clichés (especially in the last half hour), it redeems itself by serving up a touching, inspiring friendship story, the kind that’s seen all too rarely in contemporary cinema. Exquisitely filmed in black and white with a fine cast, smart writing and an atmospheric score, this latest production from director Martha Stephens recalls such releases as “The Last Picture Show” (1971) and “Desert Hearts” (1985) but with a narrative and sensibilities all its own. This Grand Jury Prize nominee from the 2019 Sundance Film Festival may not have attracted much attention, but it’s definitely a heartwarming charmer, now available through first-run online streaming.

As we make our way into adulthood, we must inevitably pass through the sometimes-narrow portal that is youth, something we frequently look back on in later years as being wasted on the young. However, as challenging as this time can be, it often prepares us for what’s to come, helping us become the individuals we are in our maturity. Through various fits and starts, we have an opportunity to come out of our shells and discover our authentic selves, tweaking our thoughts, beliefs and intents as needed to become who we want to be and lead the life that suits us. The possibilities in this are astronomical – and as bright as all the stars in heaven.