Skip to content
Home/Conscious Creation, Drama, Movie Reviews/‘Miss Juneteenth’ cautions us on the dangers of stalemates

‘Miss Juneteenth’ cautions us on the dangers of stalemates

Being stuck in our circumstances can be a horrible fate. Such stalemates keep us mired in unsatisfying conditions, preventing us from moving forward. But what’s even worse is not realizing that we are stuck, an exercise in ongoing frustration examined in the new generational drama, “Miss Juneteenth.”

In 2004, Turquoise Jones (Nicole Beharie) was proudly crowned Miss Juneteenth, the top honor in a beauty pageant staged in honor of the 1865 freeing of the remaining Black slaves in Texas, two years after President Abraham Lincoln issued the Emancipation Proclamation. Turquoise was thrilled by her victory; in addition to the notoriety that came with the title, she received a full scholarship to a traditionally Southern Black university of her choice. She sincerely believed that this achievement was the start of a bright future, full of promise and accomplishment.

Fifteen years later, however, life has turned out to be very different from what Turquoise expected. As the single mother of a free-spirited teenager, Kai (Alexis Chikaeze), the daughter of a fundamentalist Christian but alcoholic mother, Charlotte (Lori Hayes), the separated wife of an unreliable husband, Ronnie (Kendrick Sampson), and the manager of a popular but rundown Ft. Worth barbecue joint, she has her hands full. She struggles to hold things together but somehow manages to get by. But, as pressures mount, will she be able to continue doing so?

Turquoise’s biggest concern is Kai. She wants her daughter to have a better life than she has had. And, to make that possible, she’s convinced it can happen by Kai following in her footsteps as the next Miss Juneteenth. She scrimps to save up the funds needed to cover the pageant entry fee and to pay for a beautiful gown (ironically, a lovely shade of turquoise). She also works hard at helping Kai develop the poise and qualities needed to become a successful contestant. There’s just one catch – Kai doesn’t really want it. 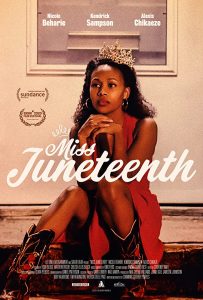 Considering everything that Turquoise is doing for her, Kai might be looked on by some as an ungrateful brat. But is she? It’s obvious she’s quite gifted as a dancer known for provocative steps and equally enticing costuming, but is she really cut out for the comparatively tame acts typical of a beauty pageant contestant? That’s apparent as she struggles to recite the Maya Angelou poetry that her mother insists she present in the pageant’s talent competition; it’s just not her style. What’s more, Turquoise is concerned that Kai isn’t making an effort to portray herself with the expected retiring and demure attitude of a beauty queen. Turquoise suggests that Kai may be hanging around with bad influences, including a would-be boyfriend (Jaime Matthis) and even her own father, afraid that such associations could leave the wrong impression with onlookers who see Kai out in public and thereby jeopardize her chances of winning.

Thus begins an ongoing struggle between mother and daughter. Kai has dreams of her own and wants to be able to be herself in fulfilling them. Turquoise, meanwhile, may be well-meaning when it comes to her daughter’s welfare, but is she truly looking out after Kai’s best interests or trying to make up for her own failings related to an opportunity that didn’t pan out as anticipated? It’s one thing to have hopes for one’s child, but it’s something else entirely to be an all-encompassing control freak. After all, Turquoise, of all people, should be cognizant of that in light of her own mother’s incessant attempts at trying to coerce her into joining her church. Can’t she see the parallels?

With these conditions in place, the stage is set for a showdown between what mom wants and what her 15-year-old daughter is prepared to do. Will there be joy and celebration? Or will there be despair and disappointment? Or is it possible that something else entirely may emerge? Await the envelope to see what wins the day.

It’s indeed unfortunate that circumstances haven’t turned out for Turquoise as hoped for. But, to a certain degree, one can’t also help but ask, “Who’s fault is that?” She’s apparently an intelligent and resourceful woman, but she’s made what some would consider questionable choices along the way, and those decisions have left her to deal with the consequences. She’s not happy with what she’s been saddled with, but that doesn’t mean she’s reconciled to those conditions for the rest of her life. So what is she to do about them?

Much depends on what Turquoise believes about herself – who she is, what she’s capable of and what she would like to do. And the beliefs underlying those matters are crucial, for they will determine what results. This is the essence of the conscious creation process, the philosophy that maintains we draw upon the power of our thoughts, beliefs and intents in manifesting the reality we each experience.

If Turquoise genuinely hopes to rise to the excellence she believes she’s capable of, she’s got her work cut out for her when it comes to assessing her abilities, commitments and objectives, as well as the beliefs underlying them. How she sees herself is important, because it will determine which thoughts, beliefs and intents she embraces. And, on this front, she needs to take a critical look at where she stands.

Obviously, Turquoise is holding on to hope from the past that failed to materialize. It has kept her stuck in place for 15 years. And now she’s seeking to impose this same thinking on someone else who isn’t burdened by such notions – Kai. Turquoise is hoping to get a second shot at the brass ring vicariously, transferring her aspirations onto a daughter whose own dreams are different from those of her mother. And, given the desperation Turquoise feels, the more aggressively she seeks to impose her aims on Kai, who’s anxious to strike out in her own direction, regardless of what her mother wants.

Clearly, Turquoise is holding on to beliefs and sought-after outcomes that no longer serve her. This is true not only where the pageant is concerned, but also in her relationships with Ronnie, Charlotte and even Wayman (Marcus M. Mauldin), owner of the barbecue joint. She readily slips into the role of caretaker in each of these cases, dutifully trying to help them out with their shortcomings, just like a good little beauty queen contestant should. But, if Turquoise sincerely wants to help herself move forward, she must realize what she’s doing and cut these ties, changing her manifesting beliefs accordingly.

In their own way, Kai, Wayman, Ronnie and Charlotte are all attempting to point Turquoise in this direction. Kai is determinedly seeking to reach out and follow her own dreams, providing an example for her mother to follow; Wayman flat out tells his manager that the restaurant is his, that he owns it free and clear, and that he’ll run it the way he wants; and Ronnie and Charlotte each make promises they can’t keep and behave unacceptably in various ways, purposely trying to drive wedges between them and Turquoise to implicitly encourage her to let go of them and their issues, problems that only they can solve. The question is, of course, “Is Turquoise paying attention?”

In addition to realizing the inherent pitfalls in these situations, Turquoise must accept responsibility for her actions (or inactions). Again, others (most notably Kai and Wayman) are attempting to set examples for her. They’re accountable for their choices and what results from them, for better or worse. But what matters most is that these are their choices and that they’re being responsible for them. If Turquoise were wise, she’d follow suit.

Should Turquoise choose to follow this path, opportunities await. For example, in addition to working as the restaurant manager, Turquoise is a part-time cosmetician for a funeral home owned by her friend Bacon (Akron Watson), someone who’s interested in her for more than just her makeup application abilities. As his business is expanding, Turquoise faces the prospect of a full-time job. And, as circumstances go south in her relationship with Ronnie, a willing, successful and responsible suitor waits in the wings.

So why isn’t Turquoise jumping at these opportunities? That’s on her. As someone who’s struggling to discover her authentic self and the beliefs that shape it, she hasn’t fully realized what’s on offer. To a great degree, she must give herself permission to avail herself of them, but, given where her mindset is at, she’s not ready to do so until she lets go of the belief flotsam that’s obscuring her view. Whether or not she takes this step depends on her ability to discern her circumstances and take advantage of what’s been presented to her. For her sake, we can only hope she does.

There’s a tremendous irony in all this, too. After 15 years, Turquoise is still hung up on the pageant and her failure to capitalize on its promise, a preoccupation that has, in many ways, kept her trapped in her past. Yet the Miss Juneteenth competition was established to celebrate emancipation, and Turquoise’s personal liberation has been thwarted by her own stalled fixation. Some might argue that this isn’t entirely surprising, considering that beauty pageants themselves could be viewed as anachronisms that hold women back, keeping them corralled into lifestyles and modes of behavior that are anything but liberating, another irony in light of the historical event that this pageant was created to celebrate. Given the nature of these competitions, perhaps it would benefit not only Turquoise, but also all other potential contestants, to eschew the assumed “value” of events like this, opting instead to explore possibilities that applaud the independence and empowerment of women. Now there’s something worth celebrating.

“Miss Juneteenth” lovingly tells a bittersweet tale about expectations that don’t pan out as hoped for but that can still work out in the end, provided we don’t become locked into inflexible, obsessive thought patterns. This touching and complicated story about trying to live one’s dreams – or to compensate for our failures by living them out through others – features excellent performances by Beharie and Chikaeze (in her big screen acting premiere), as well as a smartly written, though occasionally predictable screenplay. Director Channing Godfrey Peoples’s feature film debut marks the appearance of a promising new talent, serving up an entertaining and heartwarming tale that breaks many molds, delivers a wealth of surprises and offers viewers much to ponder. The film is available for first-run online streaming.

Wallowing in wishful thinking and thoughts of “what might have been” may provide us temporary shelter from the storms of our psyche when we’re not ready to address what’s troubling us. But taking up permanent residence there can cause considerable long-term harm to our personal growth and development, especially if we aspire to the greatness we know we’re capable of. Taking stock of who we are and what we want, as well as the attendant responsibility, can help promote the forward progress that gets us moving again. And, if we stick to our convictions, that just may lead to crowning achievements beyond our wildest dreams.