‘Yes, God, Yes’ explores the depths of sex and spirit

The mystique underlying highly personal subjects like sexuality and spirituality is undeniable, something that’s tailor made to our individual needs and sensibilities. So how is it that some of us feel we can dictate the terms of these matters to others, as if our views were the last word and not to be questioned? How is it that such canned perspectives can realistically fit everyone? And why must those who disagree with these outlooks be ridiculed, bullied or punished for their dissent? Those are some of the rather heady questions addressed in, of all things, the raucous but insightful new teen comedy, “Yes, God, Yes.”

Adolescence can be difficult enough all by itself, but it can be even more challenging when under the thumb of one’s peers, family and environment. So it is for Alice (Natalia Dyer), a student at a Catholic high school, presumably somewhere in the nation’s heartland. At a time when she curiously begins exploring typical teen matters, like her emerging sexuality (particularly the pleasures of “self-love”), she’s anxious to see what it’s all about, despite the harsh admonitions from her teachers and the school’s resident priest, Father Murphy (Timothy Simons), that it’s a mortal sin guaranteed to assure her a one-way ticket to hell. What’s more, in addition to such warnings, Alice (like all of her peers) is constantly reminded of the consequences of being too outwardly provocative by faculty watchdogs like the seemingly ubiquitous Mrs. Veda (Donna Lynne Champlin), who aggressively writes up students for the slightest infractions of the school’s dress code and behavioral expectations.

Needless to say, Alice cowers in nearly perpetual dread. She keeps her feelings locked up inside, afraid to admit them to anyone except her friend Laura (Francesca Reale), and even that makes her somewhat uneasy, especially when rumors about alleged but untrue erotic incidents involving her mysteriously begin circulating among her classmates. However, despite the risks involved in coming clean, she can’t deny the need to unburden herself about these powerful urges. She feels compelled, albeit reluctantly, to confess her infatuation with the steamy below-decks sex scene in “Titanic” (1997), something she watched three times in a row during a recent viewing thanks to her VCR remote’s handy rewind function. But things get ramped up even more not long thereafter when she unwittingly engages in a racy AOL chat room exchange with another user. There isn’t a shower cold enough to put out the flames of her desire. 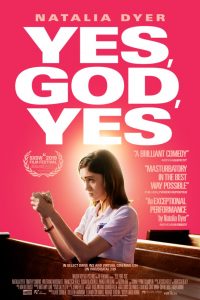 Circumstances take an unusual change not long thereafter. While having lunch at school one day, Alice and Laura run into their once-subdued classmate Beth (Teesha Renee), who inexplicably appears to have undergone a remarkable transformation, one that has enabled her to blossom with a radiant glow. This unexplained conversion even seems to have altered Beth’s circle of friends; suddenly she’s seen in the company of the popular kids, like Nina (Alisha Boe). One could say it’s a miracle.

When Alice asks Beth what prompted this change, her luminous friend says it came about after attending a four-day religious retreat with her peers. The effect is so appealing to Alice that she’s convinced she needs to have the same experience. And so, with Laura in tow, they sign up for the getaway, to be held at a secluded wooded location.

The retreat proves to be quite a revelation, and in many more ways than Alice expected. She quickly finds she’s not alone when it comes to her emerging sexuality. In fact, her mere interest in things erotic pales in comparison to the acts engaged in by her peers, including some from whom she never would have expected such behavior. On top of that, Alice’s hormones get a supercharged boost when she’s assigned to work with a facilitator for whom she carries an enormous torch; indeed, the time she spends with Chris (Wolfgang Novogratz), a kind and handsome football player, is an exercise in excruciating restraint, particularly when he sends what appear to be decidedly mixed but nevertheless hopeful signals toward his impressionable young charge.

At the same time, though, the retreat also proves to be a difficult time for Alice, especially when she’s found to have broken some of the rules, acts that earn her penance for her “transgressions.” She also learns that she’s become the object of more rumors, some of which followed her from home and others of which arise over the course of the event. Those developments, combined with the rampant hypocrisy she witnesses, as well as the seemingly ever-present judgmentalism inflicted upon her, prompt Alice to leave the retreat during an evening campfire. She wanders along a nearby highway, eventually ending up at a roadside bar, where she meets the owner (Susan Blackwell), who proves to be the most insightful mentor she meets all weekend. Through this encounter, Alice gleans understandings about herself, her life, her sexuality and her faith that prove far more important than anything the retreat ever could have taught her. Indeed, getting away from it all can truly provide us with a fresh new perspective, one that’s more fitting and fulfilling than anything the so-called experts could ever supply – even those who claim to speak for God.

When it comes to matters as patently intimate as sexuality or spirituality, we find ourselves on some of the most personal and profound turf onto which we’ll ever venture. The decisions we make for ourselves in these areas are based on our sensibilities, choices made on the basis of our individual likes, leanings and proclivities. But what’s most important is that these determinations are ours – and no one else’s business.

Growing comfortable with such notions can be challenging when we’re in our youth. Since we’re uncertain about our world, we tend to be eminently impressionable, easily swayed by the influences around us, particularly those in seeming positions of authority. But are those authoritarian dictates what we truly believe deep down inside? Do their pronouncements genuinely resonate with who we are? And, if not, what do we do about it?

The key in bringing our own vision into being, especially when it comes to such highly personal matters, is identifying and embracing our innermost thoughts, beliefs and intents, the building blocks of the conscious creation process, the philosophy that maintains we draw upon these resources in manifesting the reality we experience. Of course, given the gravity involved in questions of sexuality and spirituality, we’re dealing with subjects charged with tremendous intensity and sometimes-inscrutable depth, areas in which answers may be hard to come by and choices could be easily questioned, particularly when brought under scrutiny by demanding outside sources. Under those kinds of circumstances, it’s no wonder someone like Alice, with limited life experience, might feel lost.

To grow comfortable with ourselves in these areas, we need to develop faith in our beliefs and trust their veracity. If they’re not right for us, we’ll discover that quickly enough, a signal that will tell us we’re on the wrong path and need to keep looking. But, by contrast, when they do feel right, we’ll know that, too, and likely just as fast. When we recognize that, we’ll know we’ve found what we were looking for. And this applies in virtually every area of experience, not just sexuality and spirituality.

Having come to this realization, we’ll also know how to assess the beliefs of others and their attempts to bombard us with them. We’ll be able to recognize the place, if any, that they hold in our own palette of beliefs. And, the more committed we are to our own convictions, the more we’ll be able to courageously stand up to those who assert viewpoints different from us. This is important for galvanizing ourselves in our own positions, enabling us to hold our own with others who would challenge us or try to unduly change our minds. Again, this is crucial with regard to our beliefs in any area of endeavor, but it’s especially critical for matters as personally intimate as sexuality and spirituality.

In the end, adopting such stances is essential for becoming our true, authentic selves. Allowing that portion of ourselves to come through is imperative if we hope to achieve satisfaction, joy and fulfillment in life, especially in such areas as our relationship with our bodies and our connection to the divine. And, when we see those manifestations realized, we may well be tempted to exclaim “Yes, God, yes” before grabbing for that requisite cigarette.

This charming and poignant teen comedy about a naive Catholic school girl who discovers the forbidden joys of sexuality in a generally unaccepting environment transcends the silly and unimaginative qualities often associated with films of this genre. Although the picture drags in a few spots and could stand to have been somewhat more daring at times, director Karen Maine’s debut feature serves up ample laughs without resorting to cheap tactics, often getting considerable mileage out of gestures as simple as facial expressions and other visuals that speak volumes. But, even more significantly, the film’s insights in other areas, such as judgment and self-determination, deliver spot-on messages that expose the hypocrisy and outright silliness often preached by organized religion. The picture’s superb ensemble cast, creative cinematography, impeccable editing and excellent background score add to the production’s many other fine attributes, making this release one well worth viewing. This smart, sexy, sweet offering is well deserving of all its accolades – not to mention a wide audience.

If everyone believed the same way in matters of sex and spirit, we’d have a much less colorful world. But just because we hold different viewpoints doesn’t mean we have to browbeat others into submission to get them to agree with us. In fact, when taken together, the various expressions of these issues combine to create a gorgeous mosaic, one to be admired for its beauty and diversity, the very qualities that make sexuality and spirituality such valuable and fulfilling aspects of our existence.