Skip to content
Home/Conscious Creation, Drama, Movie Reviews/‘The Cuban’ reminds us about making the most of life

‘The Cuban’ reminds us about making the most of life

Many of us tend to believe that we have all the time in the world, especially when we’re young. But, as we age and the days grow shorter, we quickly realize otherwise and seek to make the most of what’s left. However, if we’re unable to bring about such results for ourselves, we may not be able to achieve what we set out to do, adding to the frustration we’re already experiencing – unless, of course, we have help that comes to our rescue. Such are the conditions faced by an aging artist in the touching new drama, “The Cuban.”

At one time, Cuban jazz guitarist Luis Garcia (Louis Gossett Jr.) was one of the greats in his field, performing in nightclubs in Havana and New York with some of the most notable musicians in the business. But now, as he’s about to turn 80, virtually no one remembers him or his work. In fact, he leads a lonely existence in a Canadian nursing home, a dementia patient who spends much of his time staring off into space in a wheelchair, pumped full of antipsychotic drugs to squelch his cantankerous outbursts and keep him docile. But, even though he’s basically being merely warehoused, the staff still makes an obligatory attempt at attending to his basic needs, a generally thankless task assigned by Head Nurse Baker (Lauren Holly) to the newest support staff members. In this case, that’s nursing home aide Mina Ayoub (Ana Golja), a pre-med student who landed the job through her Aunt Bano (Shohreh Aghdashloo), a former physician and head administrator of the facility.

Despite the daunting task of caring for a difficult and often-withdrawn patient, Mina does her level best to find a way to get through to Luis. When Mina learns of his love of Cuban jazz, she sees a window of opportunity, given that she grew up with such music, a favorite of her grandfather with whom she spent much time while growing up in her native Afghanistan. And, even though Mina and her aunt left their homeland behind when they immigrated to Canada, their memories followed them, including Mina’s love of that lively music her grandfather played. 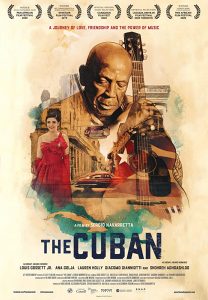 At first, Mina knows little about Luis’s past; she’s just glad to see him start coming out of his withdrawn state when she first hums some of the Cuban melodies and then later plays vinyl editions of them on an old record player. That, along with some clandestinely prepared traditional Cuban food smuggled onto his daily serving trays, works wonders to perk up his spirits and boost his level of physical activity. And, before long, Mina and Luis begin conversing about his past, both personally and professionally, a development that at least momentarily seems to forestall the further onset of his dementia.

Mina is so pleased with these results that the pre-med student begins investigating the impact of music in treating memory loss disorders. She’s encouraged by the findings she uncovers and subsequently steps up her efforts even more by securing a guitar for Luis, courtesy of her boyfriend, Kris (Giacomo Gianniotti). And, together with Kris, her cousin, Zahra (Shiva Negar), and her cousin’s beau, Ethan (Jonathan Keitz), they perform some of Luis’s favorite numbers, dressed in vintage Cuban garb, at the nursing home, a gesture that evokes big beaming smiles across his face. The performance also brings out Mina’s beautiful singing voice, a sign that maybe she’s destined to pursue something other than becoming a doctor, a dream that seems to be more important to her aunt than it is to her.

In taking these steps, however, Mina incurs disapproval from her superiors. Despite the success she’s had in caring for Luis, they believe she’s getting too personally involved. They’re particularly upset when she doesn’t follow the facility’s patient care protocols, most notably her unsanctioned food substitutions, a move that draws the ire of the staff dietician (Jeffrey R. Smith). It doesn’t matter to them that she’s trying to make an old man happy and improve his quality of life; she’s not following the rules.

With her feelings deflated, Mina begins to feel lost. She’s unhappy that she can’t help Luis as she’d like to. What’s more, her relationship with her family and her boyfriend begin to suffer, making matters worse. There must be something she can do, but what? That’s what she must figure out if she hopes to feel personally fulfilled – and to lift the spirits of an ailing old man whose condition may again be worsening, his time potentially running out.

As our days wind down, a question that generally comes to mind is, “How do we want to spend them?” It’s something often asked not only by those whose time is dwindling, but also by those who want the best for them. And, chances are, the answers are unlikely to involve things like endless lab tests, blander than bland food, mind-numbing medications and condescendingly insipid entertainment activities. After a life of fun and frolic, the last thing many of us want is an inane finale that’s about as exciting as a bowl of tepid porridge.

But how do we bring about an ending worth remembering, especially if we’re incapacitated and surrounded by well-meaning caregivers who think they know what’s best for us without realizing the tedium they’re unwittingly inflicting upon us? That’s where we have to draw upon the power of our beliefs to summon the results we want, the outcome that results from the conscious creation process, the philosophy that maintains we draw upon these resources in manifesting the reality we experience. That includes not only what we’re able to muster for ourselves, but also those whom we draw into our lives to act on our behalf when we can’t.

Consider the case of Luis. He’s obviously upset with the circumstances he’s been saddled with at the nursing home. It’s everything he doesn’t want. No wonder he’s become cantankerous and difficult to deal with. But, given his physical condition, what is he to do? He suffers from various ailments, such as heart trouble. And then there’s his mental state, characterized by a consciousness ravaged by the effects of dementia. He’s not in a position to change conditions on his own, no matter how much he might want to. He needs help, but that’s something he can realize for himself, even if he’s not consciously aware of it, by putting forth beliefs aimed at manifesting his aims.

Enter Mina. As a comforting, compassionate soul, she sees what Luis wants and needs, and she makes the effort to help. She believes in providing the necessary assistance and works to bring it about, even if it places her job in jeopardy. In turn, she summons forth the aid she needs to fulfill that goal, drawing upon the help of Kris, Zahra and Ethan, as well as one of Luis’s former colleagues, Clarita (Tabby Johnson), and her friends. It’s a beautiful, jointly wrought co-creation that brings joy to someone so craving it, as well as fulfillment to those who help supply it.

That fulfillment achieves several valuable objectives. To begin with, it gives the providers of that satisfaction something about which they can feel genuinely proud. But there’s more to this than just doing good; there’s also the reminder that we must cherish the time we have in this existence, given how quickly it tends to pass us by. Even those of us who are just starting out our lives can benefit from such a tap on the shoulder, to remember to prize each moment, never squandering them or taking them for granted.

Hints of this come up routinely during the film. Such is the case, for example, for Aunt Bano. Despite her training as a physician back in Afghanistan, she’s no longer accredited to practice as such in Canada, which is why she has been relegated to acting as a nursing home administrator. It’s a ruling that has troubled her ever since she arrived in her new homeland, one that’s left her embittered and feeling separated from her calling. However, as Mina reminds her, there’s no reason why she can’t enroll in a scholastic program that will bring her into compliance with Canadian regulations. And, considering her background and comparatively youthful age, she’s talented, experienced and young enough to avail herself of such an opportunity. But only Bano can make the decision to move forward with that plan, one that rests with her beliefs, ambitions and faith in herself. She must ask herself, “Can I indeed do this?” – and then believe whether or not she can.

Mina and Zahra face similar choices, decisions that again rest with their beliefs. As noted earlier, the emergence of Mina’s singing voice certainly raises legitimate questions about her looming medical career. As for Zahra, who dearly loves Ethan, she must stare down the prospect of an arranged marriage set up by her parents (Kane Mahon, Layla Alizada) to a suitor she’s never met. Will the cousins stick to the paths that are expected of them, or will they follow their hearts and tap into the beliefs that they think best for themselves? Again, the sooner they remain true to their authentic selves, the sooner they’ll be able to maximize the fulfillment they seek in the time they have. And to think that all this comes about through the influence of an aging musician who simply wants to enjoy the days that remain.

This bittersweet tale of an aging jazz musician and the young nursing home attendant who seeks to help him revive his memories of his storied past serves up a warm and touching story with great visuals, a saucy soundtrack and an excellent lead performance by Louis Gossett Jr. Although occasionally formulaic and predictable with a few too many story threads, the picture nevertheless entertains while reminding us all of making the most of what time we’ve each got. The film packs a lot into its runtime, but it gives us much to ponder about ourselves. “The Cuban” is available in limited theatrical and drive-in release, as well as for limited online streaming, but this delightfully colorful and pleasant offering is worth the search.

In an age when callousness and self-interest often take precedence over anything else, it’s heartening to see a story that celebrates kindness and selflessness, especially toward someone like Luis, who’s unable to attend to himself as capably as he might like. But that doesn’t mean he doesn’t have needs, wants and desires that require attention. Which is why the efforts of caring souls like Mina mean so much, not only to those they care for, but also, one hopes, in helping to reshape our reality by enabling those in need to make the most of their lives, no matter how much or how little time they have left. If we were all to adopt beliefs that make such outcomes possible, we might well have a very different world – and a very different quality of life in it. It’s an investment that doesn’t require much from us but pays off far more handsomely than any of us might realize.