Skip to content
Home/Conscious Creation, Drama, Movie Reviews/‘The Guilty’ asks, ‘How much help is too much?’

‘The Guilty’ asks, ‘How much help is too much?’

The well-meaning among us no doubt want to do all we can to aid those in need. But is it possible for there to be too much of a “good” thing? In an effort to be of service, there’s always the possibility we can go too far, making a difficult situation worse than it needs to be. Such is the challenge faced by an idealistic first responder in the gripping Danish drama, “The Guilty” (“Den skyldige”).

Copenhagen Police Officer Asgar Holm (Jakob Cedergren) is frustrated by his job. He’d like to be back on the street, doing the kind of police work that he so loves. But, since he’s currently on probation for an incident under investigation, he’s been reassigned to work the phones at the city’s Emergency Services office. Asgar is bored answering calls like that from a mugging victim (Morten Suurballe) who had his personal property stolen by a street walker in Copenhagen’s red light district, a neighborhood the caller innocently claimed to know nothing about. Then there’s a drunk woman (Caroline Løppke) who makes no sense about why she’s calling, a brief but irritating conversation that works Asgar’s last nerve. And then there’s a plea from a junkie (Simon Bennebjerg) who’s seeking help but can’t bring himself to provide the information Asgar needs to get him proper assistance. It’s enough to fray his otherwise-calm and collected demeanor.

Thankfully, there are a few distractions, such as phone exchanges with Asgar’s buddy Bo (Jacob Hauberg Lohmann), an old friend who works as a dispatcher in the Services’ Copenhagen office. Asgar also takes calls from his street partner, Rashid (Omar Shargawi), a voice he’s pleased to hear. The substance of these calls may not be what Asgar wants to hear – discussions about an upcoming hearing regarding the incident that placed him on probation – but they at least break the tedium of the calls he’d rather not deal with. 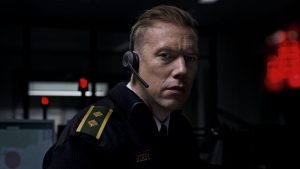 Copenhagen Police Officer Asgar Holm (Jakob Cedergren), on probation for a work-related incident, spends his days working the phones in the city’s Emergency Services office, a job that frustrates a professional who wishes he was back out on the streets, in director Gustav Möller’s gripping psychological thriller, “The Guilty” (“Den skyldige”), available in various home viewing formats. Photo courtesy of Magnolia Pictures.

Circumstances take a sudden turn, however, when Asgar receives a call from a young woman named Iben (Jessica Dinnage). Asgar is puzzled by what she says; she sounds more like a sex line worker who specializes in a mothering fetish than someone genuinely in trouble. However, he quickly realizes that she’s caught up in a situation where she can’t talk and that she’s pretending to speak with her daughter. Asgar launches into a line of questioning to find out what’s going on.

As it turns out, Iben has apparently been kidnapped by her husband, Michael (Johan Olsen), an ex-convict with a history of violent assault. They appear to be in a van headed out of town toward the City of Elsinore in the North Zeeland district. And, even though they appear to be moving away from Copenhagen, Iben is concerned about the safety of her two children, who have been left alone at home. Given her husband’s record, it would appear she has cause for worry.

Asgar contacts a local dispatcher (Jeanette Lindbæk), who takes down the information he’s compiled. She assures him that her staff will handle matters from there. However, given the gravity of the situation, Asgar can’t bring himself to leave matters alone, despite the local dispatcher’s reassurances. What’s more, since his shift is coming to an end, he’s told to go home and let his colleagues field any new local developments that arise; with his hearing coming up the next day, they tell him to go get some much-needed rest before the proceeding – advice that he promptly ignores.

Staying on the phone, Asgar makes further inquiries, such as with Iben’s young daughter, Mathilde (Katinka Evers-Jahnsen), who tearfully provides more background about what went on in the house before her parents left. He arranges for child care services personnel to visit the house and forwards the additional information to the North Zeeland dispatcher, who wonders why he’s still working a case that he was told to leave in their hands. 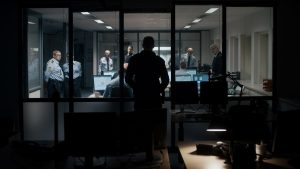 The Copenhagen Emergency Services office is the site of a gripping drama that plays out entirely over the phone in writer-director Gustav Möller’s psychological thriller, “The Guilty” (“Den skyldige”). Photo courtesy of Magnolia Pictures.

So why is Asgar so determined to stay involved? Having learned about Michael’s history and after hearing Iben’s frightened and woeful voice, his compassion comes rushing forth. He believes he’s figured out what’s transpiring, and he wants to make a difference, something he feels he hasn’t been able to do ever since he’s been placed on probation. He doggedly keeps working the case, even reluctantly dragging Rashid into an investigation that’s now verging on employing legally and ethically questionable tactics. He desperately wants to see justice done.

But is Asgar truly following the right course with his behavior? Does the end justify the means? And what if everything is not what it seems – then what? As this tense scenario plays out, the idealistic officer may find himself embroiled in something far more complicated than he ever imagined, a situation that carries consequences he never envisioned. And, for viewers, it’s a riveting experience, since virtually the entire drama plays out over the phone within the confines of the Emergency Services headquarters, the characters’ voices carrying the story through its many emotional contortions.

For his part, Asgar truly is a deeply committed, compassionate person who’s trying to bring that part of himself out through his work. That’s why he’s so frustrated in his current capacity; he believes he’s not able to apply himself as effectively as he would if he were back out on the streets. So he bides his time, endeavoring to be as compliant and cooperative as possible until he’s allowed to resume his normal routine. But, despite his intent to do so (half-hearted though it may be), he has difficulty following protocol, especially when he’s confronted with a situation like the one involving Iben. He so desperately wants to help that he can’t stand on the sidelines, even if overstepping his bounds complicates his circumstances further.

Asgar believes he can make a difference, so much so that it governs his actions. Those beliefs play a vital role in how events unfold, a process that materializes in line with the principles of conscious creation, the philosophy that maintains we draw upon these resources in manifesting the reality we experience. And, even if he has never heard of this practice, that’s what Asgar is nevertheless so eager to see play out.

When tempered with wisdom, it’s entirely possible to see our objectives realized. But there’s another side of the coin; if allowed to become overrun by overzealousness and/or a myopic point of view, we can set ourselves up for trouble, no matter how earnest our underlying intents may be. This is the point where we may fall prey to the practice of un-conscious creation, a process whereby we seek the fulfillment of our goals at any cost, regardless of the means we employ for achieving them or the consequences that can result. Such situations can bring unintended fallout and distorted aspirations, sometimes with tragic outcomes. 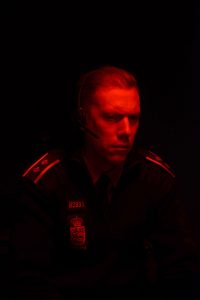 As he overhears the unfolding of a possible kidnapping, Copenhagen Emergency Services responder Asgar Holm (Jakob Cedergren) plunges into the depths of emotion in the riveting drama, “The Guilty” (“Den skyldige”), available in various home viewing formats. Photo courtesy of Magnolia Pictures.

As much as Asgar believes he has circumstances figured out, and as thoroughly convinced as he is about what needs to be done, he’s so fixated on what he seeks to achieve that his vision – and the beliefs that drive it – could well become clouded. He’s unable to seek through the camouflage that has come to obscure his view. And allowing that to happen can cause our perspective to become obstructed, no matter how noble or compassionate we may think we are.

When we set off on such a path, we may quickly find ourselves having to engage in some serious mopping up activities. Escaping such circumstances can be tricky, too, with much depending on how we approach the situation. Should we rigidly stick to our convictions, we’re likely to dig ourselves into even deeper holes. But, if we make the effort to examine things honestly, we may be able to at least stop the bleeding, if not turn conditions around. That might not be easy, but it would certainly be in line with our personal integrity, which can go a long way toward making matters right. It could even lead to redemption, which could offer a new start for ourselves, as well as those impacted.

As Iben’s story unfolds, Asgar has an opportunity to see how the foregoing dynamics work in a situation like this. However, it also provides him with a lesson that transcends the handling of the current crisis; it gives him insight into his personal circumstances, most notably how to approach his upcoming hearing. And that, in the long run, may prove to be a more valuable learning experience than he ever thought possible.

This chilling tale serves up a taut, edge-of-your-seat psychological thriller about one man’s valiant efforts to aid in the investigation of a possible kidnapping under circumstances where the entire story is far from clear. Told through a series of phone conversations between the officer and his colleagues, the victim and the alleged perpetrator, writer-director Gustav Möller skillfully relies on the sound of his performers’ voices to drive the narrative, forcing viewers to use their own imaginations to visually fill in the gaps, an expert use of Hitchcock’s rule if there ever were one. The result is a harrowing journey into the minds of the characters, as well as the viewers’ own minds, aided by a script loaded with unexpected twists and turns. This captivating offering reaches out and grabs the audience’s attention, never letting go, despite its simple, play-like staging, presenting a gripping story that only gets better the further along it goes. This vastly underrated cinematic knock-out is available for home viewing in a variety of formats. 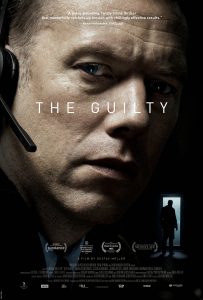 While “The Guilty” may not have attained widespread notoriety, it certainly captured the attention of critics, film festivals and awards competitions, taking home nominations and honors in a variety of milieus. Of particular note, the picture was named one of 2018’s top foreign films by the National Board of Review. In addition, the film was named the Audience Award winner in the World Cinema – Dramatic category at the 2018 Sundance Film Festival, a competition in which it also earned a Grand Jury Prize nomination. But those accolades tell only a part of the story behind the recognition for this well-received, if little-known, offering.

They say there’s a Samaritan in all of us, and that’s comforting to know, especially in an age like ours, where we can use all of the help and cooperation we can get. However, if we allow our convictions to get the better of us, we run the risk of becoming obsessive, even fanatical, and, as history has shown us so many times – including today – that does no one any good, either. Asgar’s story provides us with a cautionary tale that we’d be wise to heed if we want to help our fellow man without creating havoc in the process, showing us that there genuinely are times when “good enough” is indeed “good enough” – even if it doesn’t always seem that way.