‘Song Without a Name’ pleas for justice, reform

Life in a land riddled with injustice, intolerance and inequality – conditions that many of us can relate to these days – is ripe for change. But the birth pangs of bringing about such reform are often as difficult to endure as the problems that sparked their institution. And, to complicate matters further, these ordeals are often felt both across society and personally, compounding the pain and suffering experienced at the individual level. So it once was for a troubled Latin American nation and its citizens as seen in the new fact-based drama, “Song Without a Name” (“Cancíon sin nombre”).

Peru was a nation beset by many problems in the 1980s. Volatile political turmoil, accompanied by terrorist activity, rampant corruption and runaway inflation, made coping with everyday life difficult, dangerous and expensive, especially for the poor. Those who lived in the country’s rural mountainous regions, such as the native Quecha villagers, had it particularly hard, barely eking out a living selling vegetables and other basic commodities. What’s more, their limited educational backgrounds made it easy to take advantage of them. For example, they were readily hustled by unscrupulous employers who convincingly talked them into underpaying jobs or joining radical groups under the promise of “finding work.” But these employment scams and terrorist recruiting tactics were far from the most horrendous atrocities being perpetrated at the time, as a 20-year-old expectant mother, Georgina Condori (Pamela Mendoza), would come to find out for herself. 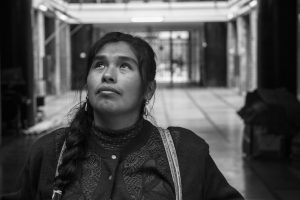 Expectant but destitute mother Georgina Condori (Pamela Mendoza) believes she’s found the answer to her prenatal care needs when she comes upon a free clinic in economically ravaged Peru in the 1980s in the dramatic new fact-based saga, “Song Without a Name” (“Cancíon sin nombre”). Photo courtesy of Film Movement.

Georgina’s story, based on actual events, is indeed a tragic one. To make ends meet, she sells potatoes in a village market, while her partner, Leo (Lucio Rojas), does whatever he can to earn money, no matter how shady the propositions. However, given their limited income and the ever-increasing cost of everything, Georgina quietly worries about what will happen when she gives birth. As it is, she can’t even afford prenatal care.

But, while working at the marketplace one day, Georgina receives what she believes is the answer to her prayers. She hears a radio ad for a clinic in Lima that offers pregnant mothers free obstetric services. She sees this as a perfect opportunity to get the care she needs.

Georgina makes the trip to Lima to visit the clinic, where she’s examined by a doctor (Boris Severola) who tells her that she and the baby both appear to be perfectly healthy. He then tells her that all she need do is come back when she’s ready to deliver. And, a few days after returning to her village, she goes into labor. She makes the arduous and now-painful journey back to Lima, where she gives birth moments after arriving at the clinic. Exhausted from her trip and the birthing process, Georgina is encouraged to rest while the staff attends to the newborn. But, when she awakens from her rest, her baby is nowhere to be found. Georgina asks to see the child, but she’s told that the baby girl has been taken to a hospital to ensure her health – a story that proves to be an outright lie. And, when the new mother pushes the issue, she’s rushed out of the clinic by the staff “nurses” (Yiliana Chong, Janet Gutarra), told that she has to go home.

Distraught and inconsolable, Georgina doesn’t know what to believe. She makes repeated visits to the clinic, which is now apparently shuttered. She approaches authorities, nearly all of whom either dismiss her as delusional or obligatorily take her statement with no intention of pursuing the matter. And Leo is of little help, doing little more than paying lip service to his partner’s anguish. Finally, and in an act of desperation, Georgina visits the offices of the newspaper La Reforma in hopes that someone will listen to her story. 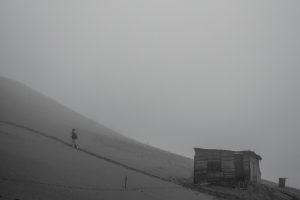 Life in Peru’s rural mountainous regions may be beautiful to look at but difficult to manage, especially for the nation’s poor indigenous villagers, as seen in director Melina León’s feature debut, “Song Without a Name” (“Cancíon sin nombre”). Photo courtesy of Film Movement.

Although initially treated dismissively, Georgina’s story gets the attention of reporter Pedro Campos (Tommy Pàrraga). He takes pity on the young mother, realizing that she’s being victimized by a self-serving society lacking in compassion and basic morality. He understands her situation, because, like Georgina, Pedro is part of a marginalized community himself: As a gay male who lives a largely closeted life in the face of an extremely homophobic culture, he feels disenfranchised, unable to be himself or to explore his budding relationship with a flamboyant actor, Isa (Maykol Hernández). Together, Pedro and Georgina begin looking into what happened to her baby.

Before long, Georgina meets two other women who experienced similar fates, Sara (Jhazmin Mamani) and Josefina (Lourdes Villareal). They describe appointments at free clinics not unlike the one Georgina visited, attended to by a doctor matching the description of the physician who took care of her. And they go on to tell how their newborns were mysteriously taken from them, without explanation, shortly after their births. Based on this information, as well as leads from other sources, Pedro uncovers an infant trafficking business, one in which babies are sold to overseas parents looking to adopt, all with the assistance of a complicit judge (Carlos Victoria). Pedro’s coverage of the story publicly exposes the ring, but, even with that, a crucial question still remains: What happened to Georgina’s daughter?

Surviving conditions like those that prevailed in Peru in the 1980s is never easy, no matter where one may live. The political, social and economic turbulence that permeated virtually every aspect of everyday life was itself patently unsettling. But, when personal tragedies like the one Georgina faced are added to the mix, they make life innately intolerable. How does one cope? Indeed, why must someone endure such excruciating circumstances? 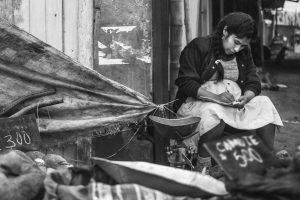 The philosophical among us would assert that there are always reasons (albeit not readily apparent) for undergoing such experiences. But others are just as likely to contend that no one should have to suffer fates like this. So why do such tragic misfortunes occur?

Situations like these desperately demand justice and reform. No one should have to endure such indignities. But, if conditions are to ever change, they must be brought into the light of day for all to see, and those caught up in such scenarios must have the wherewithal to expose them for what they are. Bringing such outcomes into being takes considerable courage and effort, initiatives that call for a firm belief in one’s convictions to make that happen. And the power inherent in those beliefs is important, for it drives the manifestation of hoped-for results, products of the conscious creation process, the philosophy that maintains these metaphysical building blocks shape the reality we experience.

As Georgina and Pedro work to uncover the truth of her baby’s disappearance, they put their heart and soul into their work. They fervently believe that they can achieve what they set out to do, with a commitment to see it through. And, even if they have never heard of conscious creation, it’s obvious that their efforts embody the philosophy’s principles and that they have a mastery over them as they proceed with their venture. That’s crucial in light of what’s on the line, both on a personal level (i.e., locating the missing children) and on a grander scale (i.e., bringing about much-needed justice and reform for society at large). 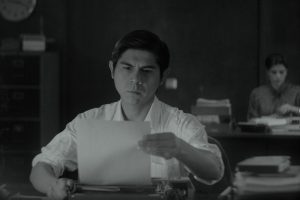 Journalist Pedro Campos (Tommy Pàrraga) seeks to expose corruption through his work with La Reforma newspaper during Peru’s politically and economically turbulent times in the 1980s in “Song Without a Name” (“Cancíon sin nombre”). Photo courtesy of Film Movement.

To be sure, the intrepid investigative duo has their work cut out for them, given how skillfully the traffickers have concealed their scheme and the logistics that make it work. For instance, by constantly shifting the locations of their clinics, they manage to stay ahead of inquisitors and victims, an effort fortuitously aided by the complicity of corrupt authorities. They also manage to sustain quite a “market” for their precious commodity by deceitfully yet successfully convincing adopting parents overseas that they have an ample number of children available for placement, young ones who have been “orphaned” by the deaths of family members killed in terrorist incidents and other calamities. And the criminals are so firmly rooted in their beliefs in these notions that they’re able to get away with it. Most of us would be appalled by this utter perversion of the conscious creation process, yet its ongoing materialization nevertheless demonstrates the tremendous power inherent in our beliefs and what they can make possible, for better or worse.

As the film depicts, this is a story that calls for change on multiple fronts. Not only does it plea for breaking up the trafficking ring and appeasing the sorrow of victims like Georgina, Sara and Josefina, but it also exposes the ugly homophobic hatred inflicted upon Pedro and Isa, victims of an intolerant, out-of-control uber-macho culture. Both situations call for the plights of the disenfranchised to be addressed, to institute protections for those most in need of it. And, by calling attention to such disgraceful social ills, champions of their reform have an opportunity to enlighten the public and push for change. 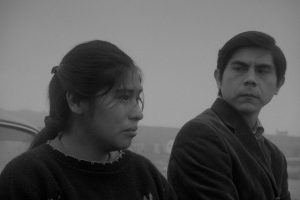 It’s because of horrendous circumstances like these that those seeking to change them must invoke and ardently commit to beliefs aimed at bringing about meaningful justice and reform. This is true in any situation where such change is called for. By having the courage and conviction to follow through with what it takes to realize that outcome, we have an opportunity to eradicate such atrocious circumstances. The example they set is one that can indeed inspire us all when faced with ordeals in need of comparable rectification.

This fact-based but atmospheric tale of Peru’s political, social and economic turmoil of the 1980s provides a unique take on a shocking news story told from a highly personal, exceedingly inventive perspective. With an excellent lead performance by Pamela Mendoza, gorgeous black-and-white cinematography and an ethereal original score, director Melina León’s debut feature tells a captivating story all its own while simultaneously paying homage to Latin American political thrillers (most notably Chilean-based offerings like “Missing” (1982) and “Spider” (“Araña”) (2019)), as well as tales of minority disenfranchisement and exploitation (such as Mexico’s “Roma” (2018)). Admittedly, the film could use a little more back story for context, and it sometimes tries to do a little too much, with some story threads not fleshed out as thoroughly as they could be. Overall, though, this is a fine initial offering from another promising new talent, a filmmaker who clearly demonstrates a great deal of vision and imagination in telling a story that could have easily been presented much more conventionally in lesser-skilled hands. The film is available for first-run online streaming. 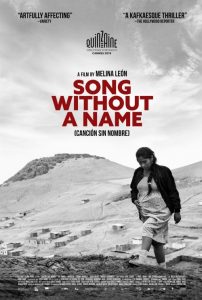 Implementing justice and reform is often a difficult and frustrating process. The problems that prompt these initiatives are often so insidious, so entrenched and managed by forces that are so imperceptible that even the most zealous advocates of these efforts are often on the verge of becoming discouraged. Yet, considering the stakes involved, it’s also just as hard to walk away from these campaigns, no matter how Quixotic they may seem. It’s at times like these when the truly committed must steel their resolve, digging deep down into the recesses of their beliefs to see matters through so that those in need of the fundamental fairness they lack may have access to it, all thanks to those who have the courage and fortitude to never give up.