‘Tully’ nudges us to look at life’s choices

Have you ever felt so overburdened by your circumstances that you didn’t know which way to turn first? The workload is so great that you can barely keep up, yet everything has to get done, even when you don’t feel like doing it. Such conditions can be demoralizing, so much so that you stop taking proper care of yourself and even come to resent your own life. If you can appreciate that, you’ll be able to relate to the everyday routine of an overwhelmed mother of three watching her life slip away from her in the touching but brutally honest new comedy-drama, “Tully.”

Marlo Morrow (Charlize Theron) has two kids, Jonah (Asher Miles Fallica), a special needs child, and Sarah (Lia Frankland), a sweet but sensitive eight-year-old. Mom adores the two youngsters, but caring for them can be a handful, especially where Jonah is concerned. She receives some help from her husband, Drew (Ron Livingston), but, as the primary breadwinner, he works long hours to support the family. And, if all of that weren’t enough, Marlo is about to give birth to baby no. 3. 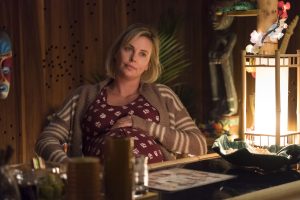 Marlo Morrow (Charlize Theron) feels put upon by the circumstances of her life as a mother of three in the touching new comedy-drama, “Tully.” Photo by Kimberly French, courtesy of Focus Features.

Considering the burden she’s carrying, Marlo is seriously weighed down by her life (pregnancy weight notwithstanding). She’s perpetually tired and feels that her needs are rarely, if ever, met. And, with the blessed event now just days away, circumstances are about to become that much more onerous.

Concerned for his sister’s well-being, Marlo’s wealthy brother, Craig (Mark Duplass), poses an intriguing proposal. As a gift for the new baby’s arrival, he offers to hire a night nanny to care for the child so that Marlo can at least get a good night’s sleep. He tells Marlo about the world of good hiring such a caregiver did for his wife, Elyse (Elaine Tan), when she had her children, and he encourages his sister to take him up on the offer. Marlo doesn’t share Craig’s enthusiasm, though. She’s not sure how she feels about a stranger nurturing her child when she should be the one doing so. What’s more, given traditional expectations about motherhood, she believes that she should be able to take care of things by herself, no matter how unrealistic or outdated that notion might be.

Once the baby arrives, Marlo tries to go it alone but soon finds herself overwhelmed. She decides to give the night nanny concept a shot. And, before long, the new caregiver, Tully (Mackenzie Davis), arrives.

At first, Marlo doesn’t quite know what to make of her new service provider. The bubbly but enigmatic twenty-something seems to possess a boundless amount of energy, as well as an unlimited capacity for nurturing, without ever showing any signs of stress. She also seems to have a special wisdom, specifically advising Marlo that she needs to take care of herself as much as she tends to her children. Yet, because it’s been so long since she did anything like that for herself, Marlo almost doesn’t seem to know how. However, with a little “practice,” she grows comfortable with these “foreign” feelings and begins slipping into a new routine where she looks after her own concerns as much as those of the kids. 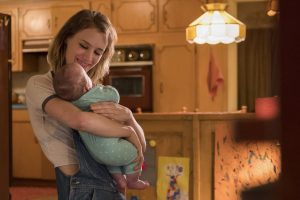 The relationship between Marlo and Tully gradually evolves. Marlo comes to see the nanny as someone who cares for her as much as she does for the newborn. Tully attends to tasks like the oppressive housework Marlo never seems to have time to address and bakes cupcakes for Jonah’s classmates. But, beyond that, Tully helps out Marlo with her own personal needs, like pampering herself, finding ways to have fun again and even reigniting the long-dormant romance between Mom and Dad. It’s as if Tully has an uncanny insight into how Marlo’s mind works, and she always manages to come up with the solutions Mom needs.

As time passes, Marlo and Tully become more like friends than employer and employee. Tully makes it possible for Marlo to open up about herself, her life and her feelings. This raises a host of issues that the middle-aged mother has been ignoring or suppressing for a long time. It pushes her to confront emotions that have obviously been troubling her but that she’s been burying under the more immediately pressing needs of changing diapers and getting the kids to school on time. So what starts out as an arrangement to help Marlo get a good night’s sleep turns into a profound journey of personal exploration, one that forces her to examine how her life was, how it has turned out and where she would like it to go. And, as it all plays out, this process takes a number of unexpected twists and turns that will surprise the audience as much as it startles the evolving protagonist. 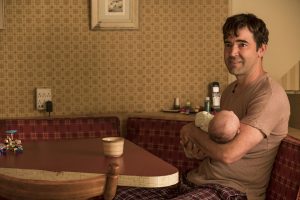 New father Drew Morrow (Ron Livingston) pitches in when he can in the new comedy-drama, “Tully.” Photo by Kimberly French, courtesy of Focus Features.

Given the foregoing, anyone who has experienced circumstances like Marlo’s can surely appreciate what she’s going through. But, at the same time, one can’t also help but have a Talking Heads moment and rhetorically ask, “Well, how did I get here?” That’s especially true if one has a sudden flash of insightful brilliance where there’s an instant – and perhaps somewhat shocking – awakening to the conditions of the moment. The fallout from such a realization can be devastating, especially when one has lost sight of how those conditions arose in the first place.

When such circumstances arise, it’s usually because we’ve put our lives on autopilot, essentially tuning out our consciousness and letting our existence unfold as it will. We may have occasional glimpses of awareness of who we are and where we’re going, but we’re usually so caught up in the day-to-day minutiae that we lose sight of the bigger picture, including the way in which it takes shape. Yet, whether or not we’re aware of it, we continue to play a role in what transpires, even if it doesn’t seem that way, through the practice of un-conscious creation, a default-driven variation on the conscious creation process, the means by which our reality manifests through the power of our thoughts, beliefs and intents. And, given where Marlo’s at, it’s apparent she’s deep into this potentially pitfall-ridden practice – that is, until she’s shaken out of it by the arrival of the enigmatic new caregiver.

Flashes of awareness like those Marlo experiences often emerge when we reach the point where we find our prevailing circumstances intolerable. Things become so insufferable that something’s got to give. And, based on what the protagonist goes through after the birth of her third child, that’s all too clear. Change is needed – and fast. 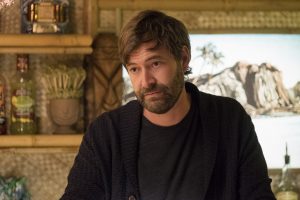 A concerned brother, Craig (Mark Duplass), seeks to help his overburdened sister with the impending arrival of a new baby in the touching new comedy-drama, “Tully.” Photo by Kimberly French, courtesy of Focus Features.

This is how and why Tully appears in Marlo’s life. Even if the middle-aged mom isn’t aware that she’s drawn this healthy new influence into her life, she’s certainly done so – and at just the right time. In addition to attending to the immediately pressing needs of caring for a newborn, Tully takes care of Marlo, helping her care for herself in ways that she hasn’t for a very long time. And, once refreshed, Marlo is sufficiently rejuvenated to address the issues that she’s set off to the side for far too long, namely, assessing the state of her life and how it has taken its current form.

As Marlo conducts that assessment, she looks to her newfound friend for inspiration. In many ways, Tully mirrors the attitudes and outlooks of Marlo’s younger self, someone whom the protagonist lost sight of years ago. The cheerful, caring free spirit reminds Marlo of when she was in her 20s, living a fun-filled, freewheeling life unburdened by the often-mundane responsibilities of packing school lunches and shuttling kids to extracurricular activities. But Marlo can’t remember the last time she engaged in pursuits like going out for drinks or even having sex with her husband. When did that part of herself disappear? And is she satisfied with what she’s replaced that life with?

Having a confidante to talk to about these topics helps immeasurably. Tully shows Marlo how to enjoy life again. But, even more than that, Tully helps her older counterpart take a serious look at the life she’s created to help her decide if it’s what she really wants for her future. This, in turn, helps Marlo examine the underlying beliefs that have brought all this into being. It prompts Marlo to ask herself questions like, “Is this what I want?”, “Do I want to go back to what I had?” or “Can I come up with a compromise that fuses the two?” In some ways, whatever she decides is almost irrelevant; what’s most important is her reawakened awareness to how she gets the life she experiences, because, in the end, she can exercise any of the foregoing options, depending on whatever choices she makes and whatever manifesting beliefs she embraces.

At first glance, “Tully” comes across as a no-holds-barred look at contemporary motherhood, and anyone who has gone through such an experience can probably relate to it. But, as the story moves forward, it takes on issues that anyone who has ever reflected on the unfolding of his or her life can undoubtedly appreciate, regardless of whether or not they’ve gone the parental route. It deftly delves into questions of the choices we make, the particulars of the lives we decide to lead and whether or not we’re satisfied with what we’ve ended up with. Did we get what we want? Did we get diverted? Is our experience everything we hoped for, or did we “settle?” That’s a lot to ponder, and the film covers these issues with a curious mixture of amazing depth and honest practicality. 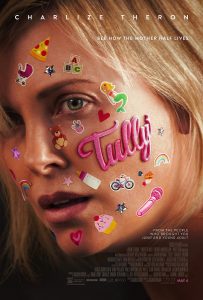 This refreshingly pleasant offering delivers a wealth of heartfelt feelings and ample gentle humor in a comedy-drama that’s both brutally frank and full of surprises. Theron delivers yet another outstanding performance – easily one of the first award-worthy portrayals of 2018 – in a multifaceted role that’s not everything it initially appears to be. The film’s excellent script and uniform pacing – elements not always present in the works of director Jason Reitman and screenwriter Diablo Cody – make for captivating, thoughtful viewing that’s likely to touch viewers of all stripes, not just those whose stories seemingly resemble those of the protagonist. Don’t miss this one.

Life sometimes passes us by faster than we realize – or than we might like. Before we know it, we suddenly find ourselves 20 years older, having left parts of ourselves behind to suit the needs of a present very different from what we might have once envisioned. Are we happy with our decisions, or are the burdens that have resulted more than we can handle? It’s times like that when we need someone like Tully to come into our lives to help take care of us, to enlighten us to our own selves and to help us see more clearly than we may have seen in years.