There’s nothing like a good friend. The value of associating with someone who cares deeply for you, and who has your back at times when it really counts, can’t be overestimated. And it can be especially satisfying when that friendship arises from an unexpected companion. So it is with a seemingly mismatched duo in the new, fact-based road trip buddy movie, “Green Book.”

Tony “Lip” Vallelonga (Viggo Mortensen) needs a job. The married father is put out of work when the New York nightclub where he works as a dapper bouncer announces plans to close for two months to undergo renovation. Unsure of what to do, Tony weighs his options, but there aren’t many viable work opportunities for an unemployed (and largely unskilled) job seeker looking to earn what it takes to support his wife, Dolores (Linda Cardellini), and his two sons, Nick (Hudson Galloway) and Frankie (Gavin Foley). And given that one can only rely on gambling and other dubious money-making schemes for so long, Tony has to find something to hold him over until the Copacabana reopens. 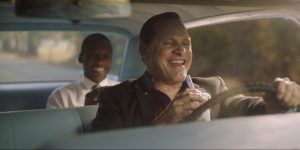 With few prospects looming, Tony receives a call out of the blue about an opening for a job as a driver, something at which he’s relatively experienced. But the assignment turns out to be far from what he expects. Instead of making deliveries or chauffeuring passengers around town, he’s asked to be the driver for an accomplished African-American pianist, Dr. Don Shirley (Mahershala Ali), who’s about to embark on a concert tour of the American South. Tony would be responsible for transporting his passenger to his various concert dates, as well as a number of other miscellaneous tasks. And, given that he would be driving a Black passenger through this still-segregated region – an inescapable fact of life in 1962 – he would also be responsible for providing whatever “muscle” is called for to protect the accomplished virtuoso from the assorted rednecks and bigots they might encounter along the way. It’s a job duty that’s not specifically spelled out, but, considering that Tony’s a street-smart Italian-American from The Bronx, it’s assumed that this is something he’ll have no trouble handling.

At their first meeting, Tony and Dr. Shirley (whom Tony calls “Doc”) come across as an unlikely duo. Tony is earthy, unpretentious and a little salty. Doc, by contrast, is highbrow, erudite, persnickety and quick witted. But they also have traits in common – they’re both no-nonsense, demanding and clear about what they want. They also have their own “deficiencies” – Tony is often tactless and ill-mannered, while Doc is so aloof that he’s frequently clueless to the ways of the everyday world. And, given that Tony comes from a community not exactly known for its tolerance and open-mindedness at the time, it’s unclear how well he’ll get along with someone from a background for which he’s long harbored a less-than-subtle prejudice.

Bouncer Tony “Lip” Vallelonga (Viggo Mortensen) needs to find a new job when the nightclub where he works closes for renovation, as seen in the new fact-based comedy-drama, “Green Book.” Photo courtesy of Universal Pictures, Participant Media and DreamWorks.

Tony’s also concerned about being away from his family for eight weeks. He worries that he’ll miss Dolores and the kids, and he’s uneasy that he might not be back home in time for Christmas. However, the promise of steady work for the entire term of his layoff, coupled with good money, proves to be too good to pass up. And so, in no time, Tony and Doc, along with fellow musicians Oleg (Dimiter D. Marinov) and George (Mike Hatton), hit the road for an odyssey that turns out to be quite eye-opening for all concerned.

To help them navigate their way through such unfamiliar territory, a representative of Doc’s record label gives the duo a copy of a special guide, The Green Book. This handbook contains listings of safe lodging, dining and business options for African-Americans in the age of Jim Crow laws, directing its readers to places where they will not be refused service, humiliated or threatened with violence. It’s a document that will come in quite handy for those times when Tony and Doc are forced to stay at different hotels or eat at different restaurants, a common practice during the age of segregation. 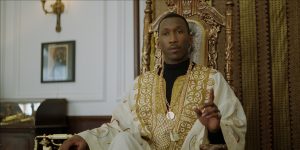 As he readies to embark on a concert tour of the Deep South in 1962, pianist Dr. Don Shirley (Mahershala Ali) needs a driver to take him to his performance dates, as chronicled in the new, fact-based biopic, “Green Book.” Photo courtesy of Universal Pictures, Participant Media and DreamWorks.

Given the social and racial conditions of the time, Tony and Doc routinely encounter instances of the kinds of prejudices one would expect when traveling through the Deep South, incidents that get handled in various ways and resolved with varying degrees of success. But there are also a number of unexpected developments to come out of the trip, such as Doc bringing culture to someone who had never been exposed to it. Likewise, Tony gives his passenger an education in streetwise ways, as well as an introduction to many of the ways of everyday African-American life, something that the well-educated (but obviously sheltered) Doc had never experienced firsthand. It’s an exchange that proves to be quite enlightening for each of them – and that helps to forge a strikingly strong bond (and genuine friendship) between them, especially when each of them has to rely on the other for support and guidance through tricky or trying circumstances. And, based on how things started out, who would have thought that such an outcome would be possible? 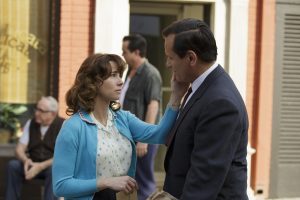 But, then, pushing past preconceived limitations is one of the results made possible by the conscious creation process, the philosophy that maintains we manifest the reality we experience through the power of our thoughts, beliefs and intents. It’s unclear if Tony or Dr. Shirley ever heard of this notion, but, based on how events transpired in their lives and relationship, it’s clear to see how it can work.

That’s especially true in light of where each of them started when their odyssey together began. Tony and Doc were, in many ways, worlds apart from one another, and their pairing for an eight-week road trip seemed questionable from the outset. However, as they interacted with one another and saw how each could benefit from the other’s presence, they formed that fast friendship that made their relationship work.

Such successful collaborative efforts are the basis of co-creation, where we pool our energies and efforts to forge beliefs that work symbiotically for mutual benefit. This can be seen in how Doc helped Tony “class up his act,” as it were. For instance, while on the road, Doc guided Tony in helping him write heartfelt love letters to Dolores, a practice that gave him a warm feeling inside and touched his lonely spouse deeply.

In returning the favor, Tony introduced Doc to down-to-earth pleasures he never experienced, especially those of mainstream African-American culture. He also showed the often-uptight artist how to loosen up and enjoy life, something Doc had considerable difficulty with before meeting his plainspoken, unassuming companion.

However, perhaps their greatest contribution to one another was having each other’s back. Whenever Doc was confronted with the bad intentions of assorted crackers or racist cops, Tony stepped in as a gallant protector. And, when Tony was faced with legal issues of his own, Doc tapped the considerable clout he had amassed with those in positions of power and influence. But, then, such outcomes were easy to come by because of the sincere bond that had formed between the two of them. They joined forces to help one another, and the results spoke for themselves. The power of beliefs is indeed impressive, capable of yielding tremendous creations. But the magnified power of jointly held beliefs is even more extraordinary, making possible truly magnificent results, true friendship being one of the most beautiful among them. 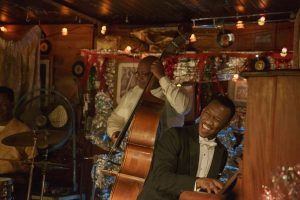 Concert pianist Dr. Don Shirley (Mahershala Ali, seated) loosens up and learns the ways of mainstream African-American culture while on a road trip of the Deep South in the new, fact-based biopic, “Green Book.” Photo courtesy of Universal Pictures, Participant Media and DreamWorks.

This superb fact-based offering hits all the right notes without belaboring its message while effectively capturing the bond that grows between the film’s two protagonists. Director Peter Farrelly has taken a big step up with this release, revealing abilities not readily apparent in many of his previous works, most of which were nauseatingly silly comedies. The excellent performances by Mortensen and Ali are punctuated by a script that’s full of laughs, poignancy and heart without hitting viewers over the head. In many ways, this film feels reminiscent of “Hidden Figures” (2016), but that shouldn’t come as a surprise, given that one of this picture’s executive producers, Octavia Spencer, was also one of the protagonists of that release (which also starred Ali). If you liked that offering, you’ll love this one.

“Green Book” hasn’t particularly caught fire with viewers just yet, but I believe that’s about to change. This underrated gem deserves high marks and well-earned honors, which are now beginning to roll in. The film was recently named best picture by the prestigious National Board of Review, and Mortensen was named the organization’s recipient of its best actor award. In addition, the film picked up five Golden Globe Award nominations for best comedy, best director, best screenplay, best comedy actor (Mortensen) and best supporting actor (Ali). The picture has also come up a winner at numerous film festivals. Look for it to pick up more accolades as awards season progresses. 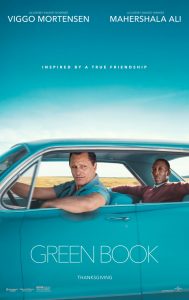 Those who scoff at possibilities that don’t seem probable at first glance can learn a lot from relationships like those between Tony and Doc. Their eight weeks on the road together turned into a lifelong friendship, showing that what we often think of as unlikely can indeed become wholly possible thanks to the power of our beliefs. All we need do is open ourselves up to the idea – and then just let it happen.