‘Shoplifters’ redefines the nature of family

What makes a family? Some would say it’s strictly a matter of blood relations. Others would contend that it’s based on emotional bonds, the kind that form through birth, adoption or matrimony. But others still might claim that such considerations are irrelevant, that being a family stems from other less common and less tangible but nevertheless significant connections, ties that keep everyone together for everyone’s benefit. These are questions raised and explored in the unusual new Japanese comedy-drama, “Shoplifters” (‟Manbiki kazokuˮ).

Making ends meet in modern-day Tokyo can be difficult, as the Shibata family would readily attest. Everyone has to contribute, but even those combined efforts barely keep the family off the streets. As the principal breadwinner, father Osamu (Lily Franky) provides as best he can by working as a day laborer on construction sites. Meanwhile, mother Nobuyo (Sakura Andô) tries to earn her keep by pressing clothes in a commercial laundry. Then there’s sister Aki (Maya Matsuoka), who contributes her share through the money she clears working at a “hostess club.” Together they share a meager residence with the family matriarch, Grandma Hatsue (Kirin Kiki), and her adolescent grandson, Shota (Jyo Kairi). 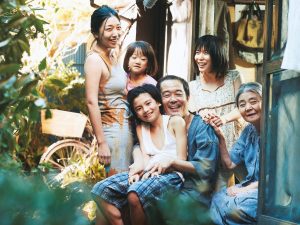 But, even for all their efforts, the Shibatas merely scrape by, living in a ramshackle inner city home in a rundown neighborhood. So, to stay afloat, they supplement their respective incomes through a questionable and unconventional means – shoplifting.

As the leader of this petty crime ring, Osamu has the practice down to an art. Working with Shota, the crafty team routinely succeeds at clandestinely swiping much of what they want and need from a variety of unsuspecting shop owners. Nobuyo, meanwhile, has become an expert at rifling through the clothes that come into the laundry, skillfully finding – and taking – whatever items of value that unsuspecting customers may have inadvertently left in their pockets. Even Grandma Hatsue gets in on the game by running a grifting scam in which she effectively – and routinely – uses guilt to fleece a young married couple for cash. Everyone has an angle, it seems, but their combined efforts all play a part in helping to sustain the household.

The Shibatas’ “shoplifting” is elevated to an entirely new level, however, one cold evening as Osamu and Shota return from one of their latest orchestrated heists. While walking through the back alleys on their way home, they find a young girl, Yuri (Miya Sasaki), alone on the street. The shivering, malnourished child appears to have been abandoned, and she offers little information about her circumstances other than the fact that she comes from a home in which her parents spend a lot of time engaged in heated arguments. Unsure how to return Yuri to her family (and whether they even should), Osamu and Shota take her in. 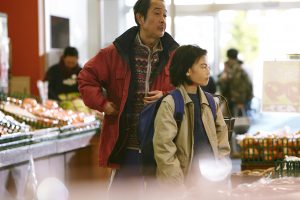 This act of compassion is met with somewhat mixed feelings when the small-time crooks return home. Clearly everyone can see that the child is in need of help, but, at the same time, Yuri’s also quietly looked upon as yet another mouth to feed in an impoverished household where resources are already stretched thin. The family nevertheless agrees to take her in, at least temporarily, but, with little to go on regarding the whereabouts of Yuri’s parents, that arrangement soon becomes permanent. And, after a time, the Shibatas come to warmly welcome the newest member of the tribe, though Osamu and Nobuyo frequently look over their shoulders in apprehension, worried that, if found out, they might be accused of kidnapping.

In no time, Yuri settles in with her new family. But joining her adoptive relatives comes at a cost – literally. So, to help her earn her keep, before long, she’s taught how to participate in the Shibatas’ supplemental income program. She becomes a valued participant in the shoplifting scams organized by Osamu and Shota. And she proves to be a natural at it, quickly learning the ropes and becoming proficient in the art of successfully ripping off retailers. Yuri makes it look easy, all the while artfully maintaining the appearance of supreme innocence. She fits right in. 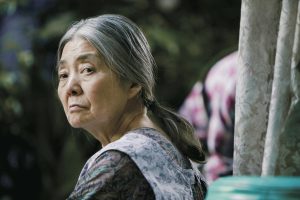 However, given how the family struggles to get by, one can’t help but wonder how long they’ll be able to keep getting away with their tricks without getting caught. Even they grow quietly concerned, especially since the stakes are now higher with Yuri in their midst, a secret that, if discovered, could land them in jail. It’s a threat that’s always with them. So, when one of their scams goes awry, it opens an enormous can of worms, not just to the caper of the moment, but also to a host of other secrets whose implications for the family’s future are staggering. What was thought to be a ring of petty thieves actually turns out to be something much more nefarious (at least in the eyes of the law). The Shibatas may see themselves as a family merely living an alternate type of existence, but authorities come to view them as something else entirely.

When faced with such trying circumstances, it takes some creativity to survive, and the Shibatas have become adept at devising alternative solutions. That’s because they’re willing to think outside of accepted conventions and push past limitations, abilities made possible by their committed belief that such outcomes are indeed attainable. This is a hallmark principle of the conscious creation process, the philosophy that maintains we manifest the reality we experience through the power of our thoughts, beliefs and intents.

Even if the Shibatas have never heard of this concept, they’re clearly practiced at making use of its principles. They’re able to envision what they seek to achieve and then come up with the means to make it happen. This usually calls upon them to consider options that are far from typical, but they’re routinely rewarded for their creative thinking, receiving the inspiration they need and ultimately attaining the hoped-for results. And, as becomes apparent through the film, this applies to more than just how they meet their basic material requirements; it has applications in a wide range of areas, including some that clearly fulfill the family’s emotional needs. 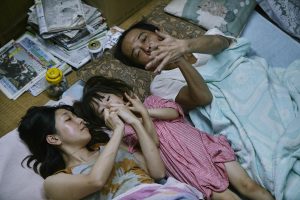 Of course, if the Shibatas are so clever at drumming up these inventive solutions, one can’t help but wonder why they don’t use their beliefs to create more favorable conditions in the first place, an existence free of the hardships they deal with on a daily basis. That’s a legitimate question, but perhaps there are other, less obvious considerations involved here, such as learning particular life lessons. For example, even though shoplifting and grifting help the family cover their basic needs, such actions are generally viewed as unethical and immoral, not to mention illegal. Can poverty be used to justify criminality? Admittedly, it’s an expedient solution, but what of the risk and responsibility? What message does such activity send to the younger members of the family? Are there options available that would help the family escape its conditions that don’t rely on such dubious tactics?

Those well versed in conscious creation realize that beliefs can be used to resolve such conundrums. However, doing so takes some innovative thinking that pushes the envelope a little more than what has been employed thus far. The answers may not be as convenient or expedient, but there’s a good chance they might be legitimate, helping the family avoid the potential liabilities associated with their current beliefs and actions.

Despite these problematic circumstances, one area in which the Shibatas have succeeded is in building a loving and mutually supportive family. Such an undertaking can be difficult under conditions as daunting as what they face, but they know they have one another to count on, and that kind of bond can help them weather adversity surprisingly well. They know the true meaning of family, and there’s a lot to be said for that. 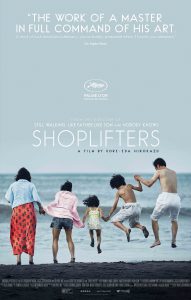 After what is a sometimes painfully slow first hour, “Shoplifters” manages to redeem itself in its second half, with heart-tugging moments and stunning revelations that evoke genuine emotions without becoming sentimental or manipulative. While the film’s first half contains subtle hints of what’s to come in its back end, the pacing of the opening act, unfortunately, tends toward tedium at times. As with many of his other pictures, director Hirokazu Kore-eda tells a story that occasionally feels like it wasn’t fully fleshed out at the time it was filmed, despite an intriguing premise and an array of ideas for insightful exploration. It’s truly regrettable that the picture lacks the consistency it needs to make it a better offering overall.

Despite these shortcomings, however, “Shoplifters” has been showered with praise at film festivals and in awards competitions over the past year. Early in 2018, the picture captured the Cannes Films Festival’s Palme d’Or, the event’s highest honor. Later in the year, the film was named one of the National Board of Review’s top five foreign language offerings. And since then it has earned nominations in the foreign film categories of the Independent Spirit Awards and the BAFTA Awards. It received comparable nods in the Golden Globe and Critics Choice Award competitions, but those nominations failed to translate into wins.

Those who face life from a different perspective than those in mainstream society frequently must contend with conditions and challenges that others don’t have to address. The need for support in those circumstances thus becomes crucial, yet, in many cases, it’s also often harder to come by. That’s where the need to manifest one’s own customized circle of kindreds comes into play, and the importance of succeeding at this can’t be emphasized enough, as one’s very survival may depend on it. But, in doing so, we must consider the questions of responsibility and consequences that accompany such efforts, for they’ll determine how well we get by – and who we rightly get to call family.