‘Knives and Skin’ charts the slow journey out of dysfunction

When we feel like we’re stuck in a rut, escape seems almost unfathomable. And, the greater the dysfunction associated with that condition, the more onerous the circumstances become. But such conditions need not be an irrevocable sentence, especially if we can find it within us to search for a way forward. These are the challenges of a group of adult and teen residents in a seemingly idyllic setting in the offbeat and arguably indescribable new offering, “Knives and Skin.” 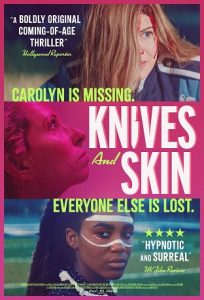 Life is a struggle of quiet desperation in a fictional community located somewhere in the assumed wholesome Midwestern confines of suburban Illinois, a place where everything should be perfect, uncannily resembling the set design of a 1950s TV sitcom. But that mythical idealized image couldn’t be further from the truth. In fact, in many ways, this nameless locale is dysfunction personified. Consider the lives of some of its inhabitants:

The mysterious disappearance of enigmatic teen Carolyn Harper (Raven Whitley) brings together the various members of a community afflicted by widespread dysfunctionality as seen in the unusual new release, “Knives and Skin.” Photo courtesy of IFC Midnight.

From the foregoing descriptions, it would seem that all of the characters in this community are terribly, terribly lost, with no clue how to get themselves or their lives on track. In fact, about the only thing they have in common is Carolyn’s disappearance, something in which they all become involved to one degree or another at some point. But, while the search for their missing friend and relative may give them some sense of purpose, they still need direction to get on with their lives and to rid themselves of the undermining behavior that’s holding them back – or sending them down potentially self-destructive paths.

Fixing that is easier said than done, however, since they all seem clueless when it comes to figuring out what’s wrong and how to go about correcting it. They almost seem fatalistic, resigned to bleak destinies without purpose, promise or direction. In short, they don’t seem to believe in anything. And, without beliefs, there’s nothing to base their reality upon, as practitioners of the conscious creation process know all too well. Given that this philosophy maintains we draw upon such notions to shape our existence, in this case, figuratively speaking, there’s nothing to manifest, because there’s nothing to work with in the first place.

How sad it is that the characters in this film are without hope. That’s mainly because they’ve come to assume they don’t have any choice in their circumstances. But, given that conscious creation can help to make virtually anything possible, that’s not true, as long as they form and embrace the right beliefs to make such outcomes possible. Indeed, as long as they can get a grip on that idea, they can begin to move forward into a new (and, one would hope, better) future.

As the film progresses, the teens and adults seem to be latching on to this notion, even if only tentatively. Viewers are reminded of this in one scene where Jesse Darlington, the teen who wants to get out of town so he can get on with his life, makes a desperate plea for this from the rooftop of his high school. The school’s faculty and his friends are worried that he’s about to commit suicide, but he reassures them that’s not the case, that he’s up on the roof so he can see beyond his current circumstances, a gesture that reassures him that there’s hope for his future, one set in a different time and place. This might seem like a simple and obvious observation, but, for someone who has been trapped by limiting and unfulfilling circumstances, this could come as quite a revelation, one that moves him closer to forging and implementing new beliefs to manifest a more satisfying existence.

Realizing that we do possess the power of choice, that we can manifest what we want when we put our mind to it, can be an eye-opening experience, especially for the impressionable. For the women in this film, for example, they begin to see brighter futures for themselves when they tap into their personal power, realizing that they needn’t settle for what they’ve been led to believe they’ve been saddled with, especially in situations where insistent men try to steamroll over them. In many ways, one could say this is a feminist manifesto embedded within the larger story (or, some might even say, a feminist manifesto complemented by atypical story threads). Either way, this is further evidence that we can change our conditions when we put our minds to it, as long as we give ourselves permission to do so.

Of course, it helps tremendously if we believe in our ability to achieve this, a belief built on faith, hope and confidence that we can succeed in our efforts. It means galvanizing our resolve to surmount the prevailing challenges. It means getting serious about what we’re seeking to attempt. And it means being willing and courageous enough to eliminate self-destructive behaviors and to rid ourselves of people, things and situations that no longer serve us; the future is not set in stone, so neither should any of these things be. By embracing such a perspective, we just might get that brighter future after all.

And then there’s the enigmatic Carolyn and her mysterious disappearance. Did she die? Did she leave town without word? Is she in hiding in a secluded place? Or did she just somehow vanish into the ether, never to return? From what little we see of her in the film, it would appear that she’s not happy with her life, either, and that she somehow takes drastic, if cryptic, steps to change that and move on to something else. Her “example” thus serves as a sort of catalyst for the others, prompting them into thinking “If she can do it, maybe I can, too,” regardless of whether or not the mystery of her disappearance is ever solved. It could be seen as a case where the outcome is ultimately more important than the means by which she operated to achieve it, something that others might be able to draw inspiration from as they seek to change their lives as well. And, given what goes on in this town, goodness knows virtually everybody could benefit from that.

Although somewhat meandering at times, “Knives and Skin” is a refreshingly experimental, eloquently metaphorical, profoundly poetic look at the joys and challenges of coming of age in a pervasively dysfunctional world, presenting a truly original story unlike anything most viewers have probably ever seen. With tips of the hat to the likes of filmmakers David Lynch, Paul Thomas Anderson and John Hughes, as well as nods to such movies as “Heathers” (1989), “Carrie” (1976) and “Donnie Darko” (2001), director Jennifer Reeder serves up a frequently absurd, often hilarious, but sincerely heartfelt tale about a community of lost souls. It’s part thriller, part horror flick, part coming of age story, part cinema noir and part campy romp, all tinged with strokes of the surreal thrown in for good measure. Exquisitely shot with inventive lighting, striking cinematography, and a production design lavishly peppered with neon and pastels, these elements perfectly complement its razor-sharp script and an atmospheric soundtrack that consists mostly of beautifully performed choral versions of pop songs from the likes of New Order, Cyndi Lauper and the Go-Gos. Admittedly, this offering isn’t for everyone, but it surely gives everybody much to ponder – not to mention an undeniable desire to want to watch it multiple times.

“Knives and Skin” played primarily at film festivals, where it received numerous award nominations, as well as a few wins. It also had a brief theatrical run last fall. Currently, it’s available for streaming on Amazon, with a DVD and Blu-ray disc release scheduled for the near future.

When life seems patently dysfunctional, we may wonder whether things will ever be “normal.” But what becomes “normal” ultimately depends on us and what we seek to manifest for ourselves. Admittedly, it may take us some time to sort it all out, especially when it comes to figuring out the questions related to choice and change. Nevertheless, we’re not irretrievably locked into anything – including dysfunction.